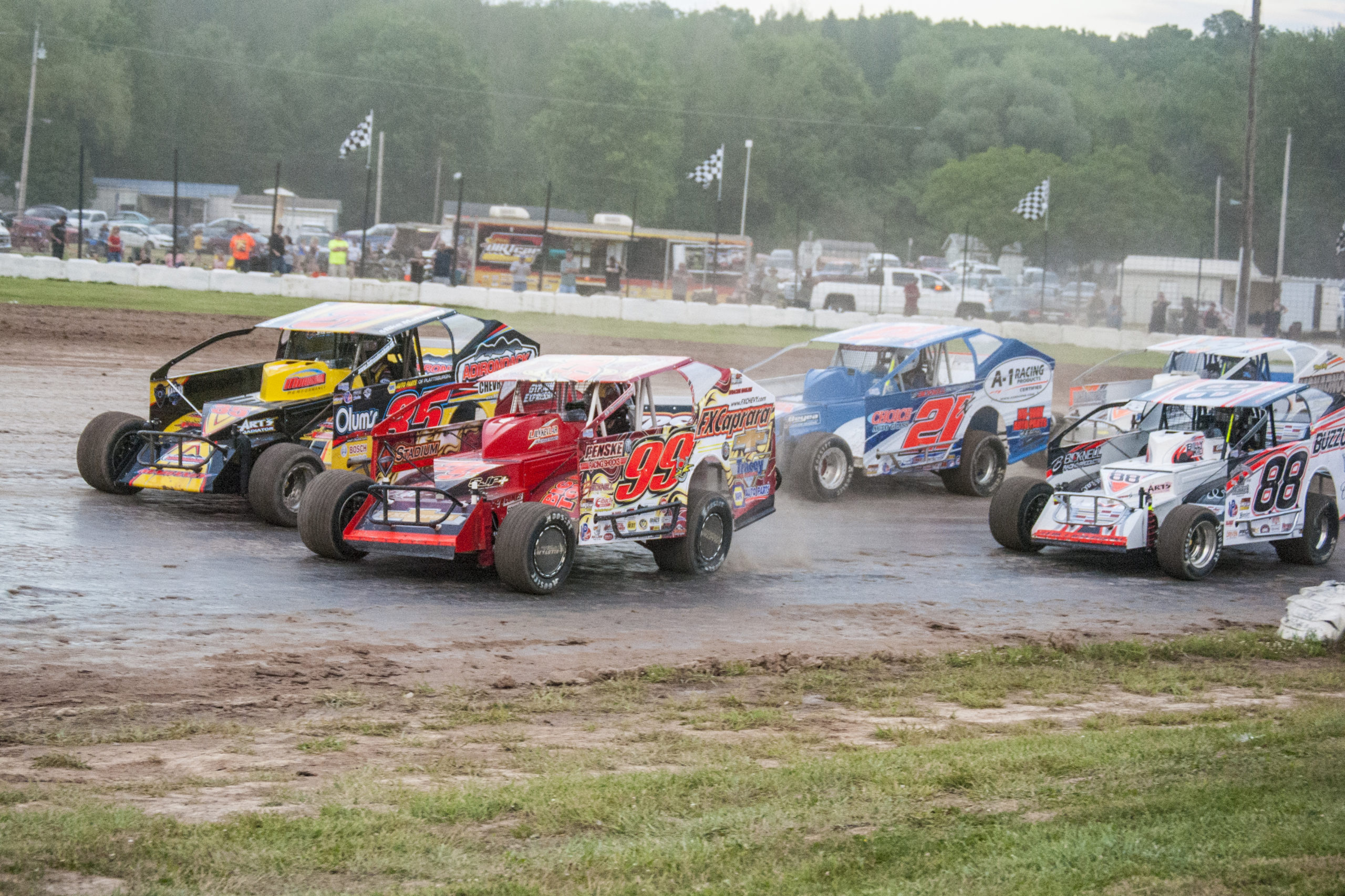 While the die-hard Big Block Modified fans of the Super DIRTcar Series and DIRTcar Northeast may not be so familiar with such a phenomenon as the DIRTcar Summer Nationals, there is a legion of the dirt track racing community that lives it every single summer, for five-straight weeks, running consecutively for the past 35 years.

The DIRTcar Summer Nationals, also known as The Hell Tour, combines 850HP Late Models with what race fans in Illinois and the rest of the Midwest know as a DIRTcar UMP Modified to create one of the most grueling regional tours in all of motorsports. With two separate tours of racing scheduled six days a week across several different states, the competition is fierce, and the tempers sometimes flare.

Drivers hit the dirt of a new track almost every single night, providing a new configuration with new challenges for every race, much like the OktoberFAST roster will see.

In many ways, DIRTcar OktoberFAST is its own slice of The Hell Tour.

To all of those DIRTcar UMP Modified fans not yet familiar with what the Northeast calls a “Modified,” consider this your invitation to watch one of the coolest and most unique divisions of dirt track racing take on some of New York’s most storied speedways.

If there’s one driver on the Super DIRTcar Series roster that knows what it’s like to race several days in-a-row on multiple different tracks, it has to be the five-time NAPA Auto Parts Super DIRT Week champion Stewart Friesen.

Friesen, of Niagara-on-the-Lake, ON, earned Super DIRTcar Series Rookie of the Year honors in 2005 and has since racked up 25 Feature wins in his career with the Series. Partnering with Halmar International for the 2016 SDS season, Friesen also made his NASCAR debut in the 2016 Eldora Dirt Derby at Eldora Speedway. This partnership paved the way for the foundation of what is now Halmar Friesen Racing, a division of the Halmar Racing Team, competing full-time in the NASCAR Truck Series.

“We have two great race teams – one on the Truck side of it and then our Modified race team has been growing the last five years,” Friesen said. “This is our fifth year together, racing for Chris Larsen and the Halmar group. It’s been good; we’ve just been kinda fine-tuning stuff.”

Through his ventures in NASCAR, Friesen hasn’t forgotten about the Big-Blocks. His Modified race shop in Sprakers, NY, provides him easy access to his dirt equipment and is within reasonable distance to some local Big-Block racing hotspots.

At times, Friesen will hit both the asphalt and the dirt in the same weekend. A NASCAR Truck Series race on Thursday, Sept. 17, was the kickoff to a Modified tripleheader for he and his dirt track team at Albany-Saratoga Speedway on Friday, Grandview Speedway in Pennsylvania on Saturday, then back up to Fonda Speedway on Sunday. This marathon-like schedule Friesen follows on some weekends certainly puts him ahead in the conditioning game as he prepares for the six days of OktoberFAST.

“We’ve got a strong bunch of teammates on the dirt car. Obviously, running six races in six nights is going to be a test. It’s going to be a lot of fun, number one, and number two – we’re glad to be getting out and putting these Big-Blocks to work. It’s been a weird season, but we’re looking forward to the six nights and I’m lucky to have a lot of good teammates that are going to be able to make the trip with us,” he said.

The east-to-west nature of the OktoberFAST schedule will give each of the teams some quality time spent up-and-down Interstates 90 & 81; a total of 437 miles from track-to-track. However, some drivers will be making special trips back to their own race shops between races, while others will stay out several nights in-a-row, much like the nature of the DIRTcar Summer Nationals.

“We’re actually going to break it up a little bit,” Friesen said of his unique travel plans. “We’re located just south of Fonda, where I live and where the Modified shop is. We’ll do Albany-Saratoga the first night and then come back to the shop. We’ll do Utica the second night and probably come back to the shop after that too, and then we’ll go out and do the Friday-through-Sunday on the road. Probably stay in the Syracuse area, get a hotel room between that and the toter.”

While Friesen and his constantly moving nature are certainly travel-acquainted by now, several of the Sportsman and Pro Stock drivers may not be in the same boat. So, allow the ironmen of the DIRTcar Summit Racing Equipment (UMP) Modified Nationals to offer up their thoughts on exactly what six-straight nights of racing involves.

Summit Modified regular Nick Hoffman, of Mooresville, NC, just clinched his second career tour championship earlier this month, coming off a 12-win campaign in his second full-time venture on the tour. He’s also a five-time champion of Volusia Speedway Park’s DIRTcar Nationals in the UMP Modified division. The UMP Modifieds have the most consecutive appearances of any division in the 12-day-long event, so Hoffman’s learned a thing or two about being prepared.

“Whether we run six nights at Volusia or the Hell Tour, or any of that type of stuff, the guys that are best prepared are always going to run up front every night. No issues each night, no problems, making sure nothing falls off – that type of stuff,” Hoffman said.

Likewise, Zeke McKenzie, of Claypool, IN, just made Summit Modified history in becoming the very first driver in tour history to reach perfect attendance in a single season. The 2020 tour has seen 26 races contested so far with only one makeup event remaining, and he’s been at every single one. He, like Hoffman, knows the daily grind of driving overnight to the next track, waking up, getting maintenance done, racing and repeat.

“It’s definitely something you have to be prepared for,” McKenzie said. “The competition is stiff, no matter what class you go to – Big-Blocks, UMP Modifieds, Sprint Cars, Late Models … You have to get your maintenance done every day and be ready to race.”

However, with the ongoing business restrictions from the pandemic, there’s been one big curveball McKenzie’s had to deal with throughout the year – finding a suitable place for services.

“What the fans aren’t going to see is the trucks parked up at the truck stop, trying to get something to eat, or finding somewhere to stay. You definitely have to have your ducks in a row to travel,” he said.

Each of the drivers on the OktoberFAST roster has their home track, but not all who register will see theirs on the schedule. Regardless of their experience at the non-home-tracks, each driver will have to learn to adapt. Racing all but three races outside of his home state on the Summit Modified tour, McKenzie’s become a pro at adapting and getting the inside scoop on tracks he’s unfamiliar with.

“If your car feels really balanced, you should be good. The biggest thing for us is we talk to the local drivers when we come in. We find out what gear they’re running and if the track’s been hard on tires or not, and you sort-of take what they tell you into play and put it to good use,” he said.

And if by chance adaptation doesn’t come right away, keeping a cool head will be key. In times of struggle, McKenzie often recalls a word of advice on sticking with it from a fellow DIRTcar UMP Modified regular.

“I go back to something Kenny Wallace told me a month or so ago – you have a different opportunity every night. So, if you run bad one night, there’s always tomorrow.”

All six nights of DIRTcar OktoberFAST presented by DIRTVision will be broadcast live around the world by DIRTVision as part of the $39 monthly Fast Pass subscription.