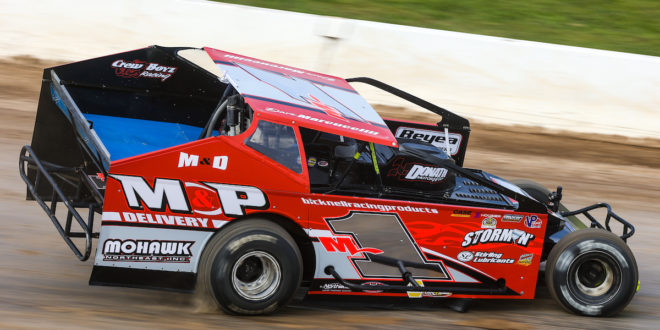 Dave Marcuccilli has collected several accolades in his 24 years of racing but for the past three years the one he’d been striving for kept eluding him.

This year, all the stars aligned for the Montezuma, NY driver, putting together strong finishes at the right time ­– including two straight fourth-place finishes during the Super DIRT Week events at Weedsport Speedway and Brewerton Speedway to propel him into the points lead. From there he held on to secure his first DIRTcar 358 Modified title.

“I thought that was a big deal,” Marcuccilli said. “I’ve been to a lot of banquets. I’ve raced it [the Series] for the three years, and this is our third attempt at it. I always wanted to win the title and up until we moved to Modifieds, we’ve gone to every 358 Series race. The goal going into it was always winning the title and it was nice to be able to do it.”

While he won the title, Marcuccilli went winless with the Series this season. That meant his consistency throughout the season had no room to falter.

Going into the last leg of the season, the points race was anything but settled. Marcuccilli was still in a tight battle with Willix II before the Super DIRT Week satellite shows.

After a 12th place finish at Brockville-Ontario Speedway, he secured enough points to finally cross the 358 Modified title off his list.

Now that that goal has been realized, he is contemplating in the off-season what is next for his #m1 machine. A DIRTcar 358 Modified Series Super DIRT Week title is still unchecked. He earned his career best Super DIRTcar Series finish this year with a fourth-place finishes at Weedsport Speedway, inching closer to a potential Big Block Modified win. But no matter what he does, Marcuccilli said he just wants wins.

“I think that’s like the biggest goal as always, to win some races,” he said. “If we don’t race weekly, then there’s no hope for a championship. So, the hope is then to win races.”

The 51st Running of Super DIRT Week will be Oct. 2-8, at Oswego Speedway. Tickets are now on sale, CLICK HERE.