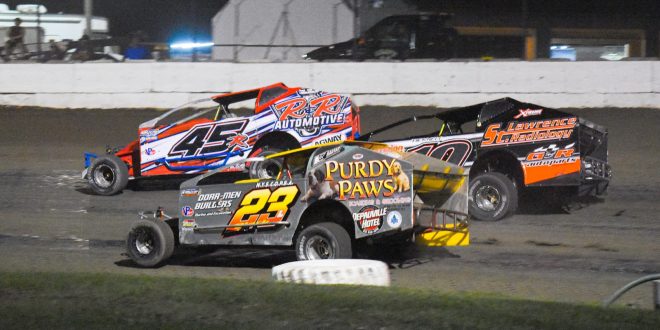 DIRTcar Sportsman Modified Hoosier Racing Tire Championship to be decided at the finish line, Sheppard, Williamson, Jeseo, Mancuso in the driver’s seat for the championship

WEEDSPORT, NY – Five divisions of DIRTcar Racing divisions compete in the Hoosier Racing Tire Weekly Championship in the Northeast and the championship battles are rapidly coming to a conclusion. DIRTcar Big Block Modifieds, 358 Modifieds, Sportsman Modifieds, Pro Stocks, and 4 Cylinders will split over $45,000 in purse money.

The top-20 drivers in the Big Block, 358, Sportsman and Pro Stocks divisions will be honored and given a payout at the DIRTcar Northeast banquet in November. The DIRTcar 4 Cylinders pay the top-15.

The DIRTcar Big Block Modified battle has a familiar look. Matt Sheppard and Stewart Friesen are locked in battle at the top of the standings for $5,000-to-win and $3,000 for second.

The #9S holds the top spot by just 20 points. Not only are these drivers going at it in the Hoosier Racing Tire Weekly Championship standings, but they are also fighting for Super DIRTcar Series points, and the overall track championship at Orange County Fair Speedway, which concludes Thursday, Sept. 2.

Mat Williamson and Erick Rudolph are once again battling for the DIRTcar 358 Modified weekly championship in both the Hoosier points and at Ransomville Speedway over the track championship. This Canadian/American rivalry has been playing out for years at Super DIRTcar Series races, DIRTcar 358 Modified Series races, and every Friday night at Ransomville Speedway. Williamson got the edge this year and took the $3,000 championship.

Billy Dunn, from Watertown, NY, is not only tied with Rudolph in Hoosier points but he is a part of a ferocious track championship battle at Can-Am Speedway with Tim Fuller, another Watertown, NY driver.

They recently clashed at Mohawk International Raceway in the first DIRTcar 358 Modified Series race of the year. With two laps to go, leader Mike Mahaney broke a right rear shock. That allowed Tim Fuller and Billy Dunn to race it out side-by-side on the last lap. Dunn won out with a dive to the inside of Turn 1. Those points could make the difference at the end of the weekend.

The closest race is in the DIRTcar Sportsman Modified division between leader Andrew Buff and Matt Janczuk. They are separated by a razor-thin margin of 10 points going into the final weekend of Hoosier points racing. Andrew Buff races weekly at Albany-Saratoga Speedway and Glen Ridge Motorsports Park. He’s also been aggressively following the DIRTcar Sportsman Modified Series races competing in multiple regions.

Janczuk’s points have come as a result of his pile of victories at Fulton Speedway. He is still in the picture for the Hoosier championship. Since the points are determined by the top-16 finishes, it is notable that Janczuk’s lowest points night is much lower than Buff’s. Janczuk can make up a whopping 16 points in one swing.

Here’s how it breaks down. Only individual drivers’ top-16 finishes are calculated so they drop their lowest score. 60 points is a win, therefore a perfect score is 960.

If Janczuk wins, he drops the 44 and scores a 60. That means Buff also needs to get a win and he has two chances; Albany-Saratoga Speedway on Friday (Sept. 3) and Glen Ridge Motorsports Park on Sunday (Sept. 5). He could go to Fulton Speedway on Saturday (Sept. 4), as well, and go up against Janczuk in person.

Chad Jeseo has been lights out at Lebanon Valley Speedway and Albany-Saratoga Speedway in ‘21. He has 10 wins between the two tracks. His DIRTcar Pro Stock Hoosier Racing Tire Weekly Championship will net him $1,000 at the banquet in November for his dedication and success in weekly DIRTcar Racing.

Sixty points behind Jeseo is Jason Meltz, who has three wins at the same two racetracks. Burton Ward has been cutting his teeth at Can-Am Speedway and has two wins so far in 2021. He’s running third in the Hoosier points with 830 total out of a possible 960.

The top-15 will have the opportunity to walk across the stage at the DIRTcar Northeast Banquet in November. Positions 11-15 receive free DIRTcar memberships for 2022.