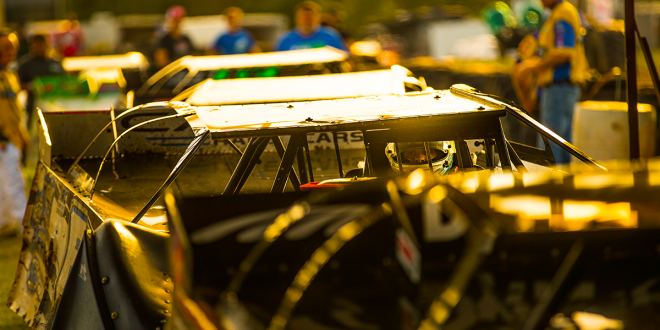 Five brand-new DIRTcar national points champions have had the winter to savor their big checks and trophies. As the 2021 regular season kicks off this weekend for several weekly tracks across the nation, the new title holders are eager to return to their home tracks in search of more championship gold.

A host of new challenges were presented to motorsports competitors across the globe in 2020 with the onset of the pandemic. With the ever-changing schedule for local dirt tracks, some drivers were forced to travel farther than usual to race. Sport Compact champion Dallas Strauch took that challenge head-on for the first time in his career and made the most out of it.

Cleaning up at his home track of Peoria Speedway with four Feature wins, Strauch also parked it in Lincoln (IL) Speedway, Tri-City Speedway, Spoon River Speedway and I-55 Raceway Victory Lane – several new venues to he and his team.

“It was definitely out of our ordinary because normally, we’d just run local,” Strauch said.  “We were going almost two-and-a-half to three hours out of our way to go run places. It was quite a wear-and-tear on us and the car, so it was definitely a relaxing, yet rewarding achievement.”

Pro Late Model champion Torin Mettille was fortunate enough to be racing right around his usual tracks last year, but with a brand-new Rocket Chassis XR1. One which he adapted to very quickly, racking up 11 total Feature wins en route to a dominant 82-point win over second place for the national title.

“We updated to a newer racecar. The program we had put together last year was just incredible. Very dominant at Farmer City, compared to what we were used to,” Mettille said.

UMP Sportsman champion Bryce Shidler faced an internal obstacle last year – one so many drivers have hurdled on their way up to the top – improving his performances enough to move up a couple more spots in the standings.

“We’ve never really set out to win the national championship until last year,” Shidler said. “Three years ago, we finished fourth and the year after that we finished second, so we moved up both times and weren’t really going for it. So, we put all of our efforts into winning it last year and it just kinda worked out.”

While most don’t have the big corporate sponsors and professionally trained pit crews, it’s their friends and family that show up to the track every week and help out where they can that make the difference. The financial contributions they get from local sponsors helps pay the bills, which also can make a big difference at season’s end.

One of the more unique pit crew-driver combos is found in the pit area of Pro Modified champion Billy Knebel Jr. With son Cole Knebel on the wrenches, this family duo found Macon Speedway Victory Lane eight times in 2020 to clinch the division’s track championship.

“It always feels good to win a championship, but the biggest thing was my crew chief, my 17-year-old son, he did all the work to the car,” Knebel Jr. said. “So, being able to put it in Victory Lane, winning 11 Features… that’s something to say.

“That boy worked that car inside and out. Dad was just able to jump in and drive it to victory. So, that made it pretty special for us.”

A stellar group of Pro Late Models from both the East and West regions gave Mettille a great run for the national title, but in the end, nobody was able to match the 11 Feature wins Mettille captured at three different tracks in 2020. For each of those wins, he credits his crew chief and father-in-law, Don Mashing.

Mettille describes Mashing’s work ethic as one of the most determined and persistent of anyone in the pit area. From working a regular day job to his late-night hours in the garage, Mettille said Mashing has been the biggest asset to his program.

“If it’s off an eighth of an inch… no, that’s not good enough. We are trying to be perfect. And that is him,” Mettile said.

Stock Car champion Lance Evans had two very big sponsors contributing to his success in one of the closest national championship finishes in DIRTcar Racing history.

“I’ve got to thank Cody Roberts at Bullet Chassis; he comes with me and helps me with anything I need. HP Machine – they built me one heck of a motor this year,” Evans told Racing Performance Media after clinching the title by a single point in the final race of the year at Charleston Speedway.

While the DIRTcar regular season kicks off this weekend, most of the defending champs are making their plans to repeat. Except one.

Strauch will be turning in his racing shoes for set of wrenches in 2021 as he plans to crew chief close friend Kenny Butterfield to a Sport Compact championship run of his own this season.

“Goals for 2021… really, just to help [Butterfield] get a championship as well. [We’re looking] to go back-to-back, a ‘Team 24’ championship,” Strauch said.

Shidler, a runner-up in UMP Sportsman points at his home track of Lincoln Park Speedway last year, plans to hit the road a bit more this year.

“The goal for this year is to try new places,” Shidler said. “We’ve won a couple track championships and we’ve won the national championship, so now we’re just going to have fun with it.”

For the father-son Knebel duo, they each share the same mentality with a lot of their competition – win more Pro Modified races. Their 2021 plans consist of nothing but.

“We just had fun. Unless you’re gonna go big-time, that’s what racing’s all about. So, that’s the goal – go back out, have some fun racing and hopefully win as many as we did last year,” Knebel said.

Catch each of DIRTcar’s newest defending national champions in a pit area near you this summer! The regular season begins this weekend, counting each race towards national point totals.