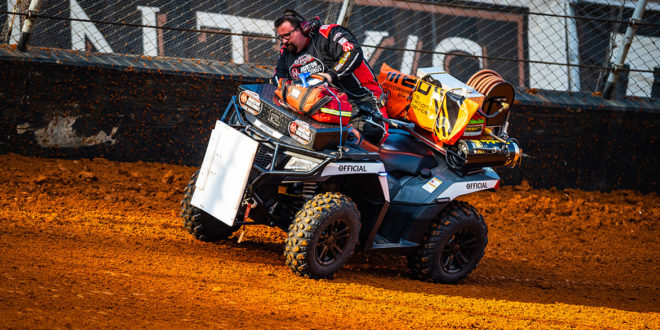 The Short Track Incident Response Program provides the same level of safety training given to crews with Formula 1, IndyCar and more

The world watched in silence and fear as Formula 1 driver Romain Grosjean and his car disappeared in a hellish dome of fire after a crash during the Bahrain Grand Prix last year. While the imagery froze onlookers, track and safety officials rushed to Grosjean’s aid.

The World of Outlaws and DIRTcar have partnered with ESI Equipment Inc. and the International Council of Motorsports Sciences to make racetrack and safety officials aware of the SFI accredited Short Track Incident Response Program in an effort to have those officials properly trained in how to handle any kind of race car accident.

“Back in the day, there are racetracks, you’d call them and you would ask them if they had an ambulance on site. They’d say, ‘Yes,’” World of Outlaws and DIRTcar Safety Director Tyler Bachman said. “They did not lie to you. The ambulance was there. But it hadn’t been moved in seven years. So, we’ve come from that five years ago to always having an ambulance there. Now, we’re trying to get the people in those ambulances to understand the cars.

“Someone on the safety crew may have never sat in a Late Model before. They might not realize there is so much sheet metal around it. Or a Big Block, they might not realize the driver sits in the middle of the car. Most of the time, if the car went for a wild ride, flipped, or hit the wall, there’s a good chance the sheet metal has folded and made for a not an easy way to get out.” The program tackles everything from putting out various types of fires to helping extricate a patient from a race car and different methods of properly flipping race cars over so the driver doesn’t sustain any further injuries. Sprint Car, Late Model and Big Block chassis are on site of each course – and they’re always looking for more used chassis to be donated, wrecked or not – so participants can see what it’s like to sit in the cars, practice getting patients out of the cars and practice where they’ll need to cut the chassis if the driver can’t get out on their own power.

In a recent class with 25 participants from the Buffalo Township Volunteer Fire Company – who serve as safety workers at Lernerville Speedway – they got to be strapped into a car, flipped over, and taught the variety of different style safety harnesses drivers where and how to undo them. Some drivers may wear a Simpson Hybrid, while others may wear a HANS device. And different models between those brands have different ways of being disconnected.

“So, a safety person, if you haven’t raced you probably don’t know how to take that off,” Bachman said. “If you look at a Simpson Hybrid Pro, which a lot of our guys have, you might not know you have to pull the strings (to get it off). You could look at it for 20 minutes and not realize how to get it off. Just stuff like that. It’s really a big awareness.

“Doing stuff in the fire service with vehicle rescue and car crashes… race car rescues are a lot different. You can’t just open a door. They don’t have a door. Fuels are different, too. With the Sprint Cars, you have methanol. You may run up to the car and not even know it is on fire. So that’s a big thing too.”

Every official with the World of Outlaws NOS Energy Drink Sprint Cars, World of Outlaws Morton Buildings Late Model, Super DIRTcar Series and DIRTcar took the course last year, and are certified by SFI – a non-profit organization established to issue and administer standards for the quality assurance of specialty performance and racing equipment. The crew from the Buffalo Township Volunteer Fire Company is the latest affiliation with the Series to take the course. The goal is to have three to five courses a year, Bachman said, for tracks across the country. He’d like to eventually see every track the series race at go through the program.

“I thought it was very comprehensive and really opened my eyes to how intricate extricating a driver can be,” World of Outlaws Sprint Car Series Director Carlton Reimers said after participating in the program last year. “I mean, who would have thought that a Sawzall with a special tipped blade was faster at cutting through a frame than the Jaws of Life. That’s only in certain situations, of course, but I would have never known. I hope we do more of this training in the future.”

There are various versions of ESI’s Race Track Safety Services to accommodate a variety of series like Formula 1, IndyCar and NHRA. While the techniques may differ from series to series and track to track with each having its own idiosyncrasies, the level of training is the same throughout them all.

“The information is consistent throughout whatever series we’re doing,” said John Evans, president of ESI Equipment Inc. and facilitator of the programs. “It’s like, why should a Formula 1 driver get something different than a dirt driver? Technically, they shouldn’t. You’re not going to get any different treatment on the street depending on what kind of car you drive. Whether you’re in an Audi or a Volkswagen, if you crash on the street, you’re going to get the same level of care no matter who is coming in that ambulance.

“That’s kind of where our thought process is. Why should it be different? It shouldn’t be different. We should all have that same knowledge and skills and technical information that make us all good responders on the track.”

In a similar program for Formula 1 safety workers, the class convinced the doctors who tail the field on the first lap to carry high-flow fire extinguishers with them. That type of extinguisher was what they used to help clear a path for Grosjean to get out of the fire, according to Evans.

“That’s the kind of information and training that we are providing,” he said. “Not only in an FIA Formula 1 situation, put to people who are responding on dirt tracks.”

He knows how important that is firsthand. One guy in his group faced an incident where a Sprint Car was upside down and on fire with the driver still inside. The fire department on site didn’t have the proper training or equipment to give the safety worker a clear path to the driver. He tried 16 times to get to the driver, Evans said. Fortunately, the driver survived but suffered 95% burns on his body. Those are the kinds of situations Evans knows need to be corrected at every level of racing. The Short Track Incident Response Program has been around for only a few years now but has become one of the most popular classes, according to Evans. More than 200 people have gone through the course, so far. Before teaming up with the World of Outlaws and DIRTcar, the majority of trainees came from the program being put on during PRI in Indianapolis. That’s where Bachman first found out about the course and realized it was something the series needed to be a part of.

Bachman has worked with the World of Outlaws and DIRTcar for nine years and has worked in the fire service since 2007. While he’s been through courses and experienced several accidents throughout his career, he said the Short Track Incident Response Program was still eye-opening.

“Any class you take, from a structure fire to a car wreck class, you learn something every time,” he said. “I learned a new technique on how to get [drivers] out. There’re new boards out called med boards. We just saw them when we were down there (in Volusia for the class) and loved how they work to get a driver out of the car. So, we actually ordered one for each Series.”

The same sentiment was shared by those who participated in the Buffalo Township Volunteer Fire Company class.

“A couple of the guys said to me going into this, ‘Ah, it’s going to just be another fire class. It’s just going to be another race car rescue class.’ Well, at the end of it, they all said they learned some new technique,” Bachman said. “They hadn’t realized you could do that, or they didn’t realize they could roll over a car that way. Most people who are doing this are volunteer firemen, or paid firemen, or doctors. If there’re one or two things every time that they go, ‘Wow, I never realized that or, Wow, that’s a lot quicker,’ I think this class is incredible and I wish every racetrack would do it.”

Another class is being scheduled during the World Finals at The Dirt Track at Charlotte in November, then, next year, Bachman would like to see the expansion of several classes in each region of the country.

“I think the more people that take this in our sport, in the World of Outlaws and DIRTcar racing, it will benefit our drivers that travel with us,” he said.

The course is available for track owners, local rescue crews, and any other motorsports affiliated company that might benefit from it. To request a Short Track Incident Response Program at your facility, or attend a scheduled class, contact: 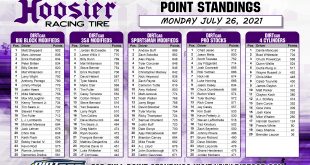