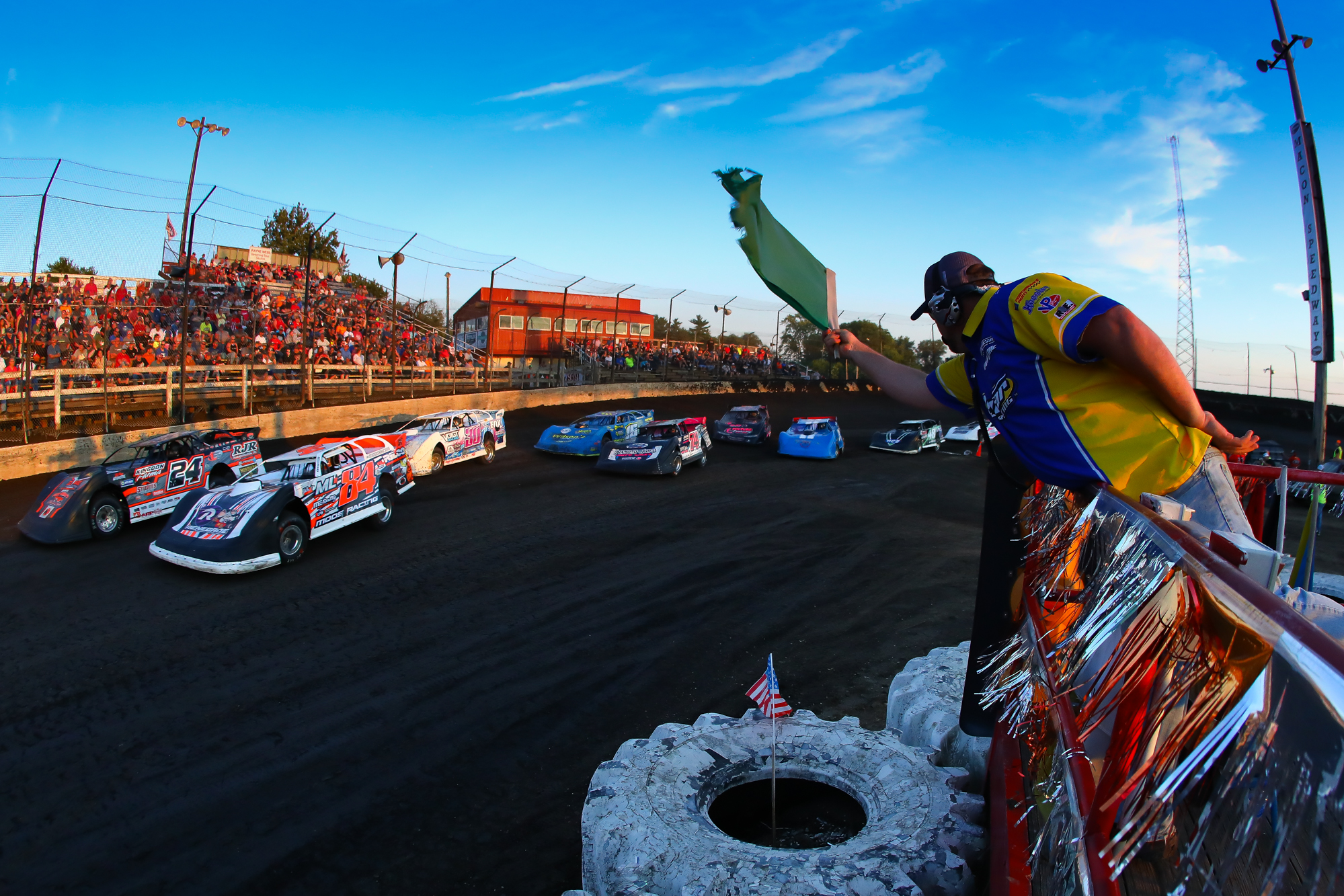 Halfway down, halfway to go. The 37th DIRTcar Summer Nationals Hell Tour has reached the midway point of the season with three weeks in the books and three more to go.

HELL TOUR CROWN JEWEL – Illinois-Indiana Week kicks off with the most prestigious race on the Summer Nationals schedule – the Herald & Review 100.

Macon Speedway hosts the Summer Nationals and Summit Modified stars on Thursday night in what has always been one of the most unique and exciting Dirt Late Model races in the world. Twenty-two Late Model drivers will take the green flag for 100 circuits around the 1/5-mile bullring for a shot at Midwest dirt racing immortality, and their photo in Decatur’s local newspaper – the Herald & Review.

Summer Nationals points leader Bobby Pierce is the defending winner. Only 24 men have conquered Mighty Macon in 41 previous runnings of the event, and with nine different winners in the first 16 Summer Nationals races this season, a 25th different name could be going in the Herald & Review 100 history books this year.

SHOWING OF SPORTSMANSHIP – After Sunday’s event at Lincoln Speedway, Bobby Pierce did something rarely seen in any sport – he gave up his pay to another driver.

After a collision between Pierce and Ryan Unzicker during their battle for the lead in Sunday’s Feature at Lincoln Speedway, both were sent to the tail of the field. The two were battling with Jason Feger and Shannon Babb for the top spot when Pierce entered Turn 3 slightly higher than Unzicker, who was hugging the bottom lane. Pierce hooked Unzicker’s right-side quarter-panel and turned him around, bringing out the yellow.

“I was going into the middle-bottom lane, tucking it in very close to Unzicker’s right side so I could try and get a good bite in that line of moisture and momentum around him through the turn,” Pierce said. “When his car started to apex, the quarter panel was right there. You see it happen a lot in Late Model racing with how big the noses are on these cars and the right quarter-panel sticks out.”

Though they both drove back to top-10 finishes, Pierce showed an act of sportsmanship after the race by declining his winnings and giving his check to Unzicker.

“I would want the same done for me,” Pierce said. “It’s just out of respect for the other racer.

“I figured if it could make his night a little better, then that’s fine with me.”

Both drivers are scheduled to compete Thursday and Friday at Macon and Farmer City.

DICE ARE ROLLIN’ – Heading into a race weekend with tracks like Highland Speedway and Farmer City Raceway on tap, Jason Feger picked the right time to build some momentum.

The 2010 champion from Bloomington, IL, is coming off a great end to Multi-State Week, scoring his first Summer Nationals Feature win of the season Sunday at Lincoln Speedway. He bested several of his fellow Illinois rivals that night, holding off the new all-time winningest driver Shannon Babb in the final laps to bag the victory.

He’ll likely meet several of those same foes again this week, but if history is any indication of his chances, he stands a great chance to win again. Three of Feger’s 22 Hell Tour Feature wins have come at either Highland (2015, 2020) or Farmer City (2016). Of the 10 seasons in which he’s won at least one tour Feature, seven of those have been multi-win seasons. This shows a trend that says once Feger wins, he’ll likely win again before the season’s out.

RETURN TO HAUBSTADT – It’s been since 2018, but this Sunday, the Summer Nationals stars return to The Class Track, Tri-State Speedway.

The famed quarter-mile oval in Haubstadt, IN, has hosted 23 Hell Tour events in its history, including its first in 1989. The last three scheduled appearances for the tours have been lost to rain, but forecasts for drier weather are projected to bring the tours back for an exciting night of action at one of Indiana’s most action-packed tracks.

LOCAL FAVORITES – Three of the four tracks on the docket this week host weekly DIRTcar-sanctioned racing and have their local contenders looking to defeat the Summer Nationals invaders.

Macon Speedway
While the track does not host weekly Super Late Model competition, it does feature DIRTcar UMP Modifieds. Coming into Thursday night – Guy Taylor, Rodney Standerfer and Alan Crowder are locked in the thick of a battle for the top spot in points, all with at least once win apiece.

Highland Speedway
In bi-weekly Late Model action at Highland, Michael Kloos tops the points with three top fives in four starts, but Tommy Sheppard Jr. has been on a roll at the quarter-mile with two wins in two starts.

Six-time Summit Modified champion Mike Harrison has been a dominant force at Highland this year, winning three times in five starts, and has won the last three Summit Modified events at the track (2019-2021). Willy Myers is tied with Harrison for most wins there this season at three, currently sitting third in points, while Jimmy Cummins leads track points with top-10 finishes in every event contested thus far.