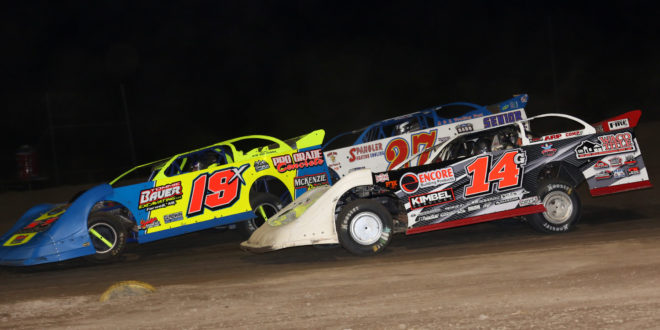 WHAT TO WATCH FOR: Michigan Rivals Take on Summer Nationals in Four-Race Tour Finale

One final week remains on the trail of the 37th annual DIRTcar Summer Nationals. A four-race stretch in the state of Michigan is on-tap, pitting the Summer Nationals stars against a tough group of local racers.

EAST SIDE BOYZ – This week, the Summer Nationals full-timers and Summit Modified pilots go head-to-head with the biggest group of rivals they’ve seen all season. The weekly racers of Michigan make up the DIRTcar Late Model East Region and UMP Modified Michigan Region, and they’re coming for Victory Lane. Below is a projected look at the top local entrants for each venue.

Thunderbird Raceway – This 1/3-mile oval is one of the most exciting tracks the tour visits in Michigan with its almost-completely rounded straightaways and several grooves of racing. Now under new ownership this year from promoter Mike Blackmer, who also owns/promotes Tri-City and Merritt, the track is set to host its fifth Summer Nationals & Summit Modified event on Wednesday. It’s home to weekly DIRTcar-sanctioned Late Models only, though the Michigan UMP Modified crowd is strong and will likely see a solid roster there as well.

Butler Motor Speedway – Standing as one of Michigan’s fastest 3/8-mile ovals, the long straightaways and sweeping corners of Butler have also come under new ownership for the first time in 29 years this season. Longtime Butler competitor Tim Wilber purchased the track from Denny Donaldson over the winter and brings the Hell Tour back for its third-consecutive visit. It’s hosted weekly DIRTcar UMP Modified racing for several years and is home to many contenders to score a win Thursday night.

Tri-City Motor Speedway – Another weekly track for DIRTcar Late Models under Mike Blackmer’s ownership, this unique racing venue features the 3/8-mile dirt track inside of an interestingly shaped half-mile paved track that now serves as the pit area for all teams. “TCMS” made its debut on the Summer Nationals schedule in 2020 before the tour returned last year.

Merritt Speedway – For the third time in as many years, Merritt will host the final DIRTcar Summer Nationals Late Models event of the season. Standing as one of the most eye-catching venues in Michigan with its grassy infield, spacious pit area and signature Victory Lane backdrop, this 3/8-mile oval is home to both DIRTcar Late Model and UMP Modified racing on a weekly basis.

GUNNING FOR VICTORY – Only four chances remain for the Hell Tour’s top rookie to get a win. But this week could be his best chance yet.

Payton Freeman has three top-fives in his last five Summer Nationals starts – the longest such stretch over any five-race span this season, showing his consistent improvement. He’ll face the Michigan regulars this week in their backyard, but he’s been racing the Illinois regulars in their backyards this whole season and has worked his way into third-place in the standings as a result.

99 PROBLEMS – The Summer Nationals stars will face a hungry field of Michigan drivers in their homeland this week, but that also means those weekly racers have to deal with the invaders. One of whom has been a problem for the locals on several occasions – Frank Heckenast Jr.

Heckenast is scheduled to attend both Thunderbird and Tri-City this week, shooting for career win #6.