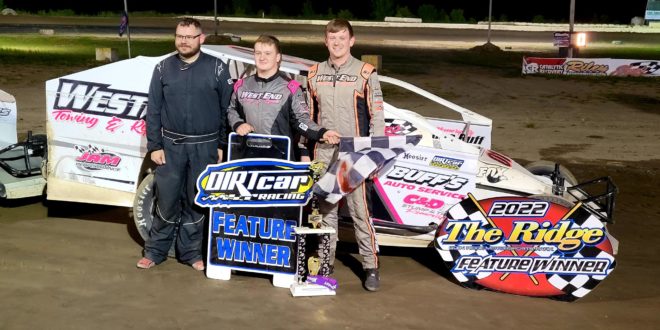 FULTONVILLE, NY – The Buff family is synonymous with Glen Ridge Motorsports Park.  Each week Andrew, Justin and Zach Buff compete in the DIRTcar Sportsman class.  Of the three, Zach would be considered the driver with the least experience in the popular division.

When the checkered flag dropped at the end of the 40 lap East Region Series event, it was Zach collecting the $1,000 top prize.  To make the story even more entailing, he beat the eldest of the three Buff’s, Andrew by a narrow margin thrilling the crowd in the stands.

For Zach, it was a statement that he can be considered in the same breath of his brothers and the biggest win of his young career.  And as mentioned, it sure didn’t come easy.  Lapped cars were in front of the duo for the second half of the event.

“That was tough!” dead-panned the youngest Buff on the event that was slowed by just one yellow on lap 12, “I really didn’t know where to go and then I saw him (Andrew) under me and that made the end really crazy.”

It was the final 10 laps that saw Buff and Buff with three lap cars right in front.  It was edge of your seat moments.  “They (lapped cars) were doing what they needed to do, they were side by side most of the time so I just had nowhere to go,” Zach continued, “I was looking high and looking low. I had speed but not quite enough to be past them easily.”

The break Zach needed came with two laps to go, a lapped car went low and opened up the high lane which was taken full advantage.  “When that car went low, I knew I had to take advantage then and it worked.”

As the double checkered flag waved, It was Zach ahead of Andrew by less than a car length.  For Andrew, he was happy for his younger brother but he still wanted to win.  “Oh yea I gave him all I could,” noted Andrew, “But Zach was fast and so where the lapped cars.  I could get under him a few times and maybe could have took a chance but I thought better of it.  Last thing I want to do was take us both out.”

Andrew went on, “I wanted to do, absolutely but I’m happy for Zach, he earned it.  It’s a big win for him and to do it in a Series race where there is some outsiders here taking on the regulars. It makes it even a bigger win.”

Track regular Cody Ochs stayed in third virtually the entire race.  While when an event had the final 28 laps go non-stop like this event.  Most would want a caution to see where they stand with the leaders.  For Ochs, it was the opposite.

“Nah, I had nothing for them.  I was hanging on, my tire seemed to go away a bit so the yellow would have gotten me out of my rhythm,” said Ochs, “I figured a yellow would put someone right on me and I didn’t know what car I would have had on the restarts so I was good with it staying green to the end.”

Justin Buff made for three family members in the top four with Ricky Quick rounding out the top five.  With his fifth, Quick also took home a free Hoosier Tire.

The next event on the Eastern Series will be Saturday, July 30th at Bear Ridge to make up for the May 15th rain out.  Then returns to Glen Ridge on August 21st. 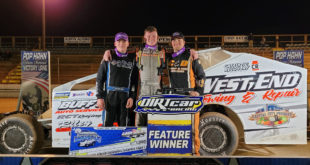