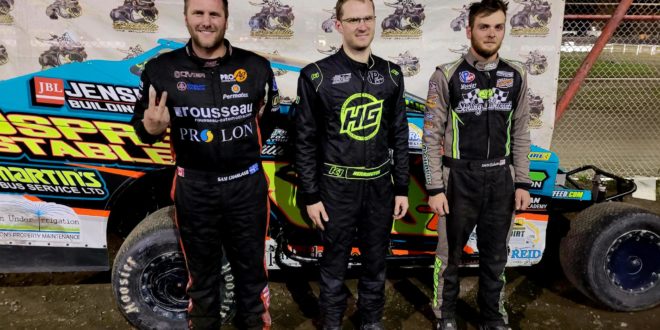 For Verona, Ontario’s Bobby Herrington, the annual Fall Nationals at the Brockville Ontario Speedway completed a full domination of the DIRTCar Sportsman class at the Paul Kirkland promoted oval.  He won both 50 lap features on the weekend and his victory on Saturday night came in the Series’ final event which netted him $2,100 in winnings.

Both Cody McPherson and Zach Sobotka came into the night with a shot at the 2022 DIRTcar Sportsman title.  Sobotka with a fine effort to place on the final spot of the podium, however McPherson was right behind in fourth to back up his championship he also won in 2012.

For Herrington, the $3,100 weekend sweep were wins #8 and #9 on the year.  While always a top contender, this was a season to remember.  “We just hit it right almost every night.  There are so many good cars here weekly too and to have this much success we didn’t really think it was possible,” said a happy driver in victory lane, “The track most nights was racy, and you just had to find a groove where you’re comfortable.  I have a lot of laps here, maybe more than most and I just think that helped a ton.”

For Saturday night’s Series event he redrew sixth and with name like Sobotka, Powers, Gauvreau and others starting in front, he knew he had work to do.  “Jessica (Powers) and I had the most laps here but there were some of the best starting with us.” Herrington went on, “The feature though was 50 laps.  They can go by quick here but with so many cars starting you had to figure there will be some cautions.”

Herrington did show a combination of speed but also patience.  Making his passes where there was room and not taking chances.  By lap 21 he disposed on Gauvreau for second and then began the chase of a very fast Samuel Charland.

“He (Samuel) had real good speed, but I could get good restarts and stay right on him,” the eventual winner continued. “I got past him but then he found a lane on the top and got along side of me a few times.  I actually didn’t expect that.”

Charland wasn’t going to bow down and several laps were side by side until the caution lights shined one more time.  “On the next restart I decided to change my lane a bit and I guess it worked.”

It worked indeed as when the checkered flag flew, Herrington won by several lengths over Charland.  The second-place finisher though was far from unhappy.  “This is a real good run, I’m very happy.  Yes, you want to win but second is also very good.”

For Sobotka, the 2021 Oswego DIRTcar Sportsman champion, a third-place finish and second in overall points showed a true team effort after a fire devastated the race shop and family business in the spring.

McPherson’s second title came with more pride for the fast St. Catharines, Ontario driver.  “This one I did on my own so yes it does mean a little bit more.  I ran for some great owners over the past few years but about three years ago I wanted to go on my own and try for the title again,” said the 2022 champ, “I had my team ready but then COVID came so I had to wait.  This year the border opened up some so I knew I could travel.”

Just seven days prior he was holding a $4,000 check at Oswego for winning the Chevy Performance 75 and now crowned overall champion, McPherson admitted it was a dream season.  “Oh man, what can you say.  You have goals but you just don’t know how they will turn out,” McPherson explained, “We started from the very first race.  We knew what we had to do to get the most points and what races we needed to make this all happen.  It just worked out and thanks to all that helped me as well.  What a year.”

Gauvreau’s fifth place finish clinched third place in the Series points.  That points finish made for the state of New York along with Ontario and Quebec, Canada represented in the top three.  Rounding out the top ten were William Racine, Shane Stearns, Power, who takes fifth in the overall Series points, Spencer Smolders and Gilles Godard. 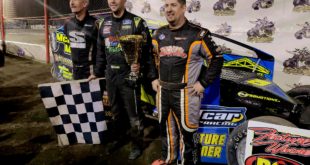