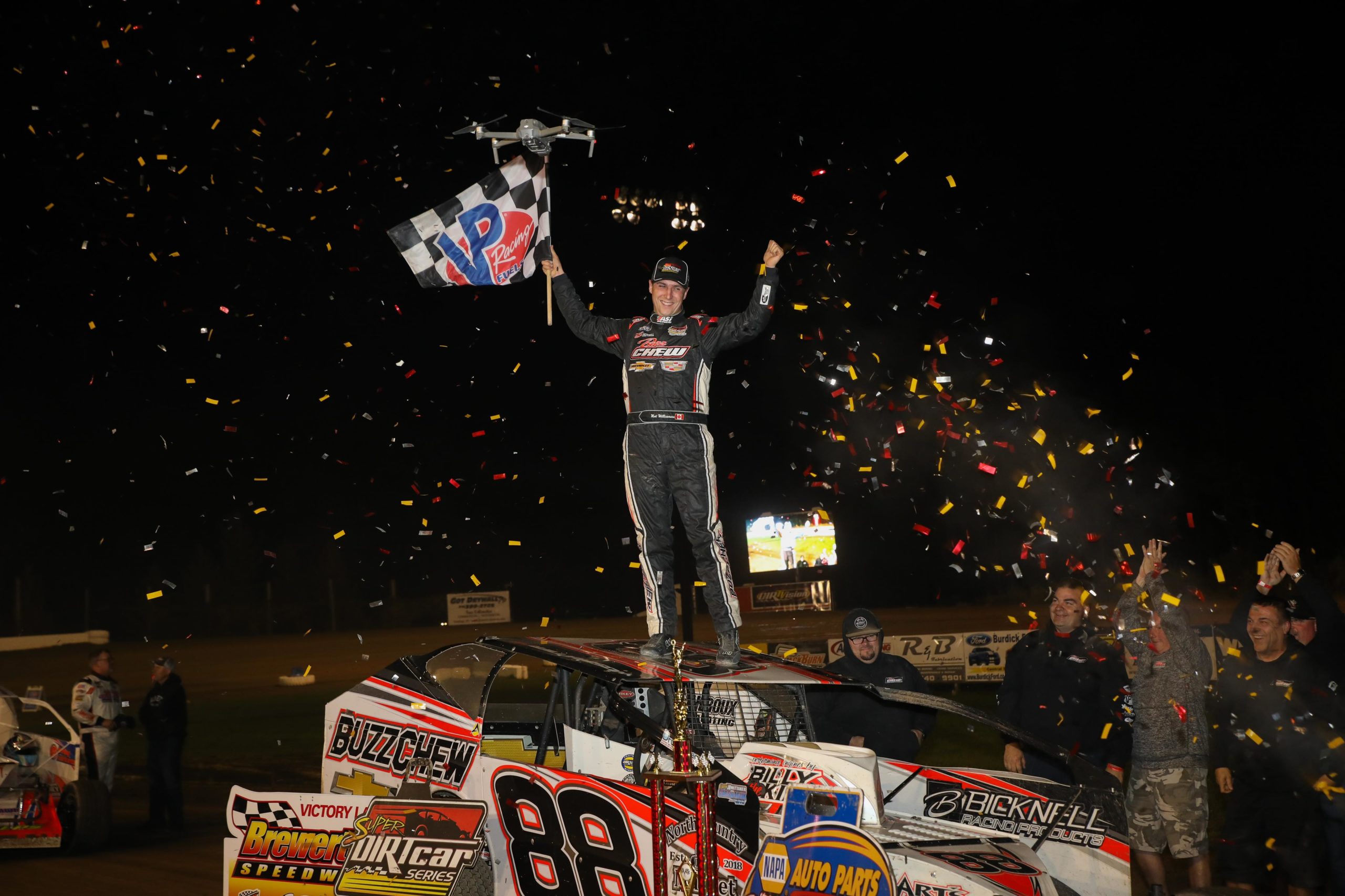 BREWERTON, NY – Mat Williamson has had a demon on his back throughout the 2021 Super DIRTcar Series season, but on Tuesday night at Brewerton Speedway he crushed it.

Giving a needed boost to his season, Williamson outdueled race-long leader Larry Wight for the lead in the closing laps and held off 2021 Brewerton track champion Jimmy Phelps and Australian Peter Britten to claim the $10,000 top prize and the final guaranteed Billy Whittaker Cars 200 starting spot.

Coming off the huge win at Fulton Speedway – becoming the first Canadian to win the Outlaw 200 – Williamson has the mindset of a winner going into the biggest week in Northeast dirt racing: NAPA Super DIRT Week (Oct. 6-10).

“Racing is mental,” said Williamson, who lives in St. Catharines, ON. “Anyone that says it isn’t is lying. You get to these races and if you start sixth and finish 12th it’s not a good feeling and it sticks with you. When you line up to go racing and you look around thinking you can’t beat these guys, you have a problem. I’ve got my head right and I feel like we are getting closer to the top. We just need to ride the wave as long as we can.”

The Buzz Chew Chevrolet #88 started fourth and never fell out of the top-five. Williamson raced hard with Phelps, Britten, Chris Hile, and Matt Sheppard throughout the race until Williamson moved into the second position and began to run down leader Larry Wight.

The track conditions were ideal for putting the power down, however it still had some character.

“There were some pretty big holes and if you didn’t drive around them you were in for a treat,” Williamson said. “You just had to hit them right.

“It was fun to race. This is always a fun place to race at. With all the weather they had, this is a pretty damn good race track.”

Once Williamson made it up to second, the battle was on for the win with Larry Wight. Lighting Larry started on the outside pole and led the first lap, passing pole-sitter Roy Bresnahan for the lead. Late race restarts saw Wight and Williamson timing their drag race launches down the frontstretch.

“On some of the restarts Larry [Wight] would try to crowd me to the top and I would try to drive around them but then diamond the corner off too,” Williamson said. “We had a great race going and it’s unfortunate that he broke because we would have had a good battle to the end. But we’ll take it.”

Williamson knew how he had to make the pass happen and was pushing the envelope to stay side-by-side with the #99L.

“I was just trying to stick with him at the flag stand,” he said. “The two restarts before that he got a car length on me. I thought that’s what it would take to get to the top side of Turns Three and Four because that’s where I needed to be. We had some fun head games going on the restart there but we race together a lot. He got the better of me.”

Not only did the big Brewerton win come at the right time in the season but it also came with some insurance for the Billy Whittaker Cars 200 on Sunday, Oct. 10: a guaranteed starting spot. But that was the last thing on Williamson’s mind when it came to the 200.

“I feel like if we have to rely on a guaranteed start then we are in some trouble,” Williamson noted. “Our goal is to start that race upfront but it is nice to have the guarantee just in case.”

Phelps, from Baldwinsville, NY, took Brewerton Speedway’s 2021 track championship so the Demon 100 has been circled on the Baldwinsville Bandit’s calendar since the announcement. Phelps stayed in the hunt for the lead all race long, never letting the top two gap the field.

“It seemed whenever anyone would start pulling away they’d hit a rut and you’d catch right up,” Phelps noted. “I thought I was a little too conservative really.”

Phelps won one Hoosier Racing Tire Weekly Championship race at Brewerton this year and collected 12 top-fives. He’s used to a dry, slick surface at the D-Shaped Dirt Demon. But on Tuesday night, the Demon was hungry and wanted to eat.

“The traction we got here tonight I think evened the playing field,” Phelps said. “Normally, on a Friday night we are inching around this place looking for grip every night. That’s what makes this place great. Tonight was a different animal. We actually ran the same setup we normally do. I just had to drive it different.”

The podium finish is a huge boost to the HBR team going into the rest of the busy NAPA Super DIRT Week.

“Honestly we’ve been pretty drab on the tour so to start out Super DIRT Week with a nice finish is a good thing,” Phelps noted.

For most of the 100-lap clash, Peter Britten, from Brisbane, AU, was side-by-side with another car in Top Five including seven-time Series champion Matt Sheppard.

“You know what’s great, is that they drive you hard and if they can get a position on you they’ll take your line and you’ll have to yield,” Britten said. “But they won’t put you in the wall. That’s the thing I love the most about racing with the Series. If you are fast enough you can be at the front, have a dogfight, and not even touch.”

And what a fight it was. Britten managed to come away with the podium finish after losing power steering on lap 20. He was visibly worn down after getting out of his #21A Big Block.

“The track was kind of heavy,” Britten said. “There’s a lot of load on the car here. I think my brakes were even struggling too. You gotta get on them heavy in Turn One so you are really using them. I probably used the brakes more here than I have all year, apart from Lebanon Valley. I was kind of losing the pedal a little bit.”

Tim McCreadie made his first Super DIRTcar Series since 2019. He drove himself into the redraw in his Heat Race, drew the 12th starting position and managed to hang on for a 10th place finish.

Erick Rudolph, from Ransomville, NY picked up 12 spots for the Hard Charger award. Rudolph started 17th and picked his way through the high-quality field to finish seventh. 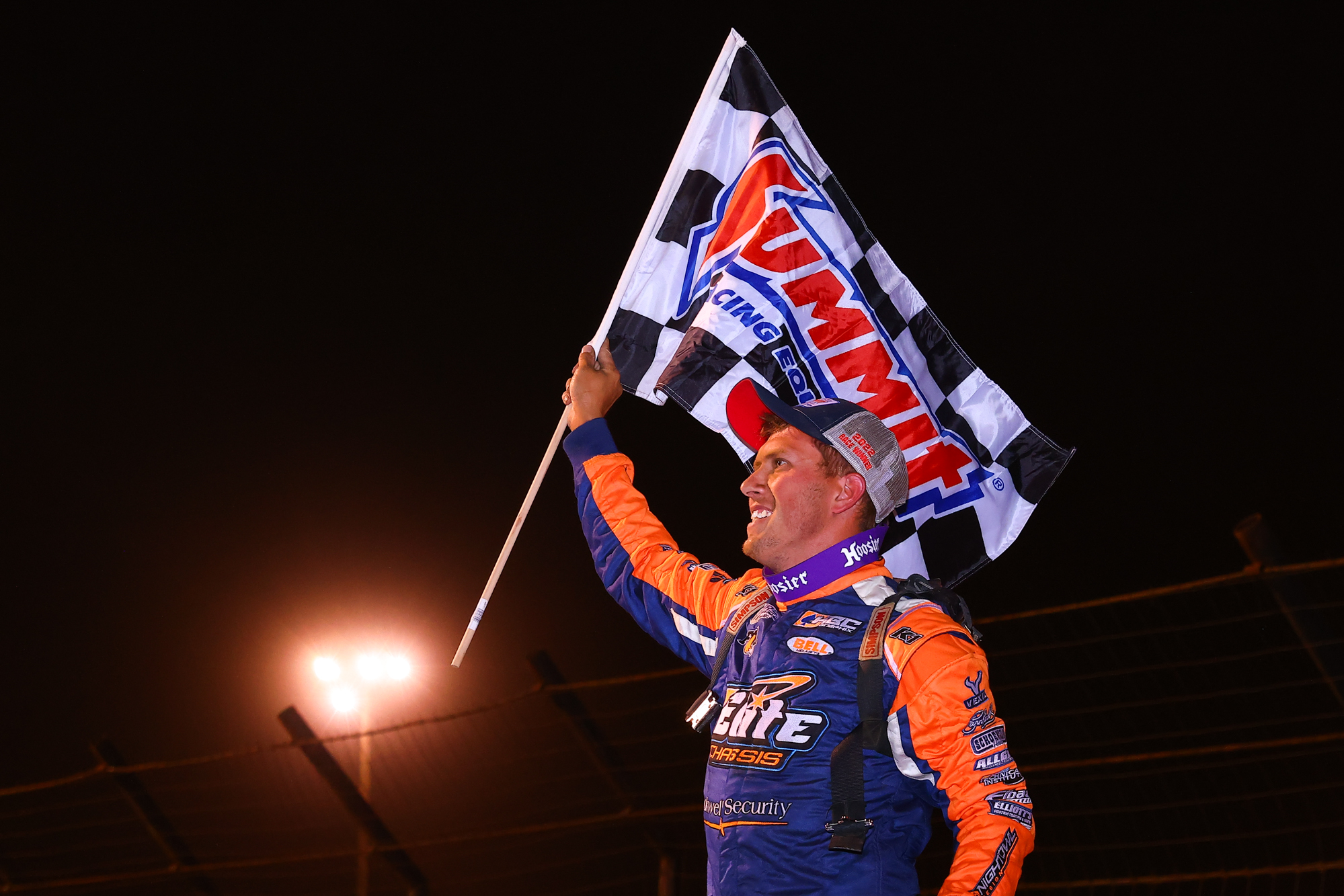 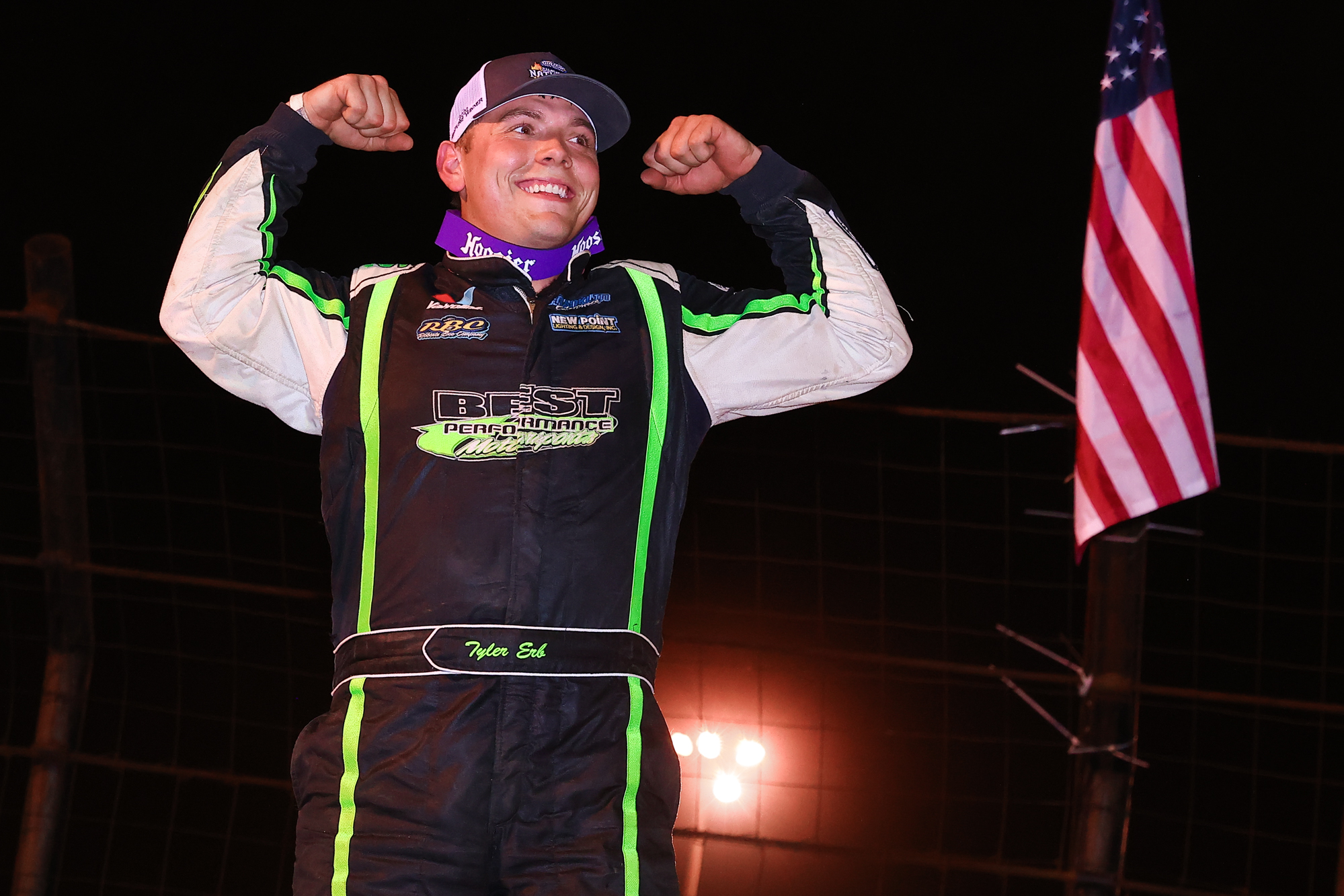