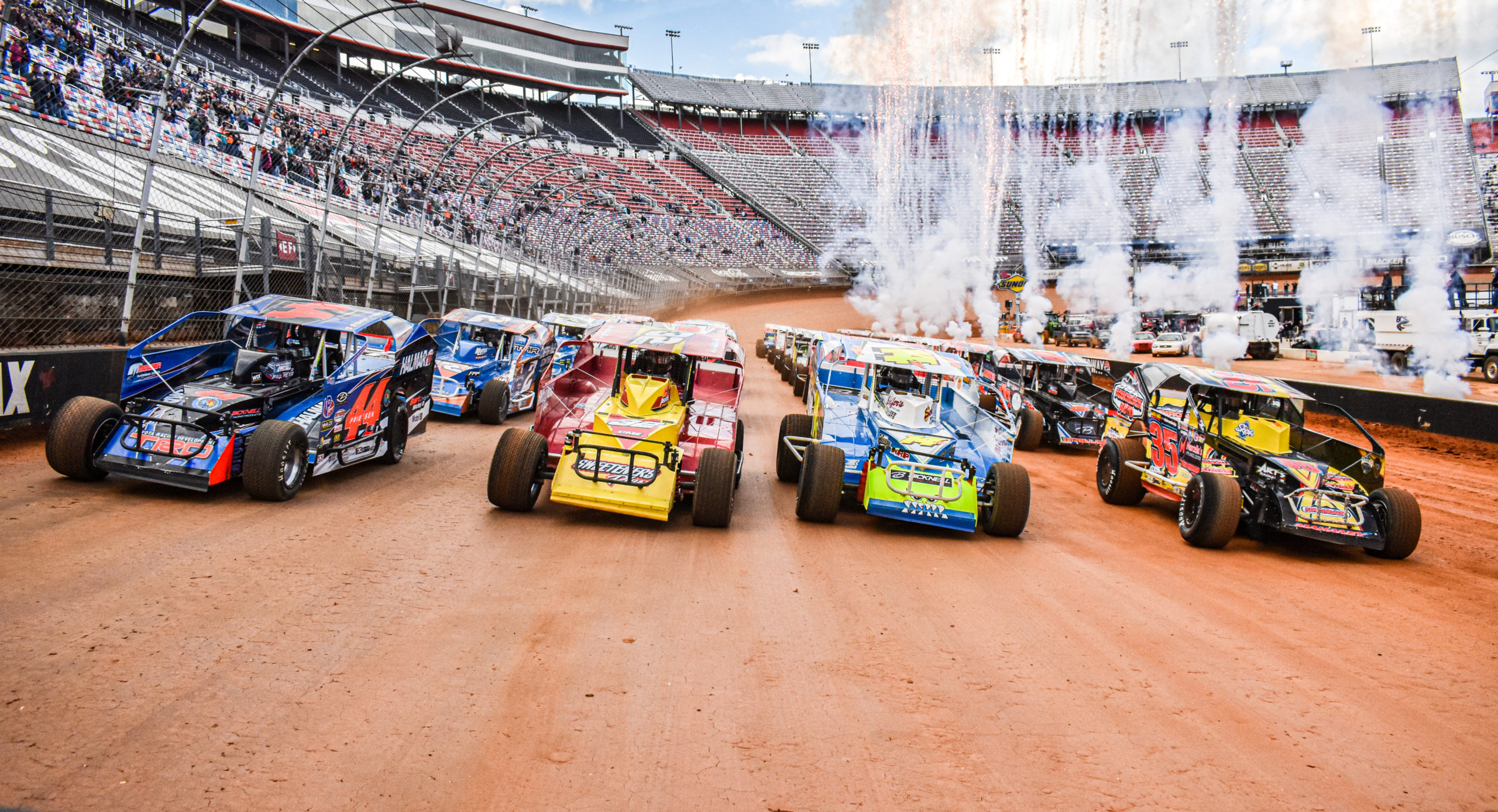 DOTTING THE I’s AND CROSSING THE SWORDS: Friesen Doubles Up at Thunder Valley

The victory was also his third Series win in a row – the first driver to accomplish that feat. The Halmar #44 finished ahead of second and third-place finishers, respectively, Demetrios Drellos in the #111 and “Mad Max” McLaughlin in the #32C.

“The Last Great Colosseum” provided the perfect stage for Big Block Modifieds to put on an unforgettable show. While Friesen may have swept the weekend, the racing was intense throughout the entire field. Between great track preparation and the superior Hoosier Racing Tires fitted on Super DIRTcar Series Big Block Modifieds, drivers could make moves from the top to the bottom of the famed half-mile throughout the 40-lap Feature.

“It was a great weekend,” Friesen said, grinning. “Proud to be here. Proud of our division to be here. I am really proud of my crew chief, and Chris Larsen, and the whole Halmar race team. It’s a pleasure to work with those guys.” No one knew what to expect from the dirt-covered Bristol but Friesen has more laps on it than anyone else after competing in both the NASCAR Camping World Truck Series and Cup Series races.

But Big Block Modifieds are their own unique animal.

“It’s neutral ground so we don’t have any notes to go off,” Friesen noted. “Our tires are so much different than the Goodyears we ran on the truck and the Cup car. The track responded differently. There was a little character in Turns 1 and 2. It had a little bit of a chop that made me tight. We were pretty tight but as long as I didn’t make a bad corner we were good.”

For the second race in a row, Mike Mahaney of King Ferry, NY, drew the SRI Performance pole and picked up a $500 bonus for his trouble. Friesen lined up on his outside of the #35 Huttig Racing machine to start. At the drop of the green, the chase was on as 31 Big Blocks poured through the highbanked Bristol turns.

Mahaney cultivated a lead in the early going but the #44 was soon making his presence known. Friesen struck early but Mahaney fought back and reclaimed the lead.

But then, smoke began to puff from the front of the #35 and for the second race in a row, Mahaney fell from the lead and out of the podium.

“The power steering problem didn’t cause us to slow down but it did get tougher to drive,” Mahaney said. “We had a really fast car all weekend and there were a lot of positives to build on. It’s great having the points lead going into Bridgeport.”

While Mahaney battled his issue, both had to navigate their way through heavy lap traffic.

“It was close,” Friesen said. “It was a lot of fun. We put on the hard compound and waited for it to come in. The lapped traffic was pretty wild. I was trying to set up Mahaney in traffic and got bottled up and he got by me. He was really fast. I think he had a power steering problem. I can’t imagine turning a lap around here without power steering.”

A power steering issue is exactly what plagued Mahaney, who is currently the highest full-time driver in points. Friesen took advantage and worked his way around the outside of Mahaney for the lead. From there, he was off to the races, cutting through lapped traffic to keep his advantage. Demetrios Drellos, from Queensbury, NY, started fifth and stayed toward the front of the field all night. Friesen’s lead was far from comfortable, especially when lapped traffic as fast as Peter Britten in the #21A came into play.

“It was tough,” Friesen said. “I got to Britten there. He was opening up his entry so I couldn’t get on the outside of him. I’d hit the cushion once good and then miss it the second time. It was a challenge. I got underneath him and on that last lap I didn’t know what to do. I just let it slide for the fence in Turn 4 and was thankful Drellos wasn’t any closer.”

“I don’t know what the top speed was at the end of the straightaway but we went back to our Syracuse notes and used some aero stuff that we did there,” Friesen noted. “I knew it was going to be fast. It was fun. There is nothing like driving one of these things wide open. It’s just an awesome feeling. Hopefully we can do it again next year. Drellos has had a shaky start to the 2021 points season with a DNF during the season opening race at Can-Am Speedway and 25th place finish in the first Bristol Throwdown Feature after making race-ending contact with seven-time champion Matt Sheppard.

But in this race, Drellos was in on the money.

“The car was about as good as it’s gonna get,” Drellos said. “I couldn’t really ask for anything else. Maybe if the lapped cars played a little better or had a luckier redraw but I couldn’t ask for anything more. Friesen was hammering the top which is probably why he lost a little speed late. I was rolling the bottom probably 35 of the 40 laps other than to get by lapped traffic and then I went in the middle. The grip never really went away.”

There are still 24 points races left but Drellos is eager to get the show on the road and dig out of his hole. A second place goes a long way in doing that and he now sits 14th in points.

“This is a good boost for the whole team,” he noted. “Whoever thought we were going to race at Bristol let alone be in contention to win at Bristol? It gives us some momentum going into Bridgeport. We’ve had a really rocky start to the year even going back to speed weeks (OktoberFAST) last year.”

The final step on the podium was filled by 2021 DIRTcar Nationals Big Gator champion Max McLaughlin, from Mooresville, NC. The driver of the #32C was in Drellos’ tire tracks across the line and was also reeling in Friesen as well. “Mad Max” wants another chance at a Bristol sword.

“I hope we get to come back because that was awesome,” McLaughlin said. “From my point of view, the track was as racy as it could get for a daytime show. I think we were almost three-wide for the lead there. I said yesterday that this place is more fun on asphalt so I gotta take back my words there.”

McLaughlin had a shot at the lead when lapped traffic entered the picture.

“I think we were both better,” he noted. “If there were more laps we were closing in really good. I think we found the middle before anyone else did. Friesen was up top. You could go anywhere. I was running the bottom early. I felt good on the bottom. But you could run anywhere.”

“The Hile Driver” Chris Hile, pilot of the red #5H, started the night out on top by setting the quickest lap during Time Trials awarding him the Billy Whittaker Cars Fast-Time Award.

NEXT UP: The Super DIRTcar Series invades Bridgeport Speedway to decide who will be crowned the King of the Big Blocks. Mat Williamson, Matt Sheppard, Larry Wight, and more will go toe-to-toe against New Jersey/Pennsylvania favorites like Ryan Watt and the legendary Billy Pauch.