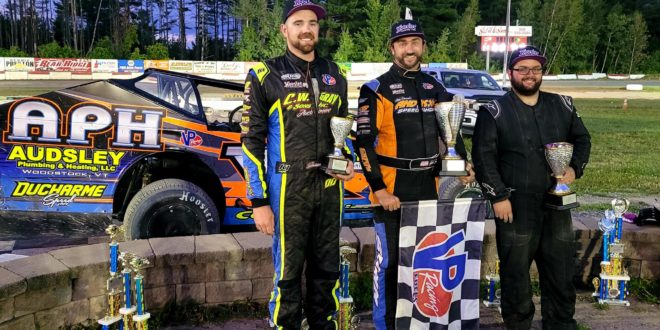 The month of July has been pretty good for White River Junction, Vermont’s Josh Sunn.  In a matter of two weeks, he’s collected his two biggest wins of his career.  The later was captured at the Bear Ridge Speedway where he won the DIRTcar Sportsman East Region feature event and the $1,055 prize that went with it.

This victory came off the heals on winning the USAC-DMA Midget event at the New Hampshire Motor Speedway’s Flat Track which rewarded his a cool $3,000.

“I’ll tell you, this has been a really good stretch, to get the two biggest wins of my career in a short time is pretty special,” Sunn said with a big smile, “While the midget race did pay more, this race had so much more competition and what we run weekly.  To win a Series event at Bear Ridge is something we will remember.”

Sunn did redraw the pole position for the 40-lap event and his car immediately opened up a good distance on his other rivals.  Three cautions nor lapped traffic was going to stand in his way.  While that sounded easy there still plenty of concerns.

“You just never know who is behind you and then when you come to the slower cars you’re always worried that someone has a better line and sneaks by you,” he went on, “The outside was tricky, I felt comfortable going around the lapped cars early but during the end of the race it got harder.”

The event all came down to the final caution on lap 38 which made for a green, white, checkered finish.  “I really wasn’t sure if I wanted that yellow, but I just wanted to do my thing.  I felt I had a good care coming off the corners,” Sunn detailed his strategy, “So I just got the car strait on the start and wanted to get the good drive off.  Luckily it worked.  We have had so many good runs here lately, top three every race and this one just ads to it.”

Matt Lashua sits second in Bear Ridge DIRTcar Sportsman points and seems to dig deeper when the Series comes to town.  This night was no different going from third to second on the last restart to claim another Series podium at quarter-mile in Vermont which is celebrating its 55th Anniversary.

“It was a good race for us.  The last restart helped, and we got second, not sure what we would have had for Josh.  Needed more laps I guess,” said the driver with quiet demeanor, “The track has been tricky on the outside so I had to be quick to make a move.  We just didn’t quite have it but I’m happy, the car was good.  Good run.”

Defending track champion and current point leader Jason Gray started in tenth but pick his spots to methodically move through the field and was up to second on the lap 38 caution.  While most time you hear a second place runner wanting a caution, this wasn’t the case for Gray.

“Yea, I think I might have snuck up on Josh, we were closing and then the yellow came out,” Gray continued on the end of the event drama, “I then just lost the momentum I had and restarting on the outside was tough to get that momentum back.  You needed a few laps to get going.  I lost second but it’s what happened at the end.”

Gray has been the face of Bear Ridge for a few years now and is proud to see the competition growing over the last few years, “I’ve been helping the others when I can and they have been doing a real good job getting their teams to step up,” he went on, “Look in the pits now, look at the competition here.  You didn’t have this a few years ago.  Tonight we had a good field of cars and all of them have good cars and speed.  It’s tough and fun here weekly.”

Behind the front trio at the checkered were Kevin Chaffee and Jeremy Huntoon rounding out the top five.  The next five was made up of Robert Tucker, Ryan Christian, Todd Buckwold, Joey Scarborough and DJ Robinson. 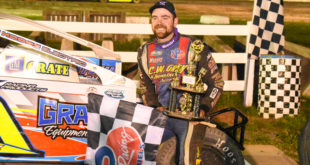 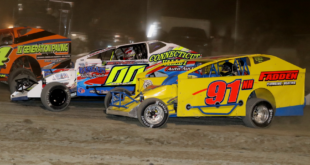