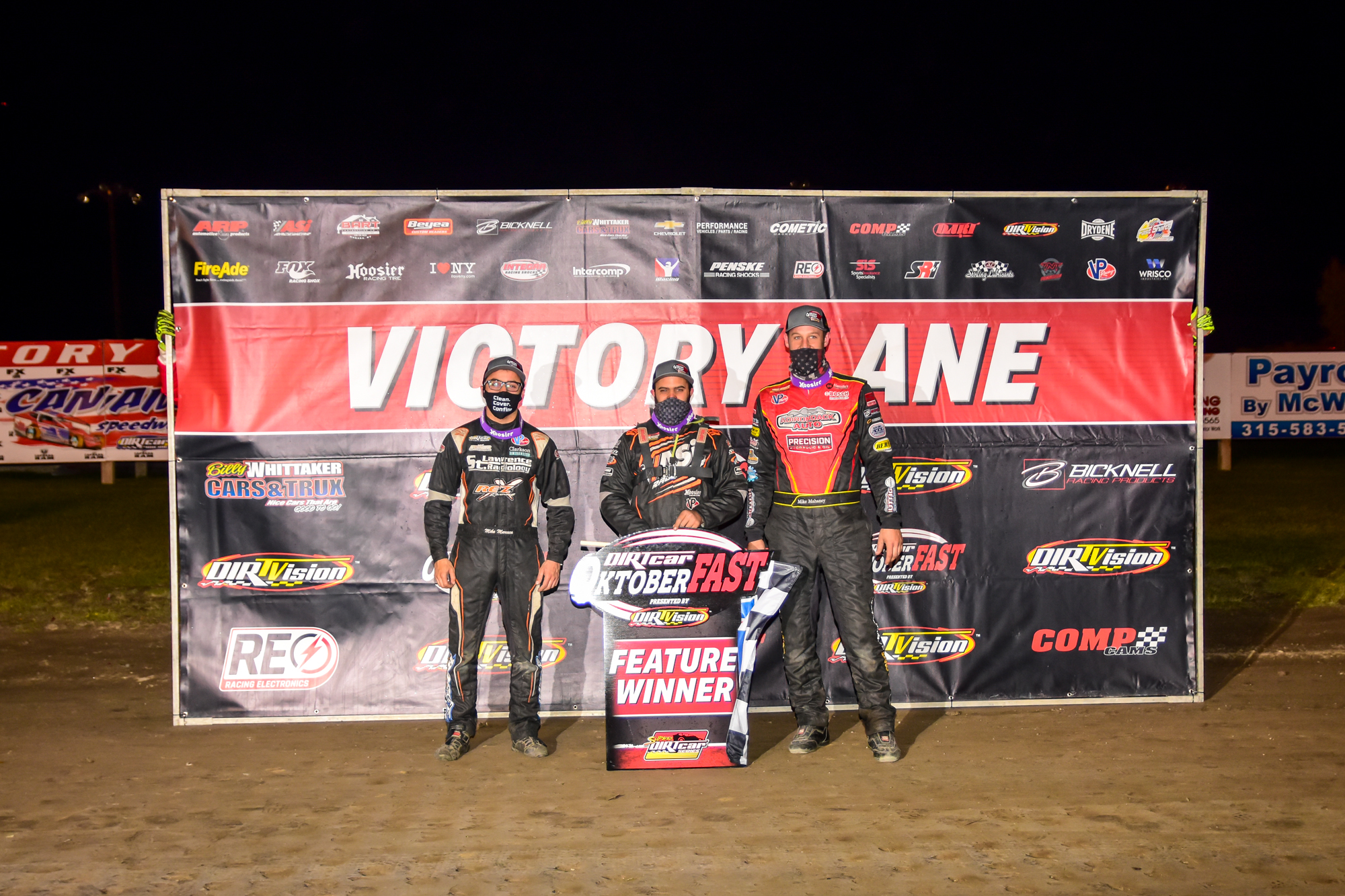 LAFARGVILLE, NY – October 9, 2020 – Anthony Perrego, from Montgomery, NY, wheeled a perfect 60-lap race to win his second career Billy Whittaker Cars Super DIRTcar Series Feature and second win of OktoberFAST. Hot on his heels, the No. 7mm of Michael Maresca crossed the finish line in second after a late-race charge fell short. And once again at OktoberFAST, Mike Mahaney, from King Ferry, NY, parked his No. 35 on the podium for the third time in three races.

Anthony Perrego pinned it right out of the gate. The No. 44 handled perfectly for the newly minted Series winner. At the drop of the green Perrego roared into Can-Am Speedway’s first turn with the holeshot on the field. From there it didn’t matter what happened behind him because all he saw was lapped traffic and Head Starter Dave Farney’s flags.

Except for one resilient Michael Maresca from Pierrepont, NY. Perrego had to be perfect because a black and orange door made an appearance on his left side more than once.

Maresca gave Perrego a good look at his St. Lawrence Radiology Big Block Modified entering turn one on a restart with nine laps to go. But Perrego slammed the door, Maresca yielded the low line, and the No. 44 parked in Victory Lane for the second time in four days.

Perrego was proud of his team and thrilled to double up on OktoberFAST wins and his first two Super DIRTcar Series wins.

“To not have a Series win coming into this week and get two is pretty cool,” said Perrego. “I wish we could do them all but who knows maybes next year we’ll do the whole Super DIRTcar Series.”

Michael Maresca took his chance on a restart with nine laps to go. He dove deep into turn one, trying to secure the low line through the corner.

“Anthony has raced me clean a lot so I lifted. I drove it in pretty deep and had to hit the brakes,” Maresca said of his final shot at the lead. Further challenges were hampered because Maresca clipped an implement tire and knocked the toe out in the final laps.

Despite that, he was relieved to have a strong finish after struggling for the last two nights.

“Pretty happy to get to second after starting sixth. We had a really terrible first two nights. We haven’t run the Big Block much and we were pretty far off,” said Maresca.

Mike Mahaney has had an outstanding OktoberFAST nabbing podiums in every Super DIRTcar Series race so far.

“It’s a great week for us. I can’t thank the team enough. Our car has been solid and very consistent,” said Mahaney. “I just keep thinking that if we keep running up front that one of these days we’ll win one,” he joked.

Queensbury, NY’s Demetrios Drellos grossed nine positions up through the field for the St. Lawrence Radiology Hard Charger Bonus worth $250.

Join us again tomorrow night on DIRTVision from the Canandaigua, NY half-mile Land of Legends Raceway where the Billy Whittaker Cars and Trucks Super DIRTcar Series and Racing Electronics DIRTcar Sportsman Modified Series pick up the action for night five of DIRTcar OktoberFAST presented by DIRTVision.