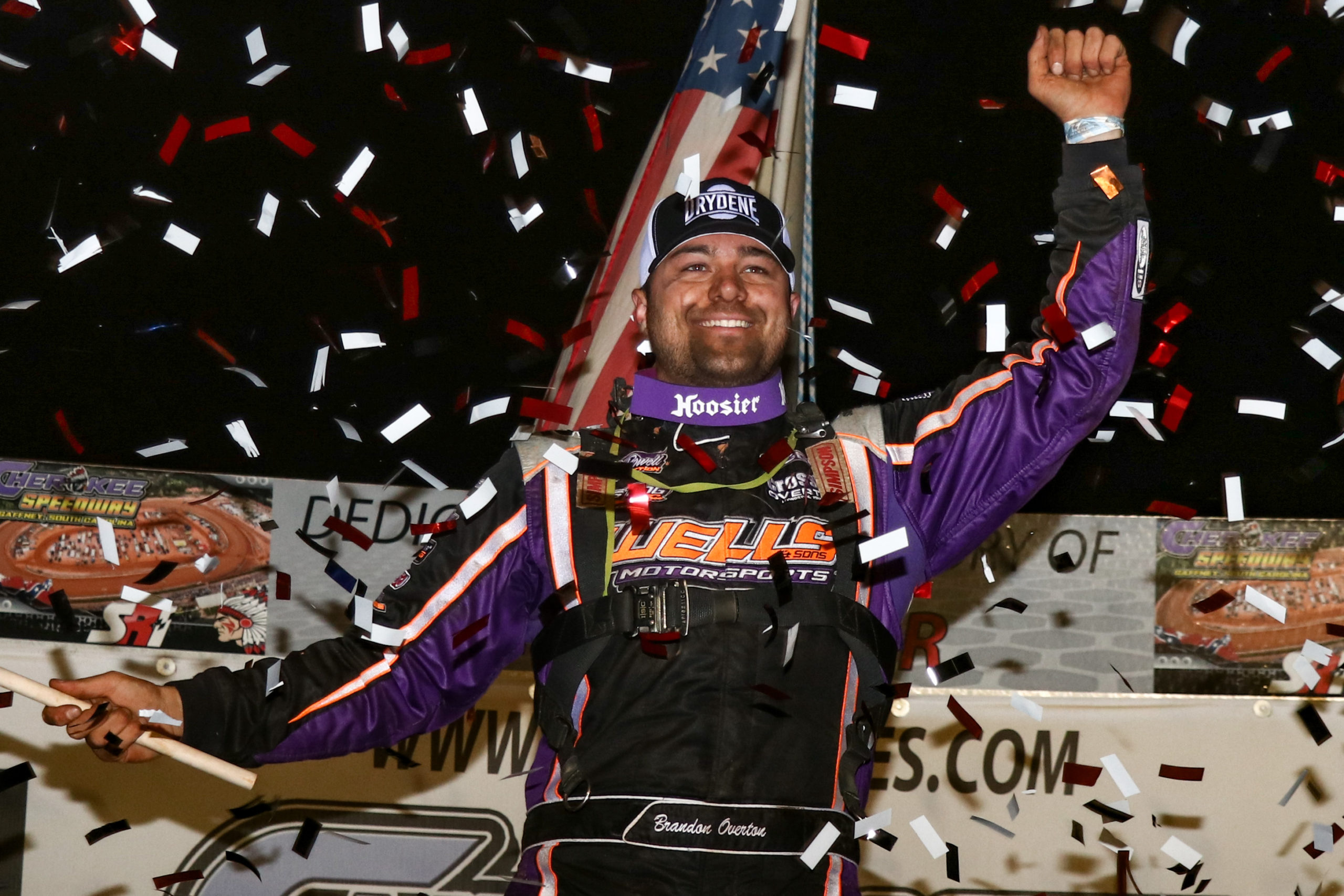 GAFFNEY, SC – One break in the action was all it took for Brandon Overton to execute the plan that would, ultimately, win him $10,000 and his first career Drydene Xtreme DIRTcar Series Feature.

A caution flag was displayed with 40 laps remaining in the 30th annual Blue Gray 100 at Cherokee Speedway Sunday afternoon, opening the door for Overton to take his Wells Motorsports #76 pit-side for a new set of Hoosier Racing Tires while running third. While several other drivers were beginning to experience heavy tire wear and eventually blowing them out, Overton was patient with his fresh rubber and bided his time, just waiting for the front of the field to come back to him.

It didn’t take long for the Evans, GA-driver to see his plan come to fruition. In just 10 laps, he had made it back up inside the top-10. Two laps later, he was sitting fourth.

With only 15 laps remaining, Overton was running second and in hot pursuit of the leader and defending race winner, Chris Madden. By this time, Madden was one of only two cars in the field that had not yet been to pit road for service, and the big question loomed – how much further could he go on a single set?

Madden looked good after a Lap 83 restart, but heading down the backstretch on Lap 93, his chances for a seventh Blue Gray win were dashed, falling victim to a very ill-timed flat tire. Overton then assumed the lead and drove it all the way back home unchallenged for his second career Blue Gray 100 victory.

“I probably pitted a little too early because there was still a lot of traffic in front of us,” Overton said. “It could have gone either way; I could have pitted, and they wadded ‘em up on a restart and you’re done for the night. So, it was a risky gamble, but it paid off.”

But just exactly how was Overton’s master plan for the long-distance race set up? A good dose of preparation paired with a big helping of execution.

“We made that decision, probably, Wednesday,” Overton candidly replied about his decision to pit earlier than others for tires. “I said if we’re not out front leading, car most definitely comfortable and I know I’m gonna make it, I’m just gonna pit.

“I got to second just riding around, and then I just still kept telling myself, ‘Just chill out. You’re gonna pit, you’re gonna pit.’”

Madden’s flat right-rear tire may have also had a catalyst from behind.

“I was pushing [Madden],” Overton said. “His crew guy was back there in Turn 3, and I was telling myself to just stay as close to him [as I could have] to make him go faster and faster. I wasn’t gonna push the issue, but once he started backing up, I had enough tire that I could have went around him on the top and come back down.”

Now with 26 Feature victories total on the board this year, this magical stretch Overton’s been on has been nothing short of astonishing. And, of course, he’s got the hard-working attitude and humble demeanor to match.

“These last couple races, I told [my crew] if we win, we win, if we don’t, we’ve had a hell of a year,” Overton said. “This is the best year I’ve ever had racing. I told Big Dave when I called him up about driving this stuff, I said ‘man, I just want to have fun again.’ And that’s what I’m doing, I’m having fun.”

Benji Hicks crossed the stripe in second for his best career finish in the event. Hicks, of Mt. Airy, NC, originally started 19th and mostly floated around those mid-pack positions until tire wear started to take its toll around Lap 60. Hicks also came in around the same time Overton did for tire changes, which helped him back to the front in the closing stages.

At one point, Hicks had gotten a good run on the top side on a restart and drove around Madden for second. He was unable to hold Madden off near the end, but claimed the runner-up spot upon Madden’s Lap 92 blowout.

“I’ve said it two or three times already, but it’s been a crappy year, and I’m so excited to get a podium finish like this,” Hicks said. “Now, we’re going to go and run the new two Xtreme races and see how we do.”

Kyle Strickler came home in the third spot after also having a very up-and-down race. The Highside Tickler held it strong up front all race and eventually came to challenge the leaders with about 30-to-go, until blowing a right-front tire set him back a bit.

“It helped me, actually, because that put me ahead of a bunch of guys that ended up getting flats as well, and that just put us ahead of the guys with new tires.”

A great podium finish to start off the 2020-21 Xtreme season and his new venture with PCC Motorsports, of Indiana, will find the Mooresville, NC-pilot in the pit area at the next Xtreme Series race – Volunteer Speedway in Bulls Gap, TN, on Dec. 5. for the second running of the Grinch 40.

“I really enjoy that racetrack, it’s probably one of my favorite places to go to,” Strickler said. “We ran second with the [tour] there last year, so I’m definitely going to go to that. I think we’re going to try and make as many races as we possibly can. It’s a nice little Series for us to kinda break-in the new team.” 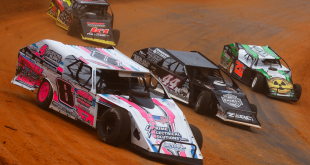 WHAT TO WATCH FOR: Past Experience, Revived Equipment Set to Carry UMP Modified Stars in Bristol Bash