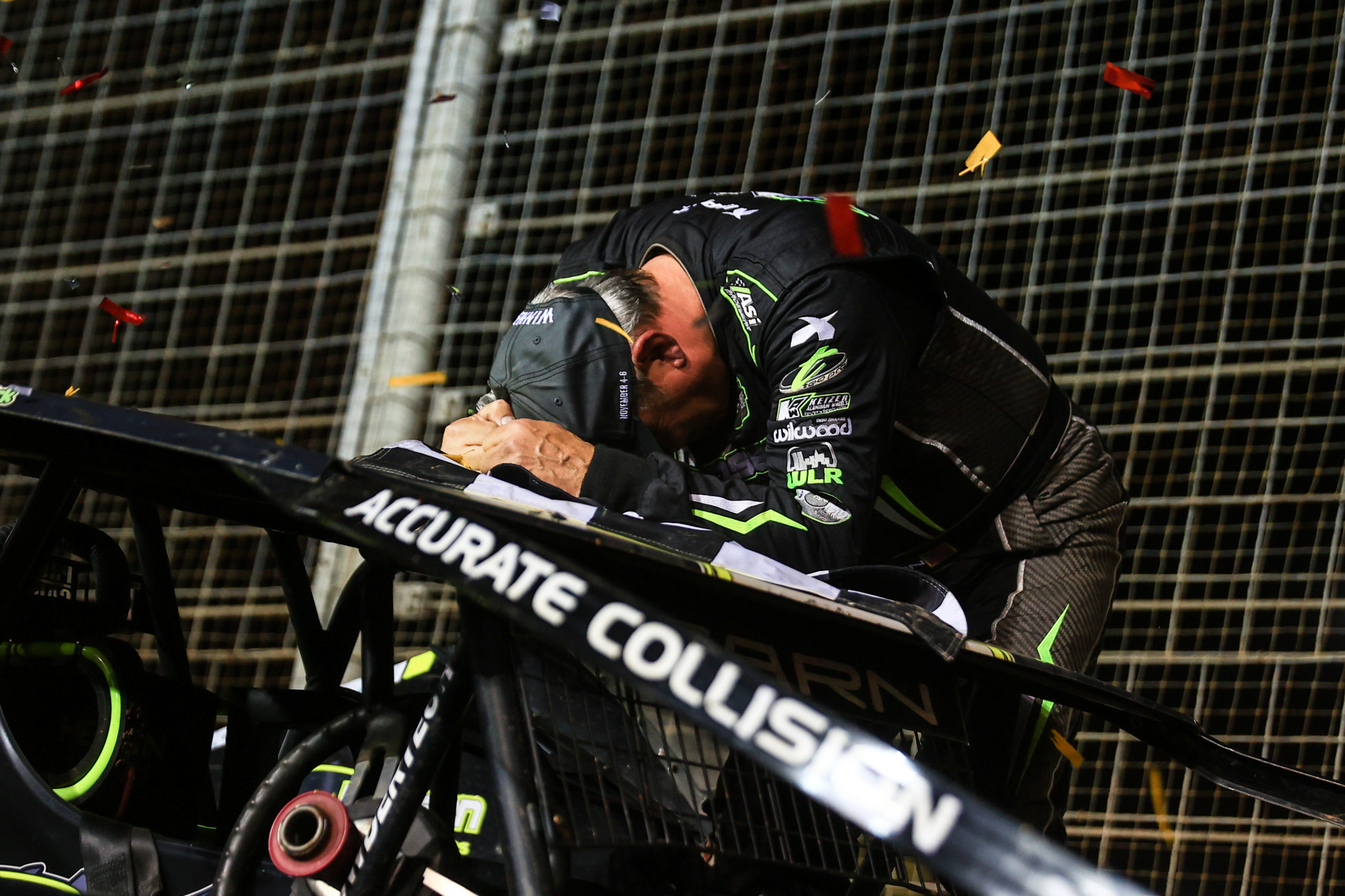 CONCORD, NC – ​​Brett Hearn looked to the sea of phone lights and emphatic fans in near shock. His head fell to the roof of his #20 Big Block Modified and stayed there for a couple of seconds, fists clinched. The Hall of Famer has more than 100 Super DIRTcar Series win, more than 400 DIRTcar sanctioned wins and more than 900 dirt Modified wins, yet on Saturday night at The Dirt Track at Charlotte for the NGK NTK World Finals, he looked like he’d just won his first.

The legend of the sport, who has been racing a limited schedule for the last few years – led from green to checkered to pick up his first Super DIRTcar Series victory since 2018 – also his 450th DIRTcar win and 920th dirt Modified win.

“I never really envisioned being back in Victory Lane because I was so far out of the seat,” Hearn said. “If I can’t see myself in Victory Lane, I’ll never get there. I came into tonight visualizing myself on this stage and that’s what happened.”

The moment was also surrounded by multiple page-turning storylines. Matt Sheppard claimed his eighth Series title the same night, surpassing Hearn for the most championships all-time and finished second behind his hero at the end of the 30-lap Feature.

“He’s the greatest of all time,” Sheppard said. “He came down to whoop on us at Charlotte. He could pick no better time to retire!”

After drawing the SRI Performance Pole Award for the second time in two nights, totaling $1,000 in winnings, Hearn kept his black and yellow #20 Madsen Motorsports Big Block wide enough to hold off charges from Peter Britten, Sheppard and Rocky Warner.

Hearn, from Sussex, NJ, started from the pole position in both Friday and Saturday night Features but round two had the results he wanted.

“We just got caught with the wrong tires last night,” Hearn said. “We didn’t anticipate the amount of tire-eat we had and flat out made a bad choice. The car off the trailer was great. The key here is to come out fast and Time Trial well.

Hearn timed quickest his qualifying group running a 17.210 second lap. He also holds the Big Block lap record at The Dirt Track at Charlotte and is now in sole possession of the all-time wins record at the Concord, NC track with five.

“When you do that [Time Trial well], it makes everything flow better,” Hearn said. “The fact that we drew the pole and had two chances from the point, it would have been a disappointment not to come out with a win. We won our Heat Race tonight and we knew if we were able to keep the tires under us in the Feature we’d be good.”

Despite starting from the pole, the race was far from a slam dunk win. Rocky Warner, from Gloversville, NY, and Peter Britten, the Australian in the #21a, showed their doors to the #20 on two occasions, necessitating Hearn to engage the afterburners.

Warner was all over the rear bumper of Hearn in the early stages but the #98 suffered a flat tire which forced him into the Low-E Insulation Work Area. When the 30-car field went back to green, Hearn found his rhythm.

“I ran the spot on the track where I felt the best,” Hearn said. “If I saw someone on my right or my left I would adjust my line a little bit. I just had a line that I felt really good with. When I got to lapped cars I could tell that when I got off my line a little bit I wasn’t as good. I was in total rhythm. I finessed the spots on the track where I knew I didn’t have the best traction and nailed the spots where I knew I did.”

On lap 14, calamity struck as Larry Wight, Tim Sears Jr., Duane Howard, and Zach Payne got themselves into a high-speed parking lot at the top between Turn 3 and Turn 4.

Peter Britten saw his chance on the restart and drove deep into Turn 1 drawing alongside Hearn for the lead. Hearn held “Batman” off for the $10,000 NGK NTK World of Outlaws World Finals win.

Hearn’s win put an exciting cap to the end of the 2021 season and produced the storyline of youth and legend can get it done in the Super DIRTcar Series with 17-year-old Alex “Kid Rocket” Yankowski winning Friday night’s Feature at the Charlotte dirt track before veteran Brett “The Jet” Hearn parked it on Saturday.

“What a storyline,” Hearn said with a grin. “How old is he? [Referring to Yankowski]. Seventeen and I am a 63-year old. He’s just gotta keep doing what he’s doing. He’s awesome. I watched the highlights of his race last night and was just spot on. It’s not an easy game. Guys are going to take their turns. It’s just cool to see two different guys in Victory Lane.”

Matt Sheppard was catching Hearn after he cleared Britten for second place. The conclusion of the 30-lap Feature made his presumptive championship official. Matt Sheppard won his eighth Super DIRTcar Series championship.

Sheppard, from Waterloo, NY, finished a disappointing 15th on Friday night but he planted the #9S firmly on the podium on Saturday.

“Track position was key but we had a really good race car,” Sheppard said. “We took advantage of the restarts to move around. We needed a better start and we might have had a different result. It took me a long time to get around Peter [Britten]. That one caution really hurt me. I had just gotten around him for second and the caution came out. I went back to third and then it took forever to get back by him. Once I got clear I could run Brett [Hearn] down but just ran out time but it was a good night for us.”

Britten, from Brisbane, Queensland, Australia, spent most of the race looking at Hearn’s “Follow me to Orange County Fair Speedway” decal on the rear of his Big Block.

“I was trying to keep my adrenaline down,” Britten said. “It was a tire conservation race and the last thing you need to be is all crazy up on the wheel. I actually could have pushed harder. I went with a softer option. When I was out there, I was thinking it may have been the wrong choice based on feeling how much latch the track had. I really babied it. As it turns out I had more than that I could have pushed with. It’s hard to know. I was just hoping not to blow a tire and not get crushed from behind. I don’t think the tire choice hurt me as far as pace goes. If I knew I had that much tread left, I could have pushed harder.”

It was a 30-lap battle that went to the wire for the two-time Super DIRTcar Series Feature winner.

“Hearn was tough,” Britten said. “He would have been hard to pass even if I had pushed. I gave him one good crack on that last restart and got inside him but even though I was inside him I would have had to use him up and I don’t drive like that.”

Unfortunately for the #21a, Sheppard took advantage of Britten’s tightening race car in the closing laps.

“I got little tight on the longer runs,” Britten noted. “I think my right front was giving up a little bit. Because I was worried about the car, I didn’t want to stress the car too much to keep it turned. I let it go into a push a little too much and Sheppard just got under me.”

Max McLaughlin, from Mooresville, NC, passed 23 cars to roll the bottom and pass two to three cars at once. “Mad Max” finished seventh after starting 30th.

When Hearn left the Victory Lane stage, the sea of phone lights and emphatic fans were still there. And so was his glee that made him look like a first time winner all over again.

NEXT IN 2022: The DIRTcar Nationals at Volusia Speedway Park are just three months away on February 7-19. Race fans can get their Big Block Modified fix February 14-19. Buy your tickets HERE. If you can’t make it to the biggest dirt racing event in Florida, watch all the action live on DIRTVision presented by Drydene.