Frenchman Roy, driving the Gamache Trucking No. 90, started fifth in the 26-car field and used lapped traffic to escape from McCreadie and Todd Stone. After two early cautions, the race ran green for 63 laps before a final caution on lap 67.

“I am so happy to win against racers like Tim McCreadie, Tim Fuller and Todd Stone,” Roy said. “The car was very good all night and never changed which was very good for me.”

Stone finished third at McCreadie’s bumper five car-lengths behind Roy. “He (Roy) was the best in the lapped traffic all night and deserved the win,” McCreadie said.

Airborne points leader Mike Bruno, who won this event last year, demolished his car in a qualifying heat and did not make the Shootout field.

Roy had a full straightaway lead at the halfway mark, but was slowed by heavy traffic and soon had McCreadie, Stone and Gonyo close at hand. Stone eased under McCreadie for second for one lap before surrendering the spot back.

In companion events, Randy Martin of Plattsburgh was a dominant winner in the 25-lap Monster Energy Bomber feature while Butch Lamere of Plattsburgh won the NAPA Auto Parts Warrior main.

Airborne returns to its weekly racing schedule this Saturday at 6 p.m. 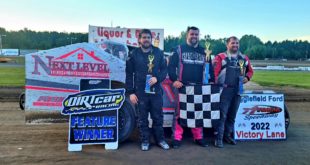