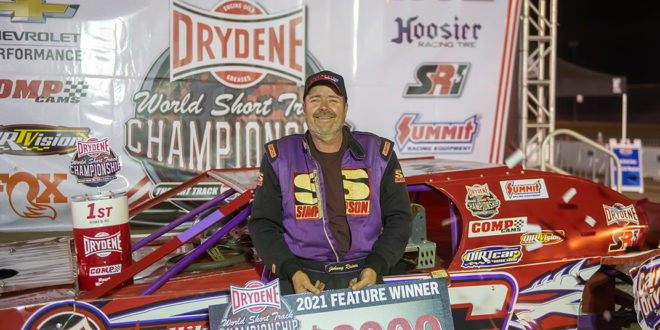 Keaton was found to have an exhaust infraction, which took the win away from him and gave it to Johnny Raines, who had originally finished second

Carolina weather in the fall is unpredictable; it can be hot one day and chilly the next. While the air this weekend for the 6th Annual Drydene World Short Track Challenge was chilly, the action on the track for the COMP Cams Monster Mini division was nothing but heat.

After an exciting night of Heat Racing on Friday and three action-packed Last Chance Showdowns, Johnny Raines led the field under the waving green flag for Saturday’s feature event.

The hungry pack of drivers quickly found themselves in a traffic jam as a melee broke out when the #12B of Junior Baker spun around after contact with Greg Brew. The incident caught another half dozen drivers in the mess.

The subsequent restart was a near repeat as the #12B of Junior Brew went around after contact with another car, again collecting several cars in the process.

As they say, the third time’s the charm.

When the green flag once again dropped, it was Johnny Raines with a commanding lead as the cars raced out of Turn 3 and down the backstretch. This time everyone cooperated and the race was underway. Just as the #212 of Greg Brew was catching the leader another caution came out for a slow car.

The green flag came back out on Lap 5 and was quickly followed with a yellow on Lap 6 as the #44 car of Marcus Hughes went around in Turn 4.

With 20 laps to go, the field once again took the green flag. Raines maintained the lead with heavy pressure from the #19 car of Travis Mosley, who had started fifth. Behind them, the field raced three-wide back through 12th, with cars taking whichever racing line they desired on the stellar racing surface.

On Lap 9, Harley Holden, who had started sixth in the #H3 car, made an aggressive move to pass Mosley, and took the second position. Two laps later, Holden got to the back bumper of Raines, and following a drag race down the front stretch, took the lead going into Turn 1. 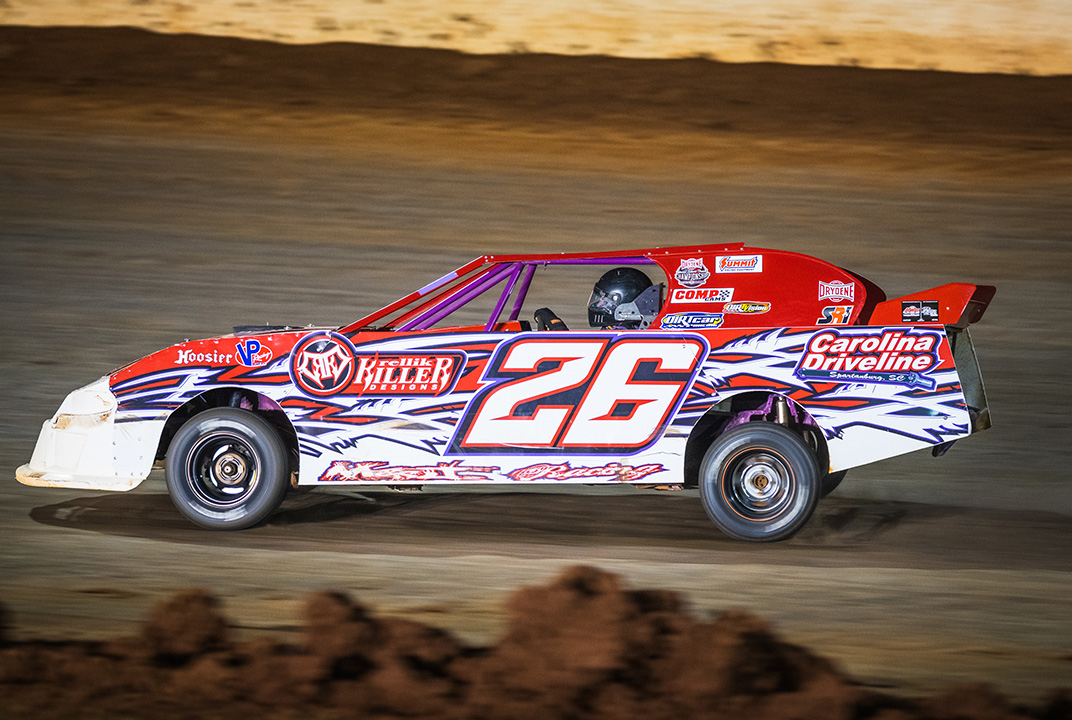 The caution would once again fly with 10 to go.

On the ensuing restart, the top cars entered Turn 3 while catching a lapped car, which forced the leaders to choose the high or low line. By the time they exited the turn, it was the #1G of Grayson Keaton leading the way.

From there Keaton wouldn’t look back, gaining a two-second lead and driving under the checkered flag first.

However, during post-race technical inspection, the #1G was found to have an exhaust infraction and was disqualified. This handed the win to Johnny Raines and moved Harley Holden and Travis Mosley into second and third respectively.

After receiving word that he was now the winner, Raines said, “A win is a win, but when you come to Charlotte you need to be right. This is the most prestigious race of the year, and you know the rules. So I’m going to take it how I can get it, because this [car] was right .”

“It was a good battle up there, we were beating and banging up there, you know?” he said. “It’s slick out there for us, and we don’t weigh enough to put much to the ground, so it’s a finesse race. Last night was hammer down. I could flat-foot it around the race track. Tonight I had to burp it and then be really easy on the gas and keep the car real straight off the corner to keep any speed.”

Second place finisher Harley Holden was also pleased with his race saying, “It was an absolutely great car tonight. We got shuffled back early in the race to fifth, and then I came moving up. I got a really good start on one restart and here we come. I made it all the way to the lead. Then the caution came out and unfortunately shuffled me back one spot. I fell back to third right from there, and we finished at third. It was a good strong run, and fortunately, now we’re up to second due to a technical infraction. It was a good night.”