A fixture on the DIRT of Central New York circuit in the 1970s and ‘80s strapped inside his familiar powder blue no. 91 Modifieds, popular Penn Yan, New York pilot Mattsion had been treated for cancer for more than a year and he took a turn for the worse in recent weeks.

“He was such a nice guy, always so friendly saying hello whenever we crossed paths,” remarked Gary Spaid, long-time scorer and chief handicapper at Canandaigua (NY) Speedway, where Mattison earned his first Big-Block feature win on July 26, 1975, capturing a second at the renamed Dundee Raceway on September 2, 1988. At Canandaigua he beat out Hall of Famer Will Cagle and Darrell Welty to forever etch his name in the ‘Land of Legends’ record book, chasing Dave Kniesel, John McArdell and Jimmy Winks across the line to finish fourth at Rolling Wheels Raceway Park the night before. “I’ll certainly miss seeing him walking through the pits and stopping by to talk to everyone.”

Added life-long Canandaigua fan and active videographer Bob Miller, “Doug had a unique ritual that I noticed as a young teenager that I thought was real cool. When he came out of the pits for warm-ups for the first time each night, he’d pull up tight against the fence and drive real slow while he waved to the young kids in the stands and along the fence. He said that one of the things that he remembered most when he himself was young was when the drivers waved to the kids. He said it made him feel like he was their friend. It certainly meant the world to my own kids and they were his fans for life.”

Calling hours have been set for Wednesday April 22 from 4-6 p.m. at the Weldon Funeral Home, 102 East Main Street in Penn Yan. Services will also be held Wednesday from 6-7 p.m., followed immediately by a reception at the nearby Elks Lodge, 133 Main Street in downtown Penn Yan. 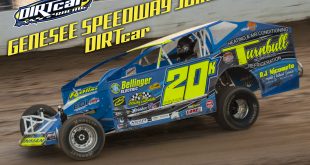