Mike Watts, 58, track photographer at Mohawk International Raceway (MIR) in Akwesasne, N.Y. and Airborne Park Speedway in Plattsburgh, N.Y., passed away on Sunday morning, July 25, after suffering a heart attack earlier in the week. The staff, racing teams, fans and sponsors of MIR would like to express their deepest sympathies and condolences to his wife Jane and sons Mike Jr. and Andy, their family and their many, many friends.

A celebration of Mike’s life will be held at Airborne Speedway following burial services. Anyone wishing to make a donation of food may do so by bringing a dish to Airborne Speedway on Wednesday morning. The food can be dropped off at the main concession stand to Brenda or Allan Fuller.

Watts had been involved in racing his entire life, first as a fan at Airborne Park Speedway as a child and then picking up the camera and taking photos of the racing action at the age of sixteen in 1967. He covered racing action at Airborne on a weekly basis from the 1960s through the late 1980s and returned again to Airborne on a weekly basis in 2005 when his close friend Mike Perrotte became promoter and brought DIRTcar 358-Modifieds back to the track on a weekly basis. He was thrilled to “come home” to the track he grew up at and see his friends in action on the speedway.

Mike joined Mohawk Int’l Raceway in its second season, in the late 1980s, when the track was named Frogtown Int’l Speedway and ran on Friday nights, drawing one of the toughest weekly 358-Modified fields in the Northeast. Mike and his family covered the racing action at MIR every week for over twenty years and Mike and Jane’s photo stand was the first stop on race night for so many fans, drivers and officials, not just to get photos and racing newspapers and other souvenirs, but to hear stories, tell jokes and renew friendships.

Mike Watts and Mike Perrotte started the Champlain Valley Motorsports Show in the late 1990s and in the past decade, the show has become a huge success. The annual show has become the kick-off of the racing season for most Champlain Valley racing teams and fans, and it is a time when everyone can get together after a long, cold winter to look forward to the excitement ahead in the summer months.

Mike and Jane Watts have been so committed to racing and in many respects, their family life revolved around the sport. Mike proposed to Jane during a racing show at Airborne Park Speedway. Their sons Mike Jr. and Andy grew up at the races and are still deeply involved in the sport.

Mike was known throughout the Northeast as he traveled to many other speedways to cover the action, in addition to covering the weekly action at Mohawk and Airborne. His photos were prominently featured in racing newspapers such as Gater Racing News and Area Auto Racing News, in local news coverage, and on many racing websites.

Mike played a special role in racing: His photos document the history of five decades of racing in the North Country. When our memories fade and the old newspaper clippings are brittle, we will always have Mike’s amazing photographs to stir our memories and tell the story of the sport we love so much. For that and so much more, we are thankful.

Mike Watts made as many friends as he took photos…and he took a lot of photos over the years. Mike gave so much to the racing community — he gave us great photos, yes, but he also gave us great memories, great stories and jokes, great times and conversations. He was a great friend to all of us and we will miss him deeply.

Our thoughts and our prayers are with Jane, Mike Jr. and Andy in this very difficult time.

Thank you, Mike, for being our friend. You will be in our hearts forever. 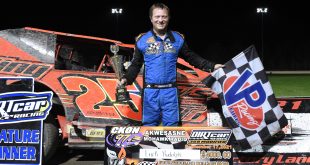