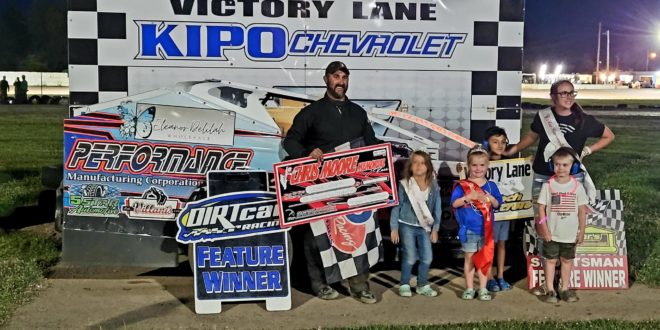 RANSOMVILLE, NY – Derek Wagner took advantage of a redraw that put him on the pole for the 30 lap, Chris Moore Memorial DIRTcar Sportsman Western Region Series event at his home track, the Ransomville Speedway. Leading all laps, his well sponsored #61 flashed under Dakota Miller’s double checker to take the $1,250 winner’s check.

The first annual Chris Moore Memorial was to honor a life-long resident of Ransomville and an all-around fan of the historic track celebrating its 64th season.  Having a race in Moore’s honor made the victory for Wagner a little more special.

“I didn’t really meet Chris but knew about him.  To see all the people in victory lane greeting me you can tell he had so many friends and family,” said the driver who currently sits second in Ransomville points, “So to win the first race in his honor ranks right up there for me.”

As mentioned earlier, Wagner drew the pole, “I have to thank Brooke Moden for that, I never draw for myself!” Wagner exclaimed. With overcast skies seeing the Ransomville clay having some extra bite, Wagner took to the outside for the original start.

“I felt comfortable in my heat and the outside was the fast lane, so I went there for the start,” he continued, “I really was just going to stay there unless I saw someone under me.”

In all 30 laps, that “someone” really only happened once with veteran Scott Kerwin showed his nose on a restart.  “I thought he got a jump on me and I was seeing if they were going to call it back.  But on the next yellow they came over the one-way and said they were but I pulled away going down the back stretch so they kept racing.” Wagner noted, “That was all I needed to hear and lapped cars really wasn’t much of an issue either so the race went smooth.”

Wagner was also quick to thank Randy Williamson for helping with what he would call “tweaks here and there”.  At the finish it was Wagner ahead of Cameron Tuttle who came from his sixth place starting position to second at the finish over Kerwin, Central NY invader Mike Fowler and Canadian Cody McPherson who won the last DIRTcar Sportsman event held at Ransomville.

Two Free Hoosier Tires were awarded for the event with McPherson and Jessica Kriegisch being the recipients. 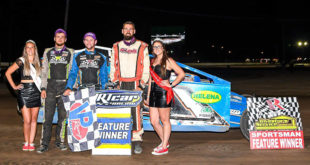