The OneDirt World Short Track Championship had 24 cars run in the 360 Sprint division at The Dirt Track at Charlotte Motor Speedway. 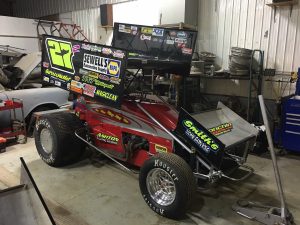 Name: Stan Zanchin
Class: 360 Sprints
Hometown: Fort Erie, ON
Age: 54
Home Track: Travels Allover
Stan Zanchin travels down from Ontario every year to go to the World of Outlaws World Finals at the Dirt Track at Charlotte, but this year he won’t just be a spectator. Making his annual trip one week early, Zanchin will participate in the 360 Sprint series at the ONEDIRT World Short Track Championships.
Starting his racing career in 1980 and running every type of stock car you can think of, Zanchin decided to switch to sprint cars 12 years ago.
“I started racing when I was 17 or 18 years old. I didn’t have a rich dad that could buy me a race car so I had to wait until I was old enough to have a job so I could save up enough money to buy my own. Now I’m looking into late models. I can’t keep running sprint cars, my wife is going to kill me,” said Zanchin laughing. “No seriously, she will.”
With his car parked in the trailer a few days before he heads to Charlotte, Zanchin is patiently waiting to hit the road and hit the dirt track. His main goal is to qualify for the feature.
“It will be tough but I know that it will be tough on everybody,” said Zanchin. “For most people this is going to be a foreign track.”
Hankering for some extra luck on the track, Zanchin always puts his wristband on his left arm before the race.
“We do general maintenance to make sure everything is right so we don’t have any failures… but if I put [my wristband] on my right arm, it turns into a bad race” said Zanchin. 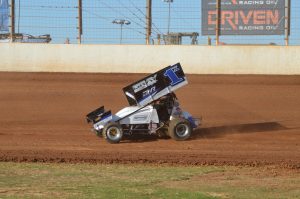 Even though Scott Hunter lives near Charlotte Motor Speedway this will be his first time to drive on the track. He started driving go-karts in 2000 and has been hooked in the racing industry ever since.

“It’s the first time for me out here and the track was holding up as of now and we’re pretty happy with the conditions out there so we’ll see what we got,” said Hunter. 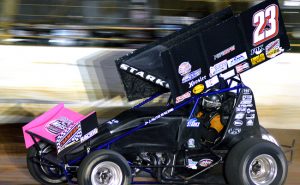 Trey Starks is embarking on a double-header at The Dirt Track at Charlotte Motor Speedway. He will be running Oct. 20-22 at the OneDirt World Short Track Championship as well as, Oct. 27-29 in the Bad Boy Off Road World of Outlaws World Finals.

“Hopefully these are laps in the bank for next week,” said Starks. “This was not only a race we wanted to come win but it was a pretty big test session for next week and we will see pretty similar conditions with a decent amount of cars next weekend and so we got the notebook stacked up and even though [I’m in a] 360, we learned a few things that we can probably use on the 410.”