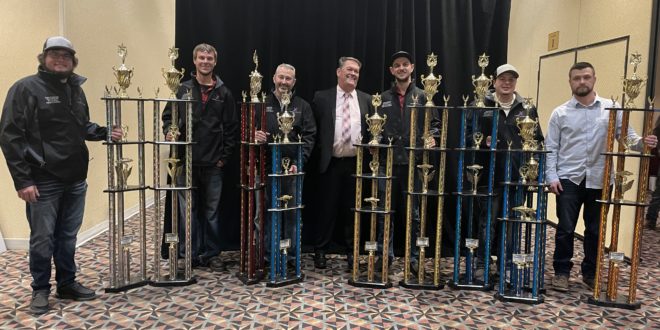 The year-end championship banquet for the 2021 DIRTcar Racing season is in the books, and the stars came out to help celebrate.

An evening of good friends, family, food and fun culminated with the recognition of each of the national champions and some very special award winners. Emcee Rick Eshelman led in procession of the ceremony, first calling regional and national points fund check winners to the stage before diving into the champions and special awards.

Each year, two of the most prestigious awards are presented to both a DIRTcar-sanctioned track and promoter that demonstrate outstanding abilities to provide top-quality racing entertainment, elevate competitor participation and host special events that bring out the best in fan attendance.

In a year that needed the support of DIRTcar tracks, their staff and officials more than ever, two of DIRTcar’s most recognizable entities were successful in each of those areas last season and came to the stage to have their achievements honored.

Adam Mackey came to the stage and accepted the award on Track Enterprises’ behalf and was thrilled to receive the news of the company’s achievement.

“Hosting in upwards of 60 DIRTcar events, it’s a privilege to be able to do that,” Mackey said. “Joining the likes of each of the previous Promoter of the Year Award winners means a lot with all of the events that we do and all the successes that we’ve had.”

Next, the staff of Farmer City Raceway was called to the stage to receive their trophy as 2021 DIRTcar Track of the Year. Noted for the exciting, multi-groove, multi-division racing in their Friday Night Lights weekly program, the quarter-mile bullring hosted several special DIRTcar events last season and provided fans with some memorable finishes.

Track announcer Tyson Graves spoke about what it meant to the FCR management and staff to have the success that they did in 2021, and shared in the surprise with the rest of the team when they were called onstage.

The entire DIRTcar Racing family would like to thank each of the drivers, tracks, promoters, sponsors, officials and crews that contributed to making the 2021 season another great success. Here’s to an even greater 2022!