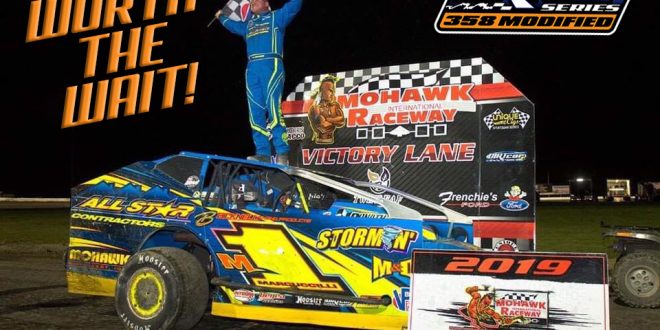 Coming in third in the Series points, Marcuccilli was pretty happy in the winner’s circle: ‘’The track rubbered up and kept hitting my marks and very happy with the win here tonight especially with about nothing left on my right rear tire”.

By winning this event, Marcuccilli will gain some valuable ground on the top 2 in the Series: ‘’Getting these points will be important as we are heading into a busy time in the Series’’ finished Marcuccilli.

Dave Marcuccilli and Billy Dunn were on the front row of the thirty-car field as Marcuccilli took the lead over Dunn with Ryan Arbuthnot in third. Marcuccilli pulled away from the field as the inside lane was the way to in the early portion of the feature. Yellow lights came out on lap 7 for Madison Mulder hitting an inside tire.

The green light came back on lap thirteen with Marcuccilli keeping the lead with changes in the front 3 with Michael Maresca and Tim Fuller in the top 5 at that point. The leaders caught slower cars by lap twenty-four as Tyler Meeks and Preston Forbes came together and caution was out on the following lap.

The next restart was an eventful one as a four-car tangle occurred in turn 2 on lap thirty-one in which included DIRTcar 358-Series contender Mike Mahaney, the driver of the 35-machine sustained heavy damage and needed assistance to head to the pits.

Marcuccilli led the way at halfway point with Dunn, Arbuthnot, Maresca and Fuller were the top 5, Marcuccilli pulled away from the back with thirty laps to go.  The leaders were back into lap traffic by lap fifty as these conditions brought the field together with everyone running the bottom. Dany Gagne slowed in turn 4 and yellow lights appeared on lap fifty-five.

Marcuccilli wasted no time as he opened a 5-car gap over Dunn with Arbuthnot still in third.  Slower cars brought the field together with less than 10 laps to go in the finale. With 71 laps completed the yellow was out for Joey Ladouceur.

Marcuccilli made no mistake and went on to win the event over Dunn and Arbuthnot.

The DIRTcar 358-Modified Series takes a small break as the drivers will get ready for the NAPA Auto Parts Super DIRT Week XLVIII with a very busy week with stops at Utica-Rome on Tuesday, October 8, at Weedsport the following night, Brewerton on Thursday and then the big one at Oswego on Saturday afternoon.