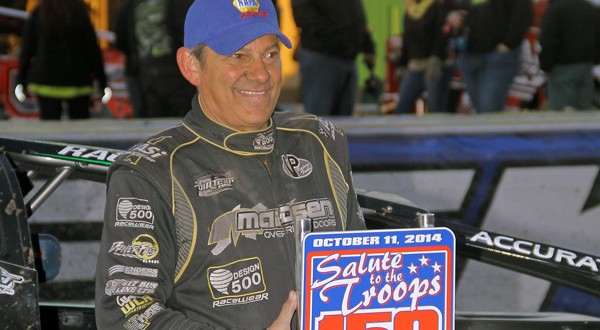 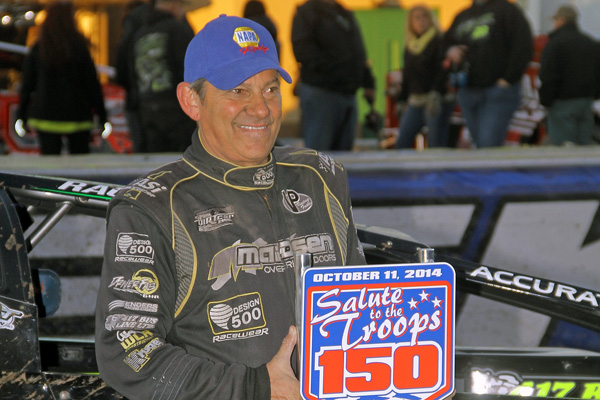 SYRACUSE, N.Y. (Oct. 11, 2014) — Brett Hearn did it again in Saturday’s ‘Salute to the Troops’ 358-Modified Championship 150 at the New York State Fairgrounds — and this time with a little dramatic flair.

Seizing the moment when leader Billy Decker ran out of fuel and slowed on lap 146, Hearn split the gap between Decker and second-place Tim McCreadie to vault into the top spot and drove away over the remaining distance to capture the NAPA Auto Parts Super DIRT Week small-block spectacular for the second consecutive year.

Decker, of course, came painstakingly close to capturing the race for the seventh time. He emerged as the leader on lap 70 when his Gypsum Racing teammate, Larry Wight of Phoenix, N.Y., pitted under caution and kept his challengers at arm’s length after that — until an empty fuel tank caused the 49-year-old star to fall off the pace rounding turns three and four with just four laps remaining.

“It was just my day,” Hearn said after executing a couple celebratory donuts in victory lane with his Madsen Motorsports Teo-Pro car. “When Billy ran out of gas, Timmy got caught behind him, it just parted, I had a run coming through the middle and then it was like, ‘Here we go.'”

When Decker slowed, McCreadie took evasive action to avoid him. Hearn, who had been a few car lengths behind McCreadie in third place, saw a door open between Decker and McCreadie off turn four and blasted right through to steal the race in unlikely fashion.

McCreadie, 40, settled for a second-place finish, 1.31 seconds behind Hearn at the checkered flag. It was his second runner-up performance in the event — he was second to Decker in 2010 — and his fourth podium finish in the last five years, topped by a victory in 2012.

Carey Terrance of Hogansburg, N.Y., who led laps 16-55 before pitting and rallied to contend for victory during the race’s final 50 circuits, finished a career-best third. Chris Raabe of Napanee, Ont., also registered a career-best 358-Modified 150 finish of fourth and Stewart Friesen of Sprakers, N.Y., was fifth after rallying from a late pit stop on lap 70.

Decker, who started from the pole position and led laps 1-15 before ceding the spot to Terrance and then pitting on lap 21 during a caution flag, limped into the pit area to refuel and was credited with a 20th-place finish.

Hearn, who started seventh, made his required pit stop with Decker, McCreadie and more than a dozen other drivers on lap 21. He was third out of the pits behind Decker and McCreadie and chased his two longtime rivals until the fateful 146th lap.

“I saw Decker kind of glitch a little going down the homestretch into one (after scoring lap 145) and then he picked up and went again,” said Hearn, who made several unsuccessful bids to overtake McCreadie for second late in the race. “Then on the back straightaway we caught him, and then he moved to the inside so I knew that he was thinking, ‘I’m done.’

“But he picked up again and was carrying some pretty decent speed into (turn) three and I kind of laid back a little bit (from McCreadie) because I said, ‘We’re gonna be going through that corner and he’s gonna run out of gas, and if we’re tucked up too tight we’re both gonna have to lift.’ The timing of it just worked out — when Billy ran out of gas Timmy was tucked in his back bumper and he had to move out to the right real quick and he was already slowed … and I came at them guys with a head of steam and the opening was there right through the middle of them. It was pretty crazy.

Decker reached pit road without bringing out a caution flag, allowing Hearn to sail virtually uncontested to the finish line.

“The funny thing was, I think in the end we probably had the best car in open track,” said Hearn, who made his 29th career start in the NAPA Super DIRT Week 358-Modified headliner. “I was pretty much able to drive off effortlessly (after grabbing the lead), and those last two or three laps all I pretty much did was think about the fuel — although really, at that point, it wasn’t gonna be a lot of conservation because it was too late. We had run pretty hard most of the race.”

Hearn actually ran faster than he would have preferred considering he had to stretch his load of fuel for 129 laps after during the race’s second caution period. Any thoughts he — as well as Decker and McCreadie — had of taking it easy to save gas were destroyed by Terrance, the soon-to-be 34-year-old driver who had a fast car and wasn’t afraid to push it to the limit because he pitted on lap 56 and had no fuel worries.

Terrance made an impressive move on lap 76, sailing around the outside of Hearn through turn one to grab fourth place. He pulled off a similar pass on Billy Dunn of Watertown, N.Y., exiting turn two on lap 79 to snatch third place, and on a lap-91 restart Terrance drove around the outside of McCreadie in turn three to land in second place.

Only Decker remained between Terrance and an upset victory, and on a lap-104 restart he went for it all. Terrance’s bid to overtake Decker with an outside charge in turn one failed, however, when he nearly ran into Decker’s rear bumper and slid high, allowing McCreadie and Hearn to drop him to fourth.

Terrance regained third from Hearn on lap-112 restart, but five circuits later Hearn was back in control of the position and Terrance never climbed higher until Decker’s untimely departure. But Terrance’s presence kept the leaders from into conserve mode — and perhaps led to Decker’s demise.

“We ran harder than we all wanted to,” said Hearn. “I think Carey forced the issue on that. I’m gonna give him credit for running Billy out of gas because I think the pressure he put on all of us made us run harder, and that may have been the difference in the end.”

Terrance, however, didn’t consider the role he played in the outcome. He just was satisfied to emerge as a serious threat in his eighth career 358-Modified 150 start.

“We’re pretty much a rookie here compared to these guys and it’s just good to run against them,” said Terrance, whose previous best finish was ninth in 2012. “We just got a little greedy on the (lap-104) restart and tried to take the lead on Decker. We should’ve probably waited a little while … but rookie mistakes. We’ll come back to try to make up for that.”

McCreadie, meanwhile, tried to put on a happy face after finishing second, but that was a hard task because he knew a victory slipped right through his fingers. He had enough fuel in his Vinnie Salerno-owned car to reach the finish but couldn’t take advantage of the only driver ahead of him running dry.

McCreadie ended up being in the wrong place at the wrong time.

“When Billy ran out, I was just too close and ran into him,” said McCreadie. “I know Billy really well, and I’m sure he was getting off the track because he thought it would help (and) he thought maybe I’d be able to make it (on fuel if a caution didn’t extend the race).

“When we went into (turn) three I went out and tried to poke him on the outside and he still had enough fuel and it crowded me up and just got me out of the rubber. When I diamonded back down I just had a big run and I never expected him to be out (of gas). I expected him to at least get down the straightaway, and it didn’t work.

“I’ve been coming here since I was a little kid, and I know one thing about Syracuse,” he added. “You can talk about luck, but it doesn’t seem to come to a McCreadie all that often, that’s for sure.”

Hearn has experienced his share of misfortune over nearly four decades of racing at the Moody Mile, but he’s also enjoyed great breaks like he caught on Saturday and in last year’s 358-Modified 150 when Dunn ran out of fuel on the final lap to hand him the victory. It’s all part of the mix of luck and preparation that a driver needs to be a record-breaking winner at the track.

Of course, for Hearn, it’s a lot about the preparation side of things.

“This is all about homework,” said Hearn. “(It’s about) getting the fuel mileage and guys behind the scenes working hard on everything and making sure all the little details are taken care of, making sure if we ever get ourselves in a position to win a race like that, that we’re able to — and that’s exactly what happened.”

Hearn was certainly honored to join Decker as the most prolific 358-Modified 150 winner in history. He already owns more Syracuse 200 Big-Block Modified triumphs than any other driver, an accomplishment he’s proud of for one main reason.

“It keeps my sponsors and my owners invested in me,” said Hearn. “I think that’s the most important thing.”

The race was slowed by eight caution flags for 37 laps.

The only significant accident occurred on lap 53 when Greg Atkins of Keeseville, N.Y., slammed the wall between turns one and two with his car’s front end in a tangle with Tim Sears Jr. of Clay, N.Y.

NAPA Auto Parts Super DIRT Week XLIII concludes on Sunday (Oct. 12) with the running of the $50,000-to-win big-block Modified Syracuse 200. Also on Sunday’s card is the DIRTcar Sportsman Championship 30 and the BACC-OFF Pro Stock Championship 25, which kicks off the action at 11 a.m.