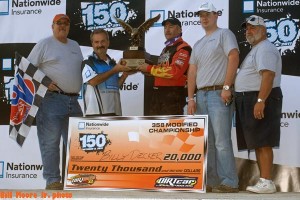 And thanks to his record sixth career victory in the marquee DIRTcar 358-Modified event, Decker has a chance to put an even bigger stamp on the biggest DIRTcar racing week of the season.

Decker, 45, of Unadilla, N.Y., is on the verge of a perfect Super DIRT Week XL at the Syracuse Mile – pole positions, heat wins and main-event triumphs in both the Big-Block and 358-Modified competition. He will bid to complete his amazing sweep in Sunday’s SEF 200 Presented by Ferris and Snapper, which is scheduled to take the green flag at 2 p.m.

“Now all that’s left is the Big-Block race (SEF 200) – and obviously, a lot rides on tomorrow. If we don’t have success, we’ll be quite disappointed. We’re tickled to death with what we’ve got, but the big prize is tomorrow afternoon and that’s the one we’re after.”

Decker used his tried-and-true formula to capture the $20,000 top prize in Saturday’s Nationwide Insurance 150. He led laps 1-34 before making his mandatory pit stop on lap 35 during a caution period, restarted in second place after the field cycled through and moved back in front on lap 54 with a pass of Napierville, Que.’s Martin Roy. He made no mistakes the remainder of the distance, keeping Stewart Friesen of Niagara-on-the-Lake, Ont., at arm’s length most of the way to reach the checkered flag first.

Friesen, 28, made a last-ditch bid to overtake Decker on a lap-148 restart but couldn’t pull off a pass, leaving the defending SEF 200 champion with a second-place finish. He matched his career-best run in the Nationwide Insurance 150.

Tim McCreadie of Watertown, N.Y., raced third behind Decker and Friesen from lap 73 to the finish, giving him an unexpectedly solid outing after it appeared his hopes might be dashed when he clipped the inside rail and flattened his 4-Star Racing mount’s left-front tire while running second. He slowed to bring out a caution flag on lap 32 and pitted for a tire change the following circuit, but that didn’t sink him; he vaulted right back to fifth place for the ensuing restart after virtually the entire field pitted on lap 35.

Tim Fuller of Watertown, N.Y., finished fourth in the J&S Racing car after chasing the top-three drivers for the race’s entire second half, and Ronnie Johnson of Duanesburg, N.Y., placed fifth in Alton Palmer’s machine for his second straight top-five finish in the Nationwide Insurance 150.

“It’s certainly a testament to preparation from the foundation up,” said Decker. “John Wight and LJL Racing afford us some great equipment. We’ve had the same Bicknell car three years out of the four (wins) and the same engine four years in a row now. Everything works, and everything’s led by crew chief Scott Jeffery.

“To come back here every year and have (the car) put together so it stays together, and everything lasts – I’m in a very fortunate position to have those resources and equipment available to me.”

Decker didn’t reach the finish line without experiencing one anxious moment, however. After Danny Johnson of Rochester, N.Y., backed into the turn-four wall to bring out the race’s seventh and final caution flag on lap 144, Decker received an especially strong challenge from Friesen when the green flag flew with two laps to go.

Friesen dived to Decker’s inside entering turn one to electrify the crowd, but Decker managed to power back ahead on the outside of turns one and two and beat Friesen to the checkered flag by 1.347 seconds.

“When he pulled up alongside of me and it was a dogfight into one, I thought, This isn’t pretty,” said Decker. “I had the right groove. He could’ve got there, but he would’ve had to go through me to get there. Him being a sport, he held ‘er down, which is good.

“I sure didn’t need that on the last lap,” he added with a smile. “I wanted it to be a sleeper.”

Friesen, who rolled in turn four during last year’s Nationwide Insurance 150, didn’t want to go down without a fight when the late caution flag presented him a final opportunity.

“I was working all race long on my restarts,” said Friesen, who drove a Teo-Pro car owned by Tad Parks with a C.C. engine provided by Tom Cullen under the hood. “We were close (on the previous restart); I kind of bumped (Decker) with my right-front going into one. Then we got a great run on the last restart. I was able to get down to the inside and pull alongside Billy.

“It didn’t stick real good going down there in the slick, but it was exciting. There was a lot more rubber up top, so I really had no business going in there that hard on cold tires on a restart. But Billy kind of gave me a lane and I tried not to bump him too much. If I could’ve got up another five feet on him, I think we could’ve pulled ahead.”

Rick Laubach of Richlandtown, Pa., finished sixth, matching his career-best finish in the 150 in 2008. Outside polesitter Andy Bachetti of Great Barrington, Mass., was seventh; teenager Larry Wight of Phoenix, N.Y., placed eighth; Matt Billings of Brockville, Ont., registered a career-high finish of ninth; and Mat Williamson of St. Catharines, Ont., was 10th to earn his third consecutive top-10 finish in the 150.

Among the contenders who ran into trouble were Jimmy Horton of Neshanic Station, N.J., who ran out of gas on lap 145 while running sixth; Sussex, N.J.’s Hearn was 10th when a scrape forced him to pit with a left-front flat tire on lap 102; and Willy Decker of Vernon, N.Y., who relinquished sixth place on lap 123 due to an apparent engine problem.

Danny Johnson’s rough day left him one lap down in 22nd at the finish, but he remained atop the DIRTcar 358-Modified Series points standings entering next weekend’s season finale at Brockville Ontario Speedway. His lead stands at 30 points over Danny O’Brien of Kingston, Ont., who gained entry to the 150’s field by a provisional and merely started and parked his car for a 43rd-place finish; 42 points over Williamson; and 46 points over Carey Terrance of Akwesasne, N.Y., who won Saturday’s 15-lap Last Chance Race but finished 30th in the 150.

Results of Nationwide Insurance 150 at the New York State Fairgrounds