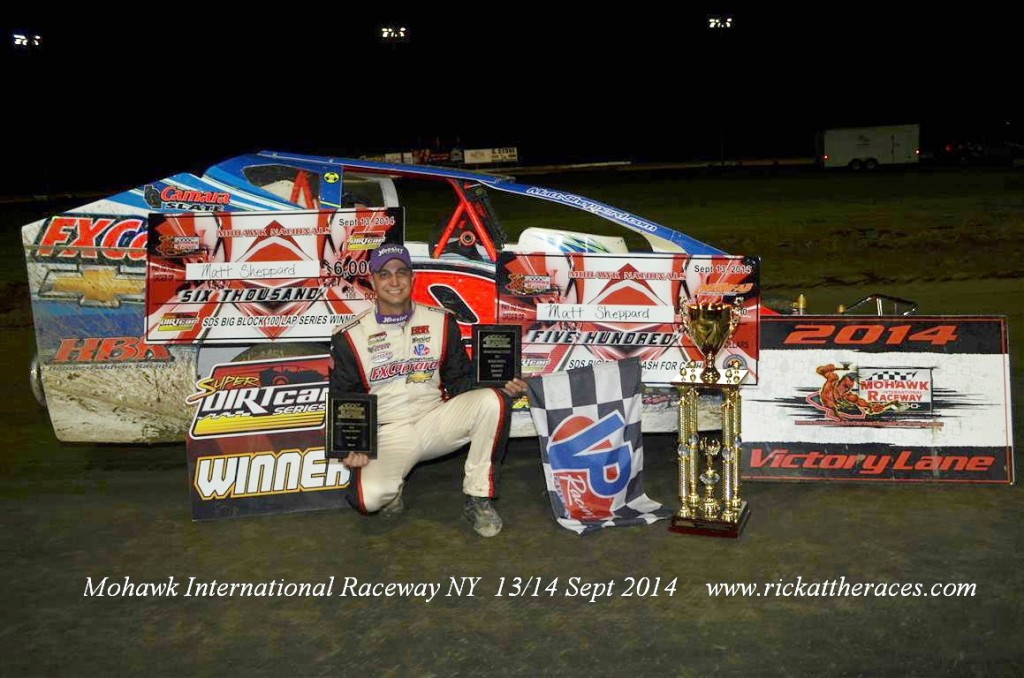 “I just want to thank the whole team, it was a great team tonight,” the three-time Super DIRTcar Series champion said after Sunday morning’s victory. “It was good, started on the pole and lead all 100 laps.”

Sheppard started the 100-lapper on the pole after a inclement weather cut short qualifying rounds and caused officials to set the field according to Super DIRTcar Series point standings. He claimed the initial lead over Billy Decker, of Sidney, N.Y., who started on the outside front row.

A lap-1 caution for David Papineau, who slowed to a stop in turn 3, slowed the pace early on. Sheppard had the advantage at the restart as Decker and Larry Wight batted for second place.

The yellow flag wove a second time in lap 9 as smoke billowed from the S & W Service Centre No. 6m of Mat Williamson. Off the restart, a three-car collision in turn 3 brought another caution before the field could gain any momentum.

The field restarted in lap 18, Sheppard keeping his lead and Jimmy Phelps charging ahead of both Wight and Decker to pull into second place. Dexter Stacey’s No. 66w flipped in lap 26 bringing the field to a stop under red flag conditions.

Sheppard made a switch on the next restart, choosing the outside front row rather than the inside, and the changed worked out well for him. He kept his lead over Phelps before the race slowed under in lap 42.

Strong on restarts all night, Sheppard powered ahead and reached lapped traffic in lap 53. Behind him, Phelps maintained second, and Wight and Decker were third and fourth respectively. Erick Rudolph, who started in a backup car from the rear of the field cracked the top-five in lap 55.

As the leaders maneuvered through lapped traffic, Phelps was able to gain some ground on Sheppard.

“That was probably the only thing that really shook it up,” Phelps said. “A couple times there in traffic he’d get slowed up. The leaders had so many more miles per hour than the guys in the back that it really made it interesting coming into traffic how the guys were lined up in front of you.”

Despite Phelps’s gain in lapped traffic, he was unable to challenge Sheppard for the lead before the next caution brought the field back together.

“The lapped cars were a little tough. They were running side-by-side,” Sheppard admitted. “The track went away enough that it was tough to tell which groove you were in, but when we were in lapped traffic it gave us a little bit better of an idea.”

The yellow flag waved again in laps 59 and 72, giving Brett Hearn, who had fallen from his third starting position to tenth early in the race, the opportunity to gain positions off restarts. By lap 75, the eight-time Super DIRTcar Series champion was challenging Wight for fourth place.

In lap 82, leaders were again battling slower cars at the back of the pack. Hearn was able to leverage lapped traffic to get around Decker for third in lap 82.

Another collision in lap 95 brought the field to red, with the No. 74 of Matt Billings flipped in the backstretch.

“I think we were as good as he was for the better part of the end of the race. We were too even to really make anything happen,” Phelps said. “Coming out of here with a second place is the start of what is hopefully going to be a good second half of the season.”