Nine minutes, forty-seven seconds. That’s all it took for Bobby Pierce to carve-up the quarter-mile bullring of Peoria Speedway and collect his first Hell Tour Feature win of the season.

“It was a fun race,” Pierce said. “This place has become one of the most fun tracks on the Hell Tour, really.”

Pierce and the rest of the leaders ducked-and-dodged their way through lapped traffic over 40 laps in caution-free fashion, throwing slide jobs and making on-the-edge passes for position in the second DIRTcar Summer Nationals event of the season Wednesday night.

Setting a blazing pace in the opening laps, Pierce got to second and chased outside polesitter Jason Feger around until he caught him with a big slide job in Turns 1-2. Both had been running the top side and were diving into the first wave of lapped traffic when Pierce threw it to the bottom with a lapped car right ahead of them both, then slid up in front of Feger to take the spot away.

The race pace was hot, and Pierce cranked it up a few degrees warmer in wasting zero time with lapped traffic. He gobbled-up the slower cars one-by-one, passing them almost as soon as he reached them, and stretched his lead out to over two seconds with 10-to-go.

“Once I got the lead, I was just trying to put a good distance on second,” Pierce, of Oakwood, IL, said. “With all the lapped cars, I didn’t want to waste any time with them because if Jason or Brian caught up to me, it probably would have been easy for them to get their nose in there and throw a slider.”

As Pierce began to slow the pace down slightly, about a half-second per lap compared to the opening circuits, Feger began to reel him in with seven-to-go. Pierce encountered another cluster of traffic and had his lead chopped in half by the time he began to work through the slower cars. Once he cleared them, however, he was home-free.

“Fortunately, I found [the bottom lane] when I went down to pass a lapped car,” said Pierce, when he learned the field behind him was closing. “I felt my car had really good traction in the black. After that, I moved down for them last few laps just to protect.

“I was definitely feeling some heat there. Whenever you’re stuck behind a lapped car, even for like a lap, it feels like an eternity.”

The DIRTcar Summer Nationals action picks right back up at the quarter-mile oval of Davenport Speedway in Davenport, IA, on Thursday night, June 16. If you can’t be at the track, watch every lap live on DIRTVision. 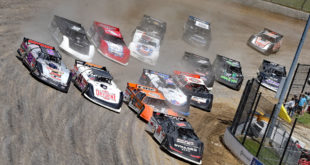