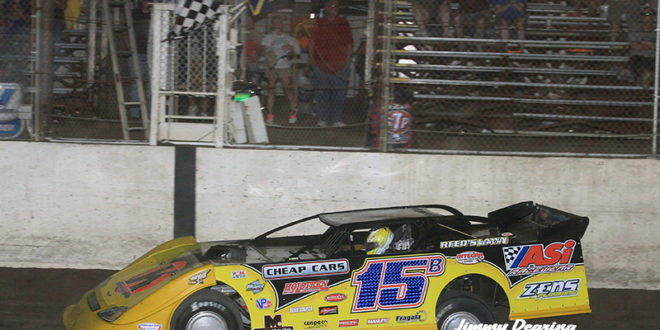 PEVELY, Mo. — June 28, 2014 — Brian Birkhofer recorded his first win of the 2014 DIRTcar Summer Nationals season on Saturday night after sliding past Billy Moyer with four laps left to secure the $10,000 checkered flag at Federated Auto Parts Raceway at I-55.

Birkhofer and Moyer dominated the front row to start the 40-lap feature event, with the latter sitting on the pole. Moyer looked to continue his dominance of the 1/3 mile oval, rolling into the track winning the previous three DIRTcar Summer Nationals events held there from 2010-2012.

Moyer cleared Birkhofer on the initial start and looked to have the car to beat early, but Birkhofer stayed within striking distance, stalking the leader for the first half of the race. Moyer would lead most of the race, but with four laps remaining, Birkhofer caught an opening underneath Moyer and cleared him exiting turn four.

Birkhofer lead the remaining four laps, holding off Moyer and Bobby Pierce, who rallied from an eighth place start, to claim the checkered flag at Federated Auto Parts Raceway at I-55, his eleventh career DIRTcar Summer Nationals victory.

Randy Korte and Brady Smith rounded out the top five.