Blankenship passed Terry Phillips of Springfield, Mo., for the lead on lap 53 and never looked back. He secured the biggest win of his decade-long racing career – a star-making triumph worth $46,000 – by reaching the checkered flag 1.757 seconds ahead of Union, Ky.’s Darrell Lanigan of Union, Ky., whose late bid to finally put the World 100 on his resume fell short.

A low-key racer who has come of age as a championship contender this season on the Lucas Oil Late Model Dirt Series, Blankenship kept an even keel during his Victory Lane celebration with his father/car owner Don and crew. He had a hard time grasping the significance of what he had accomplished in front of a massive crowd that ranked as one of the largest in the history of the historic high-banked, half-mile oval.

“It’s unbelievable,” Blankenship said with reverence after becoming the 27th driver – and first from the state of West Virginia – to win dirt Late Model racing’s most prestigious event. “I can’t describe being up here (on the winner’s stage).

“I’m not a real emotional type of guy. I’ve been let down so many times by expectations being so high (at Eldora), when it finally happens it’s almost just surreal. It’ll soak in about Wednesday and then I’ll be really elated and probably go party some.”

As Blankenship cruised out front and Lanigan vainly attempted to run him down, the most compelling late-race battle was for third place. Three-time World 100 winner Scott Bloomquist of Mooresburg, Tenn., came out on top of the three-car tussle, grabbing third from Phillips on lap 94 and then turning back a furious outside assault from 16-year-old Bobby Pierce of Oakwood, Ill., to register his 16th top-five finish in 24 career World 100 starts.

Pierce, who started from the outside pole and led laps 8-13, settled for a fourth-place finish in his spectacular first-ever World 100 appearance. The rising young star drew some of the loudest cheers from the crowd as he went toe-to-toe with veteran drivers throughout the race.

Phillips, who started from the pole position and led laps 1-7 and 15-52, slipped to a sixth-place finish in his eighth career World 100 start but first since 2006.

No one broke through traffic in the 100-lapper quicker that Blankenship. He was only ninth when the race’s first caution flag flew on lap 21 for a flat right-rear tire on the car driven by Brandon Sheppard of New Berlin, Ill., but he reached fifth on lap 36, took third from Pierce on lap 44, passed Lanigan for second on lap 48 and sailed into the lead with a smooth slide underneath Phillips on lap 53.

“We’ve had a good car here all week and hit on a little something last night,” Blankenship said of his Rocket machine. “I felt real good about a long (green-flag) run, so I was real surprised I took the lead as early as I did.”

With the race running without interruption following a second and final caution flag on lap 56 for the slowing car of Chatham, Ill.’s Brian Shirley, Blankenship set a torrid pace. He built a near straightaway advantage by lap 70, giving him more than enough cushion to absorb Lanigan’s late-race charge.

Lanigan, 43, wrestled second place from Phillips on lap 77 and managed to cut Blankenship’s nearly two-second lead in half within 10 circuits. But Blankenship found the rhythm he needed to keep Lanigan from drawing any closer.

“I was really nervous about the whole race,” said Blankenship, whose three previous World 100 A-Main starts resulted in progressively better finishes of 21 st (2009), 11th (’10) and fifth (’11). “I thought they were breathing down my neck the whole time, so I was driving pretty hard and didn’t know how long my stuff was gonna stay under me.

“Evey time I tried to be a little more patient I would get a push and I couldn’t even run down the lapped cars. I decided to just start driving it in like I was when I was trying to catch the leader and actually the car handled a lot better.”

Lanigan had a perfect view of Blankenship’s impeccable mount while chasing the leader late in the distance. Try as he might, the alltime winningest WoO LMS driver couldn’t catch Blankenship.

With the loss, Lanigan surpassed Freddy Smith as the driver who has made the most career World 100 A-Main starts (20) without reaching Victory Lane. He recorded his second runner-up finish and eighth overall top-five run in the event, but that was little consolation to the hyper-competitive racer.

“It’s just disappointing to come up here and be that close,” said Lanigan, whose previous second-place finish came in 1999. “I already got a couple ideas of what we should’ve done, but it’s too late now. We were just a little bit off.

“(Blankenship) kind of surprised me to be that good down there in the middle. He could run that middle to the bottom. I tried it and felt good there, but he was just a little bit better. I reeled him in and got within six, seven car lengths, but then I couldn’t close up no more.”

Lanigan could only look on from afar – or, more precisely, the post-race inspection area in the pit area – as Blankenship celebrated on the winner’s stage.

“We’ve had an up-and-down season and really slipped the last four or five weeks,” said Blankenship, who briefly led the Lucas Oil Late Model Dirt Series points standings in the middle of the summer before falling back. “This is just a really big booster to us.

“You definitely have doubts,” he continued, “especially when you come out here (to Eldora) and can’t even run last in a B-Main – that’s happened before too. It’s just a really competitive sport, and that’s actually why I love it so much. You can be the fastest car one week and the slowest car the next. It makes wins like this even more special.”

Finishing in positions 7-10 were Earl Pearson Jr. of Jacksonville, Fla., who ran as high as fourth for a short period after the lap-56 restart; Jonathan Davenport of Blairsville, Ga.; Jared Landers of Batesville, Ark.; and Eddie Carrier Jr. of Salt Rock, W.Va.

Two five-lap ‘Scrambles’ for drivers failing to earn transfer positions in the B-Mains were also contested, with Randy Weaver of Crossville, Tenn., and Morgan Bagley of Longview, Texas, earning $1,000 each for their victories. 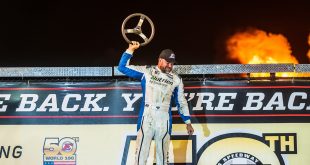