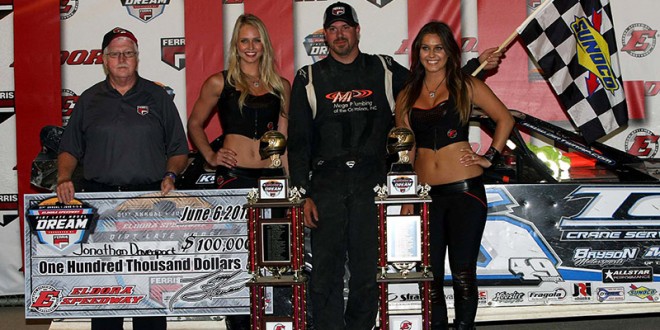 That help came in the form of heartbreak for Scott Bloomquist. The Mooresburg, Tenn., driver snuck by Davenport on a lap-91 restart and turned back his furious last-lap challenge to win the 100-lap race in a thrilling finish Saturday night at Eldora Speedway. But Bloomquist was denied what would’ve been his record seventh Dream victory when his car weighed 25 pounds light at the scales.

Bloomquist was disqualified and Davenport was declared the winner of the DIRTcar-sanctioned race, giving the 31-year-old Blairsville, Ga., racer his first career victory in one of Dirt Late Model racing’s traditional crown jewel races and an unprecedented sweep of Eldora’s three-night event.

“I don’t know if I deserved to win it because I didn’t win it the way I wanted to,” said Davenport, who also claimed preliminary feature victories at Eldora on Thursday and Friday for a total weekend earnings of $107,500. “But we definitely had a dominant car all week. Scott had a really good car and I knew that it was probably going to be down to me and him at the finish.

“I hate it for him. This definitely isn’t the way I wanted to win my first crown jewel. I wanted to actually beat that guy. He’s so hard to beat.”

While Davenport may not have crossed the finish line first, his K&L Rumley Enterprises Longhorn Chassis was arguably the race’s fastest car. Advancing from the sixth starting spot, the current Lucas Oil Late Model Dirt Series points leader took the lead from Clanton on lap 61 and pulled away to a comfortable advantage until the race’s first caution waved with 89 laps complete.

With Bloomquist alongside him for the double-file restart, Davenport again pulled away when the race returned green, but the yellow flag slowed his pace again two laps later.

The second restart didn’t go as well for Davenport, and Bloomquist was able to power into the lead through turns one and two. Pearson also briefly pulled ahead of Davenport, allowing Bloomquist to pull away slightly as Davenport worked to regain the second spot.

After clearing Pearson with five laps remaining, the high-running Davenport went to work chasing down Bloomquist. He reached Bloomquist as the two leaders raced toward the white flag, but the hampered machine of Jimmy Owens of Newport, Tenn., blocked Bloomquist’s middle groove, forcing Bloomquist to move into high line and block Davenport’s strong charge.

Davenport made a quick maneuver to dive under both Owens and Bloomquist entering turn one on the final lap, but his attempt to slide up in front of Bloomquist came up just short. Bloomquist pulled back ahead exiting the second corner and raced toward an apparent victory.

“That lap I ran him down, I never even checked it in three and four,” Davenport said of his run through turns three and four on lap 99. “I was just trying to get between (Owens) and Scott. That didn’t happen so I tried to get under them.

“I didn’t know if (Owens) was going all the way to the wall, but I was going to either hit him or the inside wall. I didn’t know what was going on there. I just tried to make something work. But I knew I probably just loss my chance at winning the Dream right there.”

The three victories during the Dream weekend extend Davenport’s personal win streak to six races. He scored a Lucas Oil MLRA victory on May 21 and his four Lucas Oil Series victories this season include a sweep of the tour’s May 29-30 doubleheader.

The success this season cements Davenport’s place among the current list of Dirt Late Model racing’s elite drivers. Reaching that pedestal has been a long, hard road for Davenport full of both ups and downs that all make the Dream weekend sweep even sweeter.

“All those heartaches we’ve had, all those bad lucks, just the little bitty stuff that’s happened here and at other places, it just all went out the window,” Davenport said. “It’s just like a breath of fresh air. It was definitely something awesome.”

Finally clicking in the Moring Motorsports Black Diamond Chassis he piloted for the weekend, Pearson was impressive with his run from 18th into the top three. But his hopes of scoring a Dream victory to go along with his 2006 World 100 triumph were dashed when he couldn’t keep up with Bloomquist and Davenport in the closing laps.

“Every time we got on the racetrack we were learning,” said Pearson, who scored his career-best Dream finish. “I started 18th and fell back, but once I got my rhythm going, to drive up to second, we’re tickled to death for Moring Motorsports and Black Diamond Chassis.”

With his third top-three finish on the weekend, Erb again impressed in the new Black Diamond Chassis he debuted at the Dream weekend.

“To come out here with a new car and get a (preliminary feature) win and battle up front, it just shows how good these cars are,” said Erb, who fell one spot short of matching his career-best Dream finish of second in 2011. “To come home third, we’re proud of that.”

Josh Rice of Verona, Ky., finished sixth, completing a stellar weekend for the 16-year-old racer, who finished third in a preliminary feature on Thursday night. Jared Landers of Batesville, Ark., charged from his fourth starting spot to lead laps two through four but faded to seventh at the finish.

Bloomquist, who was credited with a 28th-place finish, was not available for comment after the race.