And Kirchoff, 27, will also be chasing history this weekend. After doubling up at Dodge City he owns 13 career CLMA DIRTcar Series victories, moving him past Kelly Boen of Henderson, Colo., for second on the tour’s alltime win list and within striking distance of the record 16 triumphs held by Brett Hallmark of Grand Junction, Colo.

“I didn’t even realize I was close to the record,” said Kirchoff, one of the top DIRTcar Late Model talents in the Rocky Mountain region. “Hopefully we can move a little closer to it this weekend.”

Kirchoff brings plenty of momentum into the Black Hills/Gillette double-dip. He tore through the field twice last weekend at Dodge City, advancing from the eighth starting spot to win the Friday-night preliminary and charging from the 12th slot in Saturday evening’s 30-lapper to complete his sweep of the ‘Six Shooter Showdown.’

“It was a long drive to Kansas but it was definitely worth it after the weekend we had,” said Kirchoff, who pocketed a total of $2,700 for his triumphs in the first-ever CLMA and MDLMS events under the DIRTcar Racing banner. “The track was beautiful, and the shape and size (three-eighths-mile) kind of reminded me of my hometown track (Gillette Thunder) but with a wall around it.”

Kirchoff, who won the CLMA DIRTcar Series championship in 2007, has won six CLMA events at Gillette and one at Black Hills Speedway over the past three years.

“It’ll be nice to have two races within a two-hour drive of home,” said Kirchoff, who currently works at his father Ed’s K&K Import Repair after being laid off from his engineer’s job at the Jacob Ranch coal mine in Wright, Wyo., following a change of ownership. “We’re off to a good start and want to keep it going.”

A December 2008 graduate of the South Dakota School of Mines & Technology in Rapid City, S.D., Kirchoff is a proponent of the CLMA and MDLMS tours now running under the sanction of DIRTcar Racing, which provides him and other drivers from Colorado, Wyoming, Kansas and nearby states more opportunities to be part of DIRTcar’s UMP points program.

“The sanction with UMP and DIRTcar is one of the best things that could happen (for the series),” said Kirchoff, who got a taste of racing in DIRTcar UMP’s heartland when he traveled to the Midwest to follow the grueling UMP Summer Nationals tour in 2007. “Hopefully it keeps building out here.”

Kirchoff will face plenty of tough competition this weekend, including Colorado drivers Scott Lewis, Dean Moore and Dave Garmann and Casper, Wyo.’s Jason Schirkolk, who finished 12 points behind Eddie in the 2009 weekly Late Model points standings at Gillette. Both races will pay $1,200 to win and $200 to start.

For more information on the CLMA DIRTcar Series, visit www.coloradolatemodel.com or contact CLMA Promotions Director Cory Moul at 303-263-5489 or cmoul-mhjc@comcast.net.

The Midwest DIRTcar Late Model Series, meanwhile, will be back in action this Saturday night (May 15) at Minneapolis (Kan.) Raceway. The event pays $1,200 to win and $200 to start, with bonus money guaranteeing at least $250 for drivers traveling more than 200 miles and $300 for those who come from at 300 or more miles away to compete. 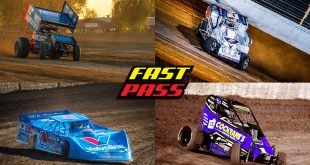