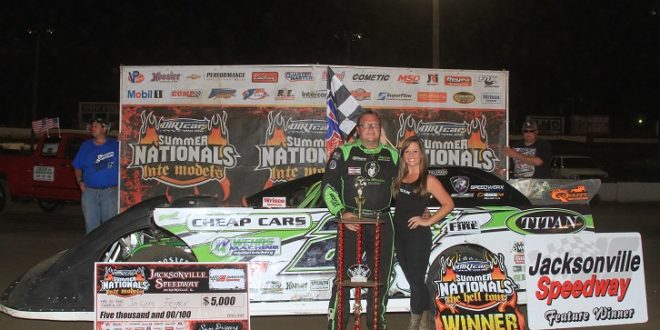 Feger, making his first start since rolling his car Sunday night at Lincoln Speedway,  started the 40-lap feature on the outside of pole-sitter Billy Moyer Jr. At the drop of the green flag, Feger shot around Moyer Jr. for the lead and never looked back. Moyer Jr. hung with Feger for a few laps, but after an early race caution the leader began to pull away from the field.

Moyer Jr. mounted a charge around lap 24, as he closed to within a car-length of the leader, but Feger switched to a lower racing line and pulled back away from second place, which began to come under fire from third place.

Three time DIRTcar Summer Nationals champion Shannon Babb, who started in the fourth position, surged to the front of the field, eventually overtaking Moyer Jr. for second. Unfortunately for Babb, Feger had already built an insurmountable lead on the field.

Feger maintained a straightaway lead for the remainder of the feature event, dominating the night and scoring the well-deserved $5,000 checkered flag at Jacksonville Speedway, just three nights after his wild ride at Lincoln Speedway.

“Hard work pays off,” said Feger who scored his second DIRTcar Summer Nationals victory in the last three years at Jacksonville Speedway. “We got lucky with the roll [Sunday night] – we only broke some bolt on suspension stuff and bent the body up a little – but we put in some long hours the last couple of days to get ready. We worked real hard and got the results tonight.”