Macon Gets Exciting Start to Season

(Macon, IL) The weather was warm much through Saturday with abundant sunshine and temperatures in the 60s. Yes, spring was here. Another sign of spring was the return of the roaring engines at the 66-year-old dirt track, Macon Speedway. Six racings classes gave both fans and drivers an incredible show and a hopeful sign that 2011 will be an exceptional racing season.

Nearly 130 cars and packed grandstands welcomed the 4th Annual Spring Fling and the start of dirt track racing season. Past and defending champions made their presence felt at the 1/5th dirt track on Opening Night.

Following the opening with qualifying of Late Models, this season sponsored by Chevrolet, there were multiple heat races among the six classes (UMP Late Models, UMP Modifieds, UMP Sportsmans, UMP Street Stocks, UMP Pro Hornets and Amateur Hornets) to set-up six very exciting features that had race fans on the edge of their seats.

Touchstone Energy Sportsman opened the feature events with a dazzling display of 15 laps of racing. Though the race yielded many cautions, the action during green flags made things very fast-paced. Nick Macklin of Argenta started behind Dennis Vandermeersch, native of Springfield, but after a spinout by Vandermeersch to put him to the back of the field, Macklin took control and never let up. Chasing him down the entire race was the defending champion in the class, Dave Crawley, Jr. Both drivers, along with Mike Pickering of Decatur, ran the low groove of the track but no errors were made by Macklin as he took the first feature of the year.

The last Late Model feature of 2010 saw Ryan Unzicker win in the Lite Beer Twin 50s 50-lap make-up race. Unzicker would end 2010 with a win and start 2011 the same way. Running along with Cory Daugherty through the majority of the show, Unzicker weaved his way through lapped traffic and took control. The race would get close again following a caution flag as Unzicker had separated himself from the second-place Daugherty and gave Daugherty a second chance to get close enough to take control. Unfortunately, Unzicker’s car was too fast and too quick and ended up in victory lane.

Larry Russell, Jr. started the year where he finished 2010, as well, and grabbed his first feature of the year. The veteran of the Speedway and multi-time Street Stock track champion claimed that he was running a limited schedule in 2011 but the win still felt nice. Troy Dodson of Cerro Gordo challenged Russell for the full 12 laps but was unable to take home the top honors in the Street Stock class.

Adam Webb won three Amateur Hornet features in 2010 and moved up to the Pro class. He showed he was capable of competing in the class with an 8-lap feature win, beating out 19 other cars. His main competition was David Lauritson, who was his first row partner.

The evening wrapped up with Kyle Maxwell getting the Amateur Hornet feature. He finished 2010 with four features and built momentum to 2011 by not touching or adjusting his car all winter long. Jerad Matherly took second in the Amateur class.

Opening Night is in the books and the 66th consecutive season got off to a tremendous start. Possibly the only complaint would be the weather after the sun went down; it was chilly. But it is April and it is expected. A full show is expected again next week with more great racing action. 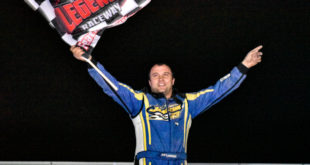 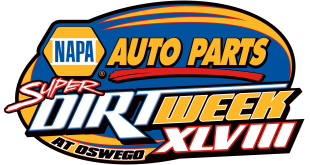 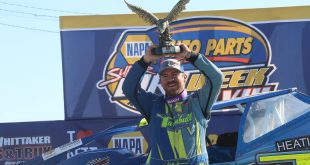