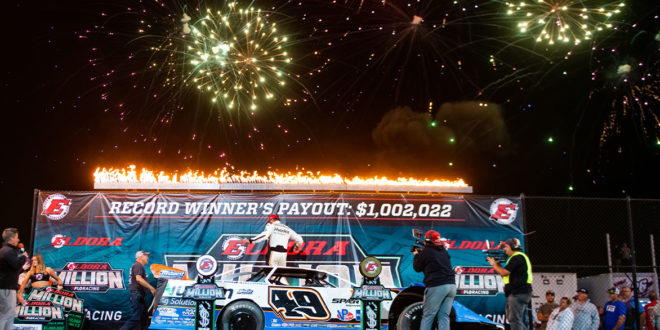 Jonathan Davenport’s racing career can be summed up in two words. Battle-tested.

From his early struggles on asphalt to his crown jewel wins on dirt, the Blairsville, GA driver has overcome them all.

That’s why it’s only fitting “Superman” faced another battle Thursday at Eldora Speedway to conquer the wealthiest prize in dirt Late Model history.

Davenport dominated most of the 101-lap Eldora Million, setting a torrid pace throughout the first 75 laps. However, that’s when the battle toward the checkered flag truly began.

Tim McCreadie caught Davenport, setting up a war between the two veterans. They traded the lead back and forth for more than 20 laps with slide jobs and crossovers before Davenport got the advantage. 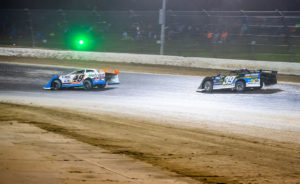 “T-Mac” fell victim to a flat tire with two laps to go, bringing out a caution and setting up Davenport’s final challenge—a hungry Chris Madden searching for his first Eldora Crown Jewel win.

As the green flag flew, Madden mashed the gas on the inside of Turn 1, inching ahead of Davenport as they thundered down the backstretch.

However, “Superman” wouldn’t let Madden be his kryptonite, passing back the Gray Court, SC driver in Turn 3 and holding on to win the second installment of the Eldora Million—worth $1,002,022.

Despite the million-dollar prize, the amount of money he won hadn’t set in, as he felt it was similar to his other five Eldora crown jewel triumphs.

“I haven’t even thought about the money yet,” Davenport said. “I ain’t really going to think about that until it gets into the bank account. It’s just another crown jewel here at Eldora. That just makes it all of them I’ve won except for The Stream, and I don’t think we’ll run that again.

“It’s just an awesome opportunity to come here. This place is so great.”

Davenport, who earned $12,000 more in a preliminary win Thursday afternoon, had a game plan when he lined up next to Madden for the final restart. He knew how important it would be to get the jump off Turn 2.

“If [Madden] tried to slide me, I knew it was so rough in the center that I could turn back under him,” Davenport said. “But he was smart enough not to do that and got a good run off [Turn 1 and 2.]

“I just had to keep my composure and let off, and let his dirty air pass me, and then I could turn back under him and try to slide him at the other end.”

The Georgia campaigner’s Eldora Million win is his sixth win of the season and his sixth crown jewel win at Eldora Speedway.

“I think we win,” Madden said. “It’s the same old story, those guys can fire and run faster than I can but after we make green flag laps and run five or six laps we get better.

“I keep saying this every time, but I guess it’s something to do with my package, my setup, my balance, whatever fits me. It just takes a little while to get going. We came from 20th or 19th or something to race for the win; that’s all you can ask for.”

Devin Moran, from Dresden, OH, rounded out the podium Thursday night at Eldora. He’s had his eye on the prize since the event was announced, trying to keep the race in the family name after his dad’s win in 2001. 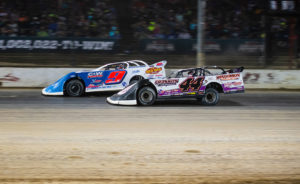 The “Mailman” stated he thought it may have been different if he was second during the last caution.

“I just wish we could’ve restarted second,” Moran said. “I definitely wouldn’t have been quite as nice as [Madden]. I just wanted this one so bad.

“But this racecar was badass all day long. We had a really good piece, and we put ourselves in contention, and this is by far the best we’ve ever been here.”

Tim McCreadie finished fourth, bouncing back after a flat tire while racing with Davenport. It was something the Watertown, NY driver didn’t realize until right before it happened.

“I must’ve ran over something; I didn’t notice it until coming for two to go,” McCreadie said. “I layed on the right rear a little bit going into [Turn 3], and it shook all the way down the front stretch.

“I don’t think it was blistered or chunked. I just ran something over; I don’t know. It might have been going down a bunch at the end. It just wasn’t meant to be.”

Chris Ferguson finished fifth, keeping the momentum from his preliminary Feature win on Thursday afternoon. Despite rounding out the top five, he was disappointed with the finish as he yearned for more.

“Having the momentum definitely was a bit of a letdown,” Ferguson said. “After the Heat Race, I felt like I was going to be one of the fastest cars in the Feature. But sometimes you just over-adjust, and we missed it, but luckily, we have two more days.”

Jonathan Davenport solidified his climb to the top of the Dirt Late Model world with his Eldora Million Victory. The win only proves anyone who comes up against “Superman,”, especially at Eldora, must go through a battle-tested veteran to earn their spot in Victory Lane.

UP NEXT: The DIRTcar Late Models return to Eldora Speedway on Friday, June 10 for the 28th Dirt Late Model Dream.

Follow live coverage and updates of the Eldora Million on all of DIRTcar’s social media channels and DIRTcar.com.