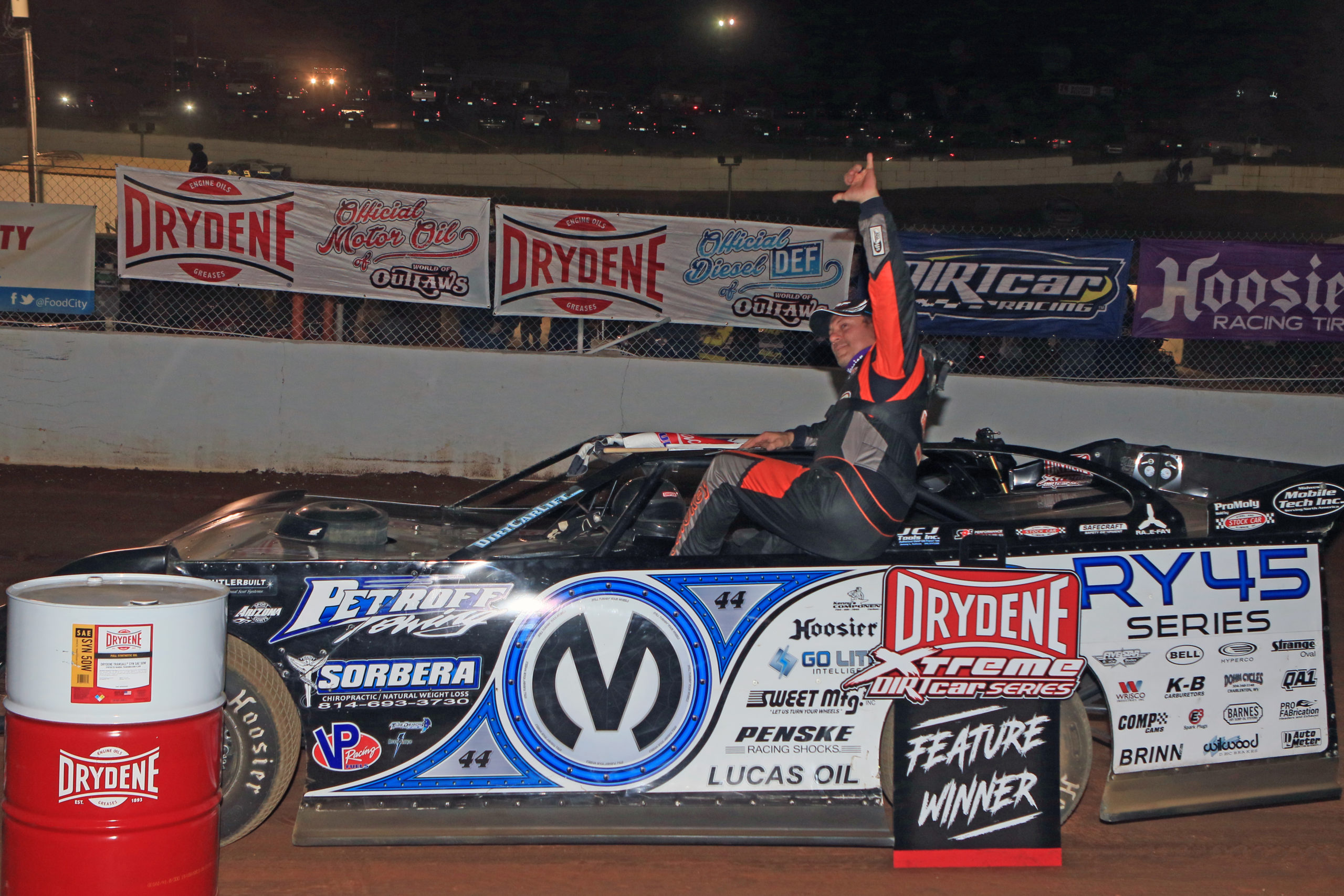 SMOKE AT THE GAP: Madden Goes Two-For-Two at Volunteer

Chris Madden played his cards perfectly on Saturday night to win Volunteer Speedway’s inaugural running of the Grinch 40, making a fantastic move to the inside of runner-up Kyle Strickler for the lead on lap 23 to pick up his second Drydene Xtreme DIRTcar Series win in-a-row.

Madden now extends his points lead to eight over Saturday’s third-place finisher Brandon Overton, who drove the wheels off of his Wells Motorsports #76 Longhorn in the final corners to claim the final podium spot.

In short, Madden dominated the entire day. Quickest in Hot Laps, fastest in Qualifying, won his Heat race and put on a show in the Feature. But it wasn’t easy; the tough Southeastern competition made him work for it.

After redrawing the sixth starting spot, Madden began his charge to the front patiently, cracking into the podium by lap 15. But after a restart on lap 17, he really cracked the whip, closing in on leader Strickler’s rear bumper just three laps later.

“I think [Strickler] was just a little bit free and we were able to maneuver a little bit better than he was,” Madden said. “We had a good racecar tonight, and Strickler did too. He hasn’t been in a Late Model that long, but he did a great job.”

With Madden working the very bottom of the track and Strickler leaving the door open one groove higher, Madden was able to wedge his way completely underneath The Highside Tickler and take the lead coming out of turn four to complete lap 22.

By this time, the leaders had already entered lapped traffic again, and Strickler eventually got caught up in behind a few of the slower cars. This allowed Madden to pull away and seal the deal for his first win of the season at The Gap.

“A 40-lap Feature kind of worries me a little bit to start sixth, that’s not real long,” Madden said. “Fortunately, we had a couple of cautions work our way and our car was good enough that we could maneuver around [in traffic]. We had an awesome racecar tonight.”

A smooth, virtually dust-free track surface in the Feature led to some great racing, which Madden said he was very pleased with.

“The racetrack was good enough to run two or three-wide, so that was the good part,” he said.

After two of six races complete in the inaugural year of the Series, Madden currently leads points and is the clear favorite to win the $20,000 championship check at Modoc Raceway on Feb. 29. The Gray Court, SC-pilot isn’t making any absolute promises, but as of Saturday, he’s down to chase that championship prize.

“It’s whatever these guys, Scott and them, decide to do,” Madden said. “Our plan is to keep going as long as our work program at our shops doesn’t interfere with our big-picture stuff.”

Strickler was able to defend his runner-up spot through the checkered flag to pick up his first top-five finish in the Series after giving up the lead in heavy lapped traffic. He led the first 22 laps, ducking-and-weaving his way through the slower cars, all while playing defense on several restarts. But in the end, nobody was going to deny Smokey of his victory on Saturday night.

“The lapped traffic was sketchy, for sure,” Strickler said. “I knew where Chris started and I saw him start clicking them off when we had all those restarts. I knew he was really good, and when the signal guy was telling me someone was really close, I figured it was him.”

“I was really comfortable up until we got into that one lapped traffic deal where they were two-wide in front of me and stacked three-deep ahead of them.”

Strickler now sits third in overall Xtreme Series points and is one of 11 drivers with perfect attendance through the first two races. He’s only driven his new Longhorn Chassis three times now, and he’s been working in the shop every day he can to get things right as he attempts to finish every race on the tour.

“We spent a lot of time on the car this week, just trying to find a standard and getting back to something I can base myself off of and learn,” Strickler said. “I’ve never been here before, everybody’s always told me I’d love this place. In Late Model racing, it’s so important to have confidence and show up with something you feel like you can perform in.”

Brandon Overton may have started ninth and rode the struggle bus on his way to the front, but what an effort he made in the final four corners to get around Shannon Buckingham for the final podium spot.

Big Sexy got his car wound-up on the topside before taking the white flag, Buckingham just a bumper’s length in front. He climbed the steep Volunteer banking and pulled even with the #50 out of turn two until the momentum shot him into third heading into turn three. He held that spot to the stripe and picked up his second-straight top-five on the tour, but said he felt like there was more in the tank when the checkered dropped.

“Once my tires got some heat, I feel like I was getting better and better,” Oveton said. “I would have liked to see 50 laps or another caution or something when I got to third.“

On his way up to the font, Overton was met with a few unexpected challenges on the slick, high-banked surface that tested his sense of patience.

“I was trying to be patient, but every time I would try to slow down and not hurt my tires, somebody would come sliding across my nose,” Overton said. “I finally just started giving it back to them. You really had to take your racecar up to get around anybody.”

The Drydene Xtreme DIRTcar Series heads even further south next Sunday for a race at Lavonia Speedway on Dec. 15. Get yourself a Fast Pass subscription today to catch all of the action live on DIRTVision!