By David Smith
Meeker, Oklahoma – May 8, 2010 – “The car was set up perfectly; all I had to do was drive it.” Those were the words of Springfield, Missouri’s Eric Turner as he took the lead on lap ten and never looked back to take the third race of the “Showdown in the Heartland II” featuring the O’Reilly National Championship Racing Association and MARS DIRTCar series late model divisions Saturday night at Brill Motor Speedway in Meeker, Oklahoma.

After a brief caution at the start of the thirty lap feature for NCRA rookie of the year contender Jace Kaser of Lincoln, Nebraska, pole sitter Jack Sullivan of Greenbriar, Arkansas took control of the complete restart and quickly opened up a five car length lead as the green flag fell. Fellow outside front row starter Wendell Wallace battled fourth starting Al Purkey for the runner up position while third starting Turner settled into the fourth position.

By lap three Turner started his move to the front as he passed Purkey for third and one lap later got underneath Wallace for the runner up position. Turner, who won the MARS season opener on March 12th in Clarksville, Tennessee, stayed right on the leaders bumper as the front runners began entering lapped traffic on lap nine. On lap ten Turner made his move entering turns one and two and, staying on the bottom of the track, got a run off turn two to separate himself from Sullivan to take the lead.

Turner began to switch to cruise control aboard his Hatfield Racing Engines powered GRT late model stock car as he had opened up a half stretch lead by the races midway point. Sullivan, Wallace, Purkey and Jeremy Payne were your top five at this point with Purkey beginning to make his move on Wallace for the third position. On lap twenty-three Purkey, a former two-time O’Reilly/NCRA champion, finally got underneath Wallace to take over that third spot.

But back up front there was no catching Turner as he cruised the rest of the caution free feature unchallenged to take the half stretch victory. “I have got to thank Rushin Towing and Swoffords AMOCO as they really help us make this possible.”

Sullivan would settle for the runner up spot while Purkey and Wallace settled for third and fourth respectively. Current O’Reilly/NCRA points Kelly Boen of Henderson, Colorado was the racers hard charger as the five time series champion started thirteenth to round out the top five.

Mechanical gremlins struck MARS DIRTCar series rookie of the year contender Gary Christian in his heat race forcing him to use a provisional and settle for a 22nd place finish and The Brake Man tough break award of the evening.

“Showdown in the Heartland II” featuring the MARS DIRTCar Series and the O’Reilly/NCRA late model divisions will conclude the four race swing on Sunday night at Monett Speedway in Monett, Missouri.

The National Championship Racing Association would like to thank the following contributors for their involvement with the late model division for the 2010 race season:

The Joie of Seating Runner up – Jack Sullivan 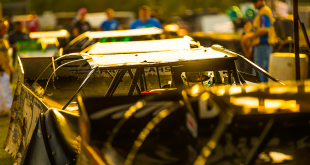