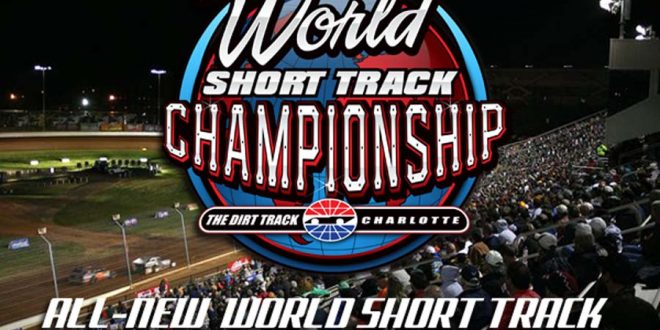 CONCORD, N.C. — Aug. 3, 2016 — The World Short Track Championship, an all-new, three-day event featuring the best weekly racers from throughout the United States, was announced today by DIRTcar Racing. The event, hosted at the Dirt Track at Charlotte (N.C.), Thursday, Oct. 20 to Saturday, Oct. 22, 2016, will put on the center stage nine divisions in pursuit of a purse in excess of $120,000

“The World Short Track Championship is sure to be ‘lots of laps’ and ‘lots of fun’ giving weekly drivers  from 9 different divisions the chance to stand on the big stage at Charlotte,” said World Racing Group CEO Brian Carter. “This massive event will make Charlotte the epicenter of dirt track racing in the United States and bring the best and brightest from around the country together for two incredible weeks.”

Participating divisions at the World Short Track Championship are:

Each entry will receive a free pit camping permit in the pit area for the entire weekend and an invitation to the Friday night bonfire worthy of a true homecoming. Competitor registration for the World Short Track Championships opens on Thursday, Oct. 20 at noon.

“Nowhere else in the World can you see this many dirt racing divisions housed at one track for such a huge weekend,” said DIRTcar Racing Director of Series and Sanctioning Sam Driggers. “We are excited to be able showcase everything from late models to 4 cylinders, winged sprint cars to Northeast Sportsman Modifieds at the Charlotte Dirt Track “

Thursday’s slate of events will feature a four-hour open practice with rotating divisions. On Friday, there will be qualifying events for all divisions with six of the nine divisions running all-star invitational features. Saturday though will be unlike any other event in the country, with all nine divisions competing for an inaugural World Short Track Championship victory.

Complete competitor information, including division payouts, will be available on Aug. 22 by visiting DIRTcar.com.