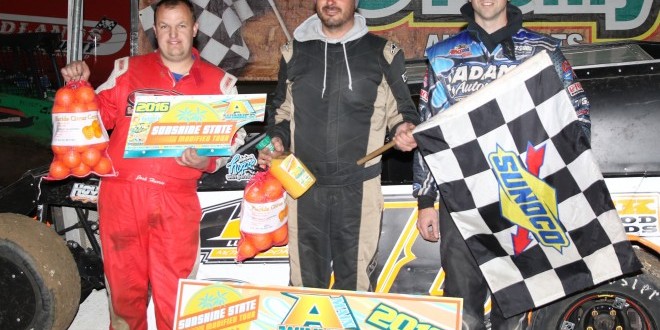 Davenport Dominates Round Seven at Bubba

OCALA, FL (February 5, 2016) – With round six of the Sunshine State Modified Tour (SSMT) being rained out at North Florida Speedway in Lake City, the tour headed back to Bubba Raceway Park for the first of two consecutive nights at the egg-shaped 3/8th mile. Once again Tait Davenport drove to the front in the main event and became the first repeat winner of the SSMT.

Todd Neiheiser and Kevin “Buzzy” Adams lined up on the front row for the 30 lap feature. It took four attempts to get the first lap completed, but once they did Adams led the way in his Brandon Ford No. 40.
Neiheiser, Nick Allen and Davenport all fought for the second spot early on, but as things got sorted out Davenport took the position with a slider on Allen off of turn four. Neiheiser held tough in the top five throughout the first half of the race, but began to fade as the race wore on.

A yellow flag on lap 14 erased Adams comfortable lead and put the No. 18D of Davenport right on his rear bumper. The green flag was displayed once again and Davenport drove deep into turn one. Adams rode the low side of the speedway, but Davenport got a great run off the cushion and the two went door to door down the back straightaway. Davenport cleared Adams off of turn four to lead at the line where they were given the crossed flags.

Once out front Davenport could not be touched as he cruised out to a huge lead and led the final 15 laps to become the SSMT’s first repeat winner. Adams, Josh Harris, Johnny Broking, and Will Krup rounded out the top five.

Trent Young came into the night as the SSMT points leader, but a subpar qualifying lap and heat race put the Crofton, KY driver in the B-main. Young was able to grab a transfer spot, which put him inside row 12 for the A-main. Young wheeled his way up to seventh when the checkers flew in the A-main, but it wasn’t enough to retain his point lead. Heading into round eight Saturday night at Bubba Raceway Park, Adams holds a 14 point lead over Young as the hard charging Davenport sits in third 23 points behind Adams.

Catch every lap of the SSMT live on DirtNation.TV.