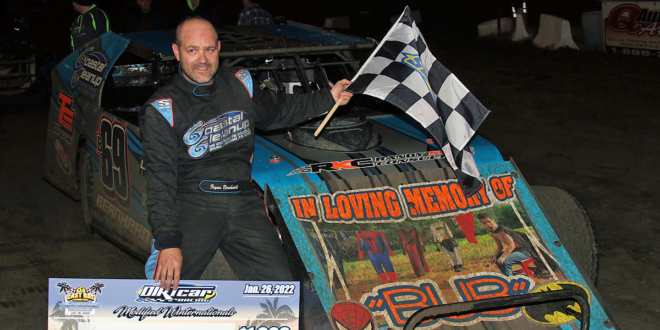 With seven track championships to his name, Bryan Bernhardt has seen the highest levels of success at East Bay Raceway Park. But on Wednesday night, he celebrated in Victory Lane like he’d never been there before.

In fact, it had been three years since his last DIRTcar UMP Modified Winternationals Feature win at the third-mile oval. With his friends, family and crew there to join in his jubilation, Bernhardt felt a deeper sense of meaning in this drought-ending win.

“This is my favorite place in the country,” Bernhardt said. “Every time they race, you can guarantee I’m back there on the backstretch, ready to go.”

Clinching the 2021 UMP Modified track championship was the fourth of his career in the division. But he said there once was a time where that success was hard to come by.

“We came out of the box hot when I first got a Modified, and the next year we were okay – I think we were top-six – but then we just fell off the map,” Bernhardt said.

His 2021 Winternationals campaign did not go the way he had planned either, experiencing mechanical failure multiple times throughout the week. So, he and the team went to Lethal Chassis and Mullins Race Engines and found the ingredients for their success right off the bat in 2022.

“Last year, we went through three motors,” Bernhardt said. “Saturday night, I was like, ‘I don’t want to race,’ and my car owner said ‘We come to race. We’re racers.’ I said, ‘If we break another motor, you’re going to have to buy another one,’ and he said, ‘I don’t give a [expletive].’

“We came out of last year with our heads down. This year, we came prepared.”

A strong effort in qualifying, second in his group only to fastest overall Tyler Nicely, Bernhardt rolled-off ninth on the Feature starting grid. He motored his way up to the front in a hurry, cracking the podium in four laps.

He had his sights set on race leader Nicely, but a rare self-spin by the Kentucky heavy-hitter on Lap 3 sent him to the tail early – much to Bernhardt’s disappointment.

“I’d have given him the biggest Florida slide job he’d ever seen,” he said, when asked what he would have done to get by Nicely on his own. “I get to second and I just start seeing red. I get that close, and I could do some stupid stuff, but I was hoping that he didn’t [spin out] because he’s probably in the top-three best in the country, and I sure would have liked to pass him.”

Fellow Kentuckian Chris Wilson then inherited the lead and looked strong out front through the middle of the 25-lap race, but Bernhardt was mounting a charge behind him. Wilson got out of shape at the exit of Turn 2 on Lap 14, opening the door for Bernhardt to blow by on the top side.

“When I got in [to Turn 2], they said somebody hit one of the yuke tires,” Wilson said of his viewpoint in the incident. “I don’t know if they did or not, and it splashed some water up [on the track]. When I went through, I got it broadsided. I thought I was gonna spin it out.”

Now with the lead and an open track ahead, Bernhardt took off and defended the lead through multiple restarts in the second half of the race to score the win. With 59 other cars in the pit area, he knows the prestige he earned with the feat.

“I have tons of pressure [on me],” Bernhardt said. “Being here and being good every year, when these guys show up and if I don’t run well, then I just look like a chump.”

Crossing the stripe in second, Wilson, of Louisa, KY, was pleased with his car and the result, especially after fending off a constant challenger of his own in 2019 event champion Lucas Lee.

“If I could hit my marks just right, I thought I had a better car than Lee,” Wilson said. “But, I thought that he was more maneuverable than I was.”

Further back in the top-five was the two-time and defending Winternationals champion Buzzy Adams, who encountered setbacks right from the start, forcing him to come from the rear on multiple occasions. DIRTcar tech officials found a deck-height issue with his car prior to his Qualifying laps, which negated his Qualifying time.

This set the veteran from Cameron, WI, to the tail of his Heat Race, where he began mounting a breakneck charge to the front that was abruptly ended after getting collected in a spin in front of him. He drove it back to fourth, setting him up for a Last Chance Showdown win, ultimately placing him 21st on the Feature starting grid. He advanced 16 spots in the Feature to wind up fifth, saving him from getting buried early in event points.

The East Bay Winternationals action continues with Round 2 on Thursday night. A $1,500 check awaits the winner – stay up to date with all the latest news and content by following DIRTcar Racing on Twitter, Facebook and Instagram.