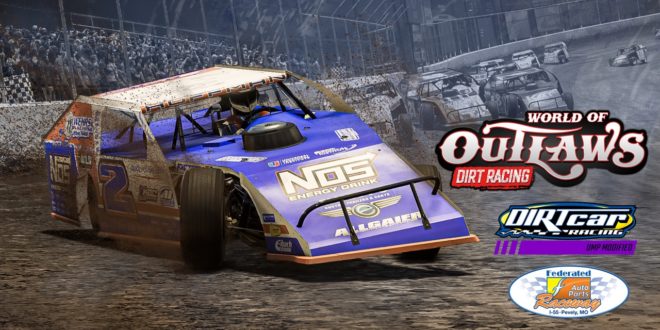 For the first time in its 39-year history, DIRTcar Racing is immortalized as part of a home console video game in the newly released World of Outlaws: Dirt Racing title on Xbox and PlayStation.

Included in the all-new DIRTcar UMP Modified DLC pack are several of the best, most dedicated and most recognizable names in UMP Modified racing. The pack is made available for purchase today on Xbox Series X, Xbox Series S, Xbox One, PlayStation 4 and PlayStation 5. The full roster of drivers included with the initial release is listed below, with more to be added in a future update.

UMP Modified winners Mike McKinney and Kyle Strickler are each a part of the initial release and were excited to be a part of DIRTcar’s first-ever foray into home console gaming.

“I take a lot of pride in being a part of [DIRTcar Racing], and it’s cool to see them get to this point where Walmart is selling videogames with us drivers in it.”

“Playing all the original World of Outlaws Sprint Car games growing up, and now being at the point in my career that we’re in a videogame, that’s really cool,” Strickler said. “It’s definitely going to force me to go out and get a console and play the game with my son being six years old. He and I are really looking forward to it.”

In addition to the 40-plus tracks already included with the base game, Federated Auto Parts Raceway at I-55 is also made available with purchase of the pack, giving users an authentic UMP Modified racing experience at one of DIRTcar’s staple weekly venues.

Both the UMP Modifieds and I-55 are available today for all users who purchased either the Gold Edition of the game or the Season Pass. The pack can also be purchased individually from the user’s respective console storefront.

For more information on World of Outlaws: Dirt Racing or to purchase your copy and the UMP Modified DLC pack, visit WorldofOutlawsGame.com or your home console’s digital store today.