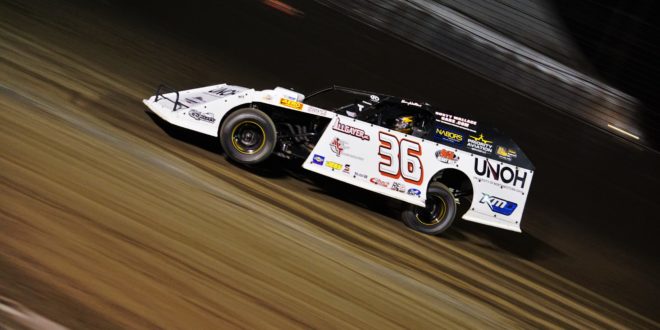 BARBERVILLE, FL – Nov. 18, 2020 – Where dirt track racing veterans Kenny Wallace and Chris Arnold live, colder temperatures are just around the corner. But where they’re headed this weekend is still full of warm weather and set to host the best DIRTcar UMP Modified competition in the country.

The nation’s most elite Modified pilots are set to tackle Volusia Speedway Park this Thursday, Friday and Saturday night, Nov. 19-21, in the 7th annual Emil & Dale Reutimann Memorial, with a $5,000 check in store for the victor in the 50-lap main event.

The event is run in memory of Emil Reutimann Jr., 56, father to Dale, 17, and crew member Gordon Stone, 16. Each were killed after a collision with a drunk driver, just south of Zephyrhills, FL, on Highway 301 while traveling to a race at Golden Gate Speedway in 1973.

For many fans’ favorite dirt track racing social media personality, Kenny Wallace, it’s been a few months since he’s made an appearance on the DIRTVision presented by Drydene cameras – Aug. 16 at Lincoln Speedway, to be exact. Wallace finished eighth in a DIRTcar Summit Racing Equipment Modified Nationals field of 29 cars.

Wallace has already made it to Barberville, as of Wednesday afternoon, after a near-1,000-mile drive from his home in Arnold, MO. Typically, his dirt racing season is done by fall, but 2020 is different. The Hermanator will be making his Reutimann Memorial debut this weekend, and it could not have come at a better time.

“My year did not end the way I wanted it to,” Wallace said of his past few races. “I was not as competitive in 2020 as I’m used to being. We broke a motor about a month before the year usually ends, and we felt like it was time to get a new car. So, we got a new car from Nick Hoffman at Elite Chassis.”

For the past several seasons, Wallace has piloted his usual white/black #36 color scheme across a Lethal Chassis, built by former NASCAR regular David Stremme, of Mooresville, NC. For 2021, Wallace is making the switch to an Elite Chassis, straight from the shop of 2020 DIRTcar UMP Modified national points champion Nick Hoffman.

Wallace made the trip out to Mooresville in October to pick up his newly assembled Elite Chassis and stopped by The Dirt Track at Charlotte for a testing session before heading back home. He said the car was much to his liking and should have what he’s looking for in the 2021 season.

Wallace’s history with the Hoffman family goes back even further than the many years spent competing alongside Nick. Some of his first racing engines were built by Nick’s father, Darrell. Fast forward to 2020, and now it’s Nick’s turn to be the fabricator.

“Darrell and I have always talked about one day, me driving one of his son’s racecars. And it just worked out. My dear friend David Stremme is moving to Pennsylvania in March/April, and with him moving so far away, it just made sense to try something else,” Wallace said.

Lots of Feature wins all around the country this year for both Elite and Lethal, but there’s one other chassis make in the field this weekend that’s won this race twice before and could certainly do it again in 2020.

Chris Arnold, of Matoaca, VA, will bring his Beak Built Chassis #99w to The World’s Fastest Half-Mile for the second time in his career. Beak Builts are fabricated by none other than two-time Reutimann Memorial winner and former NASCAR star David Reutimann in Sherrills Ford, NC.

Normally found around the larger tracks of his region, Arnold is one of the top drivers from his area and will likely be running up front on Saturday night.

“I’m normally pretty good on bigger racetracks, and when I was at Volusia and turned my first laps, I really liked it. Being there gives it more of a taste, rather than watching it on TV, which doesn’t really do it justice,” Arnold said.

His appearance at Volusia will also mark his second appearance before the DIRTVision cameras this year as well. Arnold put together a very strong run in the Summit Racing Equipment DIRTcar UMP Modified portion of the Drydene World Short Track Championship two weekends ago, finishing second only to winner Kyle Strickler in his debut at The Dirt Track at Charlotte.

Arnold started fourth and battled with Stremme for much of the race, finally making the pass for second on the high side in the closing stages. As strong as he was in his first run at Charlotte, he’s got a lot of confidence at unfamiliar venues with a high level of competition.

Those same high-caliber opponents will make one final journey south to Volusia once more in 2020 to compete in one of the biggest UMP Modified races of the year. With 2020 being the event’s first year on DIRTVision, these drivers will take center stage once more before their next appearance in February’s DIRTcar Nationals. And Arnold agrees, it’s about time the division is getting the recognition it deserves.

“I think it’s just been a long time coming. With talents like [Nick] Hoffman, [David] Stremme, [Kyle] Strickler… out Midwest with [Mike] Harrison, [Mike] McKinney and all those guys. I think the Modifieds are at that level of exposure where they need it. When people start watching the racing, I think they’re gonna be surprised why it wasn’t there before,” Arnold said.