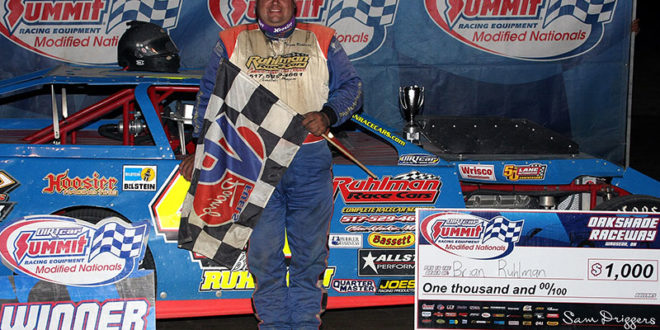 WAUSEON, Ohio  July 19, 2014  Brian Ruhlman charged past Taylor Cook to claim the lead on lap two as he dominated the remaining 24-laps and scored his first win of the 2014 DIRTcar Summit Racing Equipment Modified Nationals on Saturday night at Oakshade Raceway.

Ruhlman, of Clarklake, Mich., started the 25-lap feature event in the third position, just behind pole-sitter Randy Lines. Lines failed to lead the opening lap as Taylor Cook, who started on the outside of row one, surged to the top spot.

Cook, Lines and Ruhlman raced three-wide for the lead on lap two, as Ruhlman eventually captured the top spot exiting turn two. Ruhlman quickly pulled away from Lines and Cook to build an early lead as Matt Hamilton and Jeff Babcock joined the battle for the second position.

With most drivers stuck to the outside line, Hamilton found grip on the inside and charged his way to the second position as he passed Cook, who began to fade back, eventually finishing in the seventh position.

In a race that ran caution free, Ruhlmans early lead proved to be beneficial as Hamilton didnt have enough laps to reel in the leader. Hamilton settled for a second place finish as Ruhlman easily coasted to his first and only victory of the 2014 DIRTcar Summit Racing Equipment Modified Nationals at Oakshade Raceway.

Neither Mike Harrison nor Jacob Poel were present for the Saturday night feature, handing the $5,000 series title to Harrison, who held a slim six-point lead on Poel. Harrisons six wins were good enough for second most of the year as only Poel had more (seven). The two drivers battled all season long for victories, with Poel winning the battle but Harrison winning the war as he successfully defended his 2013 series title, repeating in 2014.