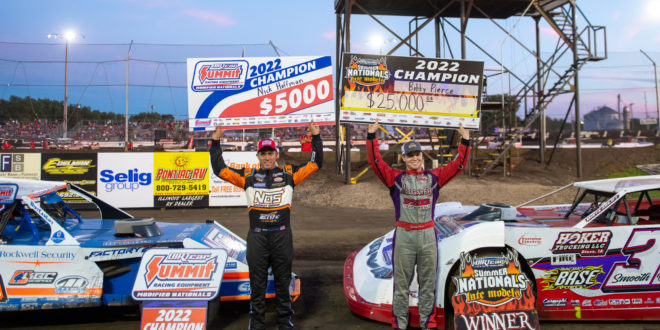 For the fifth time in their young, yet storied careers, Bobby Pierce and Nick Hoffman have conquered the Hell Tour.

Pierce, the 25-year-old from Oakwood, IL, won seven Features on the DIRTcar Summer Nationals Late Model trail this year with 15 top-fives and only two finishes outside the top-10. With a total of 1306 points, Pierce captured the title by 179 points over the tour’s top rookie competitor, Payton Freeman.

Hoffman, the 30-year-old, originally from Belleville, IL, now residing in Mooresville, NC, backed up a videogame-like run to the DIRTcar Summit Racing Equipment Modified Nationals title last year with another dominant season this summer, winning 12 times in 17 starts – only two finishes outside of the top-five – and holding a 426-point lead over runner-up Kyle Steffens.

Though the stats offer a quick glance at their sustained dominance, they do not show the week-in, week-out grind it took to produce those numbers.

BOBBY PIERCE
“It’s pretty crazy when you think about it,” said Pierce, reflecting on his fifth Late Model title – second-most of any driver behind six-time champion Billy Moyer. “I’ve got to give a huge thanks to everyone that’s helped me along the way.”

Growing up in the pit areas of Illinois’ most famed race places, Pierce had a front-row seat to a first-class dirt track racing education from his earliest beginnings, watching father Bob Pierce tear up some of the same ovals Bobby himself dominates today. Bob, a two-time Summer Nationals Late Model champion, has been crew chief for each of his son’s 47 career wins on the circuit, and gets a great deal of credit for all the success the team has enjoyed thus far.

“I couldn’t do it without my dad, starting me at an early age and really building my talent,” Bobby said.

Together, the father-son duo play vital roles in the operations for Pierce Platinum Race Cars back at the shop – the chassis brand that became the framework on which Bobby has now compiled the third-most Feature wins of any driver in Summer Nationals history.

“I love helping my dad along the way,” Pierce said. “He helps me, and I help him try and make the cars look good. He gives me a good car a lot of the time, especially at these Illinois tracks.”

NICK HOFFMAN
Since rejoining the Summit Modified championship chase in 2019, Hoffman has amassed 56 Feature wins in 111 races. That means he’s won slightly over half of all Summit Modified races contested in the last four years.

What’s his secret? Hoffman said it starts with a good crew. He and lone full-time crew member Mason Beadles traveled up-and-down the road this summer, miles from home, and are headed back to The Old North State with another big check in-hand.

“I couldn’t have done it without him, he’s the best crew guy in the pit area in Modified or Late Model racing,” Hoffman said. “Not even with just the car – when you’re on the Hell Tour and you have issues with your haulers, any of that type of stuff… Generators are always an issue on the hot summer days, and he’s one of those guys that can fix anything for me.”

Hoffman’s also won the DIRTcar UMP Modified national points title each of the last three years, going for a fourth by season’s end. The wins he gathers on the Summit Modified tour accounts for a big chunk of his win total each season.

“It’s a lot of fun to be able to come out here and do this many races in this short a span of time,” Hoffman said. “It leads me into trying to race for this national title, which, at the end of the day, we’re here to do.”

Though his reign of dominance across the UMP Modified world has continued for yet another season, so has his hunger for a new challenge. Hoffman, owner and founder of top Modified chassis brand Elite Chassis, has again turned his attention to Late Models a few times this year, piloting a house car for Cowpens, SC’s Barry Wright Race Cars. It’s a path he hopes will lead to a full-time Late Model career.

“The Late Model side is where I want to be racing full-time,” Hoffman said. “My chassis business sustains itself with the customers I have racing all across the country. I feel like me, as a Modified driver, I could just come in and run 10 or 20 races a year and have fun running big races for money, and then I can go run 60-80 Late Model races. That’s what I’m really focused on.”

He’s enjoyed the success he’s had thus far, driving for several Late Model car owners over the past few years, and proudly displays his Modified accomplishments with an eye toward that same level of success in a DIRTcar Late Model.

“I’ve had a lot of fun racing with Barry here in the last two weeks,” Hoffman said. “This is what I’m focused on – some type of Late Model ride, whether it’s with Barry and this ends up being a full-time deal, or whoever else comes along.”