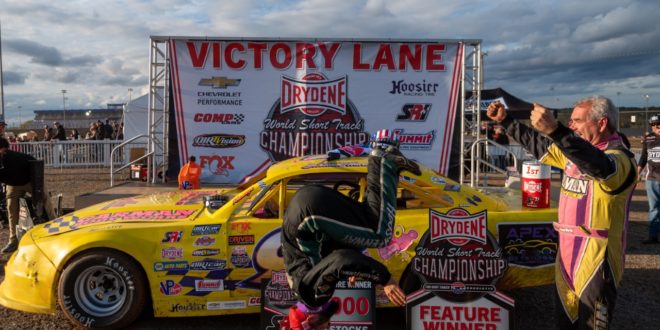 CONCORD, NC – It took 20 laps and every bit of effort possible for Sheldon Martin to come away with the $3,000 SRI Performance Pro Stock championship victory at The Dirt Track at Charlotte. Martin held off charges from Pro Stock ace Luke Horning and Pete Stefanski. Stefanski held on for second and Sean Corr rounded out the podium in third.

The emotion was palpable in Victory Lane. Sheldon Martin, from Mooresville, NC, took all of that excitement and did a backflip in celebration. It was his first-ever win on dirt.

“It’s some of the toughest competition that I’ve gone up against my whole life,” Martin said. “Time after time they’ll rattle your cage but you just have to hit your marks.”

In 2019, Sheldon finished dead last in the SRI Performance Pro Stock championship Feature. Not many drivers can make that claim going from one year to the next. The Pro Stocks were not on the card in 2020 due to the pandemic.

“This is absolutely amazing,” Martin said. “This is my first ever dirt win. I am here with my family. It’s just amazing.”

Martin started on the pole alongside a competitor that knows him well: His Father, Kenny Martin. The pair of yellow-schemed Martin racing machines brought the field to green but the caution flag was displayed immediately as a jangle of cars got together in Turn Two involving the #2 car of Pete Stefanski.

“We went into the corner on the outside,” Stefanski noted. “I know we made contact, the front end jumped towards the wall, and we got a flat.”

Stefanski climbed the banking with his hobbled SRI Performance Pro Stock into the pits to let his crew switch out Hoosier Racing Tires.

On the restart, Luke Horning started moving up and found himself in the catbird seat trying to find a way around Martin for the lead. With 15 laps to go Horning took to the high side in Turn One and clipped the wall, slowing his momentum. He did not recover the ground and settled for fifth.

After that, it was Stefanski’s turn to work on the leader. Each lap the #2 reeled him in until he was on his tail but he could not find a way around at the conclusion of the 20-lap battle. 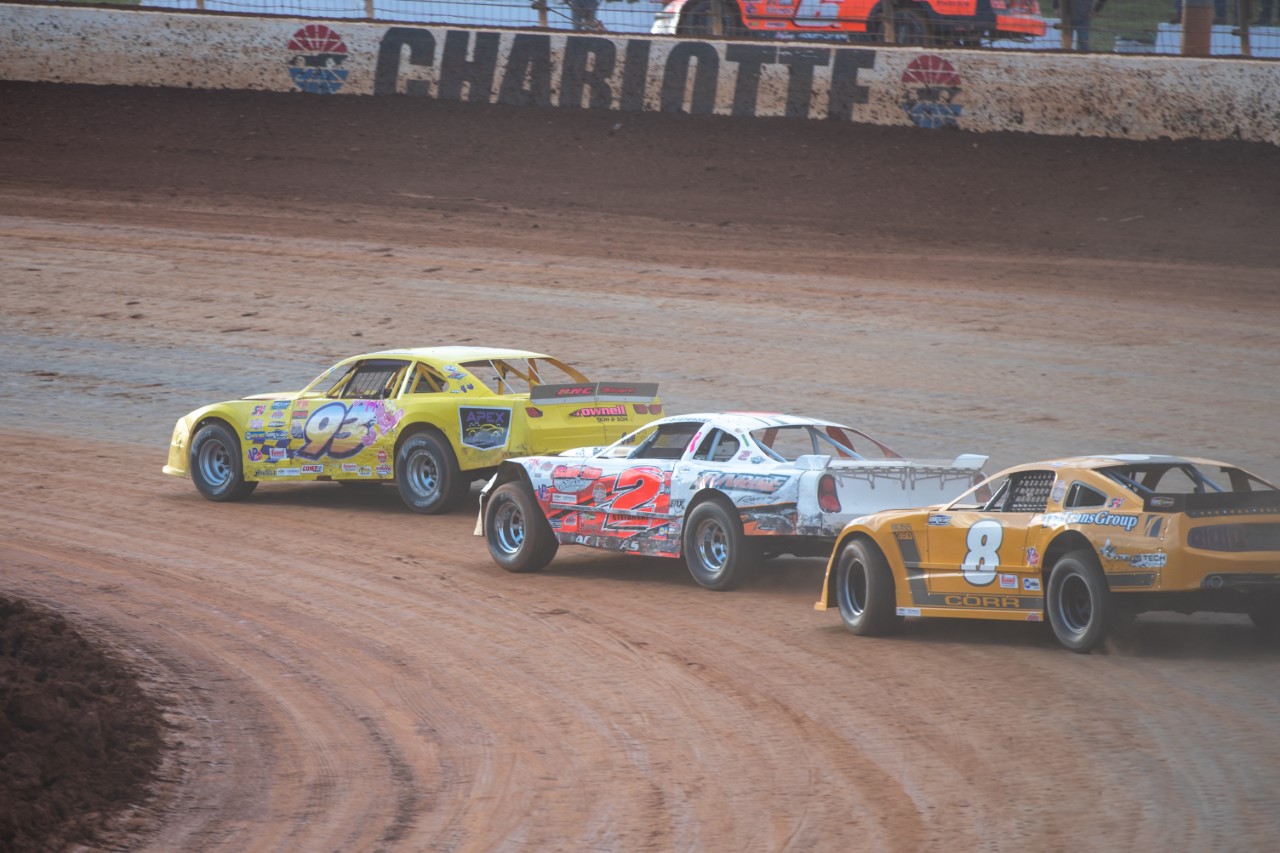 “Getting a flat on the first lap was rough because you have your car set up for those specific tires,” Stefanski said. “But the guys got it changed and while there weren’t a lot of cars, they were good cars. We were maybe a little bit faster [than winner Sheldon Martin] but we would have had to use him up to get there. To finish second on the back bumper of the leader was great considering how it all started.”

Sean Corr, a notable part-time ARCA driver, came away with third. He took a few stabs at Stefanski but whenever Corr got a run, Stefanski would gather it up and take another look at the leader. Time ran out for Corr and he finished the race fifth however the All-Star Invitational Feature awaited him for another shot.

After settling for third and showing a lot of speed in the championship Feature, Sean Corr put it all together to win the SRI Performance Pro Stock All-Star Invitational. Corr was ecstatic in Victory Lane.

“It’s a little slick out there but my crew set the car up perfectly,” Corr said. “They adjusted it knowing it was going to slick over from this afternoon.  They told me to try high and I was a little nervous about it but boy they were right 100 percent. I can’t thank the boys enough.” 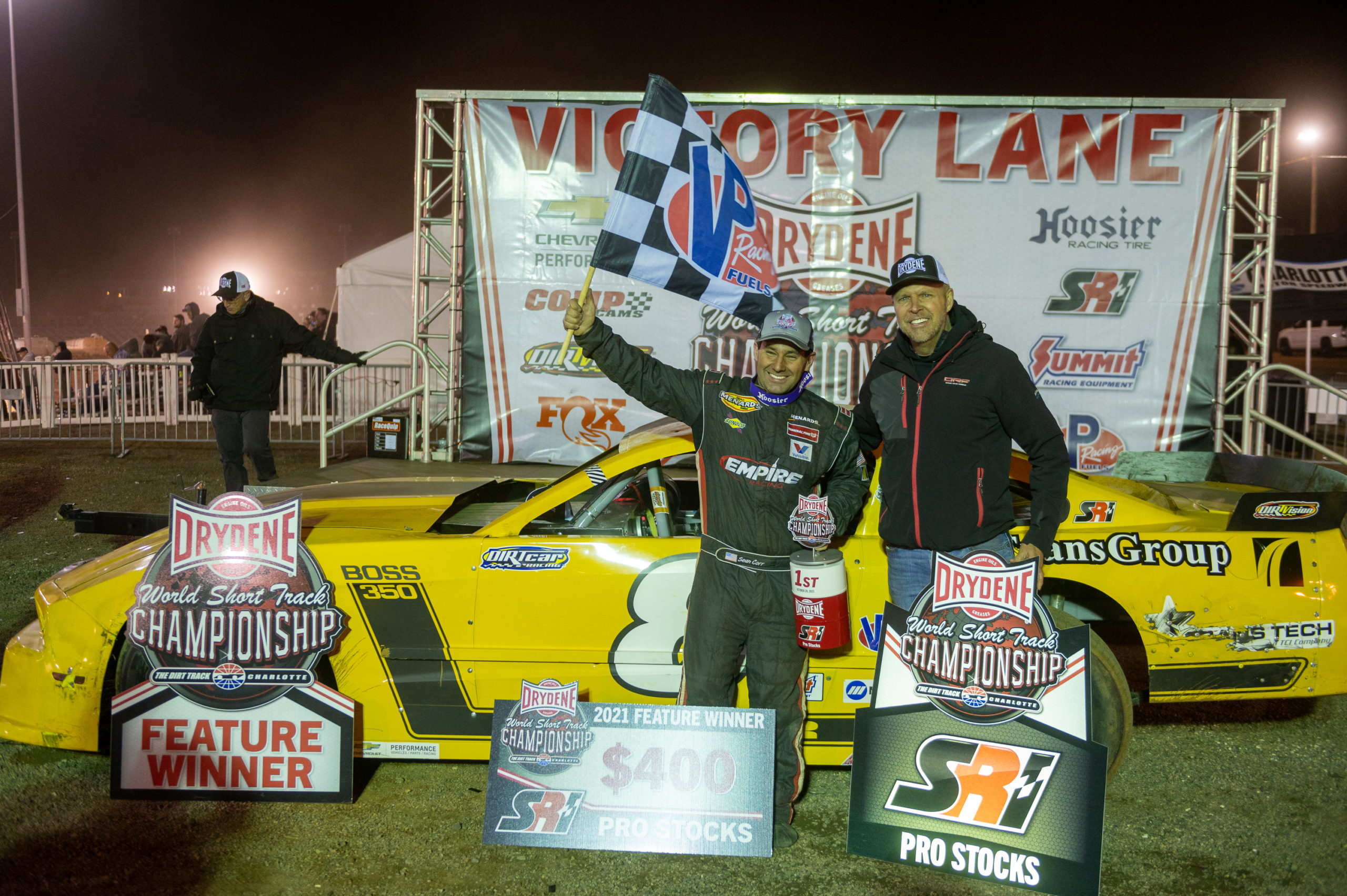 Luke Horning and Pete Stefanski were right there for the win a well. Horning, who struggled in the Feature earlier in the night, took the lead earlier from Corr who started on the pole. On the initial start, Corr fell back to fourth.

Corr then worked his way by Johnny Rivers, then Pete Stefanski who was all over Horning for the lead, and finally the leader in the #2H to collect the Feature win.