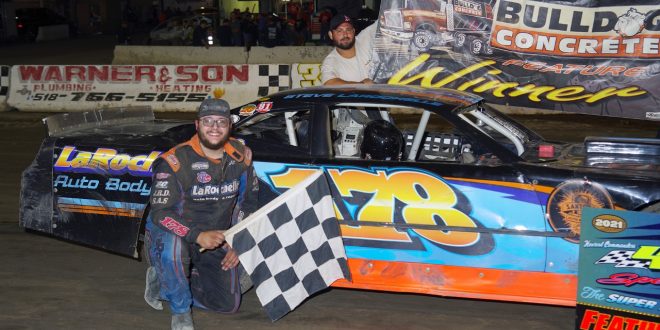 So far in 2021 there have been 81 DIRTcar Big Block Modified races paying points into the Hoosier Racing Tire Weekly Championship. Matt Sheppard and Stewart Friesen each have nine wins. Friesen has won at two more tracks than Sheppard has.

Phelps, NY star Justin Haers has been a standout at Land of Legends in 2021. Last Saturday he took his third win of the season. He’s gearing up for the Gerald Haers Memorial on Saturday, Sept. 18.

The parity and high level of competition in the DIRTcar 358 Modifieds is unmatched. There are four drivers tied with the most wins this season. Billy Dunn, Mat Williamson, Tim Fuller, and Tim Sears Jr. have all visited Victory Lane six times in their 358.

Williamson, Rudolph, and Dunn run one, two, and three in the standings. Rudolph has four wins to his name at Ransomville.  Williamson has had the widest variety of wins getting them at 3 tracks including Brockville Ontario Speedway, Ransomville Speedway, and Cornwall Motor Speedway.

Tristan Draper won two 358 Modified Features in one night at Brockville when he picked up a rescheduled Feature. Ryan Susice won a photo finish Feature at Ransomville over Erick Rudolph.

Andrew Buff, Tyler Corcoran, and Zach Sobotka are becoming household names on the DIRTcar Sportsman circuit. They are all winning at their Hoosier Racing Tire Weekly Championship tracks but also out on the Series tour.

Chad Jeseo having a banner year. He is unstoppable. Jeseo has accumulated 10 wins which is double anyone else in the division. He’s split all of his wins at Albany-Saratoga and Lebanon Valley Speedways.