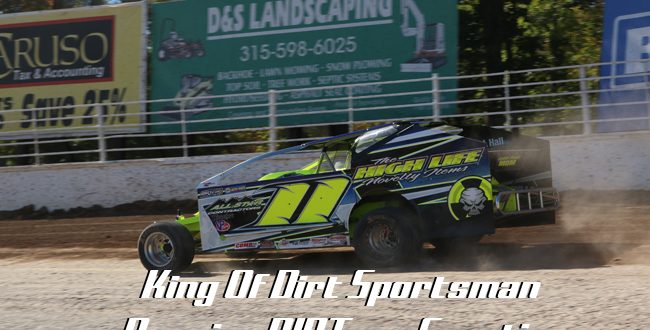 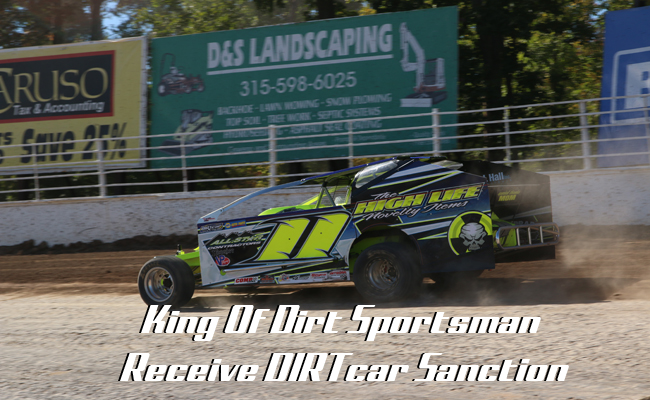 The alliance between King Of Dirt Racing and DIRTcar Racing helps build a regionalized touring system for the Sportsman Modified division. King Of Dirt will serve as the DIRTcar East Region, which allows drivers who follow the KOD Sportsman tour to earn points towards the overall Mr. DIRTcar Sportsman title.

“My conversations with Mike and Cory were very productive. They are great guys who are trying to build up regionalized programs for divisions such as Sportsman Modifieds and we fit right into their plan. I’m both humbled and excited for the opportunity to offer this to drivers who follow King Of Dirt Racing,” said KOD Promoter Rob Hazer.

How it works is rather simple; nothing changes for King Of Dirt Racing, as it’s business as usual since the series mirror’s the DIRTcar rules for the most part. The King Of Dirt Racing point system remains the same and all finishes with current point standings will be reported to DIRTcar point’s keeper Gary Spaid.

At the conclusion of the King Of Dirt Racing point season for the Sportsman Modifieds, drivers will earn bonus points towards the overall Mr. DIRTcar Sportsman chase with a scheduled six ‘challenge’ or ‘combined’ races in the fall. The top 25 drivers in KOD Sportsman Modified point standings will receive the bonus points heading into the aforementioned fall specials, which include Fulton Outlaw 200, Weedsport Speedway, Brewerton Speedway, Super Dirt Week at Oswego Speedway, Brockville Speedway, and The Dirt Track at Charlotte.

“I liked the proposed setup of the regions and how it all worked when Cory Reed explained it to me. It gives KOD drivers a chance to be part of some awesome

races at the end of the season and he explained many other benefits of being the DIRTcar East Region,” continued KOD Promoter Rob Hazer.

Benefits offered to King Of Dirt Racing tour drivers are sure to open eyes beginning with the KOD champion being a guaranteed starter at the Super Dirt Week Championship event at Oswego Speedway, as well as being invited to the DIRTcar banquet to be recognized as region champion.

The top drivers from the King Of Dirt Racing Sportsman tour will be eligible for provisional starter status available for each of the six ‘challenge’ races in the fall as well. DIRTcar holds open four provisional spots per race for the top 12 in points.

On top of these benefits any driver who wins a race on the King Of Dirt Racing tour, which serves as the DIRTcar East Tour, will be a guaranteed starter in the All-Star Invitational at the Dirt Track at Charlotte during the World Short Track Championships.

“When Cory mentioned our champion would be a guaranteed starter at Super Dirt Week I was instantly humbled that someone could represent our series and region among the best drivers the Sportsman Modified division has to offer. When he told me about the guaranteed starting spots in Charlotte for each feature winner on the King Of Dirt tour my jaw kind of hit the floor. That’s pretty awesome,” continued Rob Hazer.

Each King Of Dirt Racing Sportsman Modified driver who enters a series race will be eligible for the DIRTcar crate motor giveaway. The more races a driver competes in the more entries for the crate motor giveaway they receive. For example; run eight races, receive 8 entries.

Drivers will also have a chance to earn bonus points by competing through the summer in other region races. Any driver from KOD, which serves as the DIRTcar East Region, who races in DIRTcar Sportsman Series events in the North, Central, or West regions will earn 20 bonus points towards their bonus points.

Drivers may compete is as many DIRTcar Sportsman Series events as they choose and earn additional points towards the Mr. DIRTcar Sportsman championship by competing in regions outside his and/or her specific region. DIRTcar will award 20 bonus points per attempt up to a maximum of five for a total of 100 bonus points. These will be added to a driver’s home track and regional bonus point total.

“I think the alliance with DIRTcar will work out well for King Of Dirt drivers and tracks. Drivers can tour the eight scheduled KOD races and earn rewards from both the series and DIRTcar now, while tracks may see some names they haven’t before trying to earn bonus points. I’ve been trying to get some of DIRTcar’s big boys of the Sportsman division at the Nationals for a while now.

2017 will be the most challenging year yet for drivers trying to earn the King Of Dirt Racing Sportsman Modified crown. The alliance with DIRTcar Racing to for the East Region through KOD will surely bring out the heavy hitters at each event.