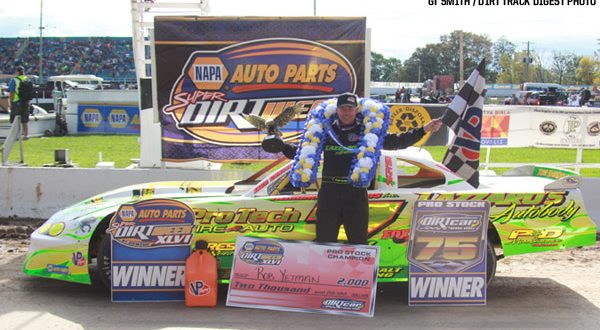 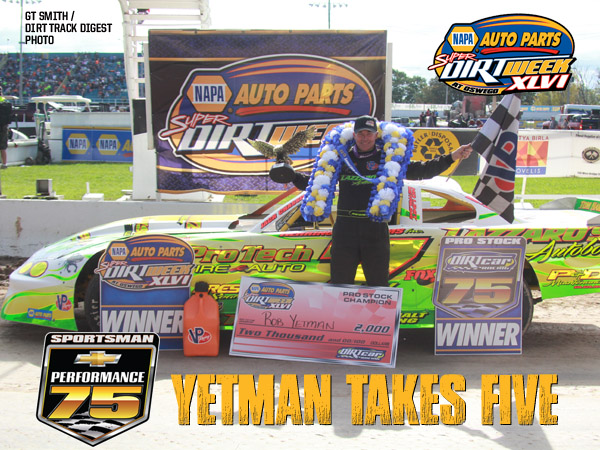 “I didn’t think I would ever win one of these, and now we’ve won five in a row,” Yetman said.

Yetman edged fellow front row starter Rich Crane into turn one and never looked back. Crane would go on to lose his fuel cap during a pit stop and never recovered.

The 75-lap event was plagued with cautions, including a stretch where 16 of 18 laps recorded were under caution.

Rich Duzlak took a wild ride flipping his No.29 multiple times bringing out the Red Flag. Duzlak walked away from the incident uninjured. An open red allowed teams to refuel and strategize a way around the No.7 of Yetman halfway through the event.

While Yetman was not challenged on most restarts, the lap 51 restart was the most intriguing of the event as second place Kim Duell shot out of a cannon to the lead, but was immediately called back for jumping. “There was no catching Rob. We tried hanging with him on that start, but got yelled at,” Duell said with a smile.

Yetman continued control as Jocelyn Roy challenged Duell for second. The final caution of the event came with four to go, but once again no one was able to threaten Yetman as he crossed the line 1.037 seconds ahead of Duell.

Yetman was proud of his team, “This is a huge effort. Preparing for Super DIRT Week is huge effort. All the hard work and dedication pays off for moments like this.”

Duell was extremely pleased with his team’s effort. “You couldn’t give an inch out there. Our plan was to take care of the car and stay out of wrecks. We were able to do that and we are ecstatic with this finish,” he said.

Jocelyn Roy completed the podium and applauded Duell for racing well, “Kim and I had a very clean, hard run. I can’t thank my pit crew enough for their efforts this week.”