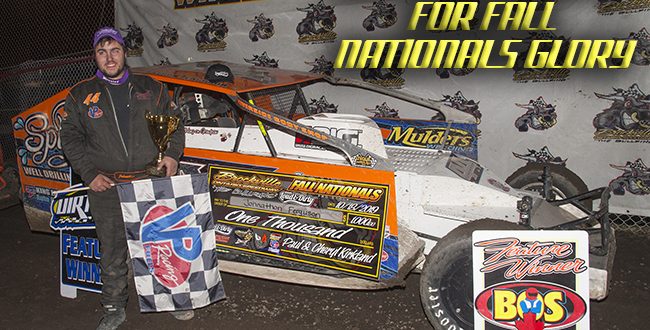 Root and Rouse were the class of the field for a majority of the race before Johnathon Ferguson turned up the heat.

“We were tight to begin with. I started falling back there for a bit. The track started loosening up and came to us a little bit,” said Ferguson. “After that last restart, I got a good start behind Rouse. I was right on his back bumper in turn one and made the pass.”

Ferguson and Brianna Ladouceur had a front-row seat for the seesaw battle between Root and Rouse, who traded the lead several times throughout the first 40 laps.

“They were racing right beside each other and they were racing hard. I didn’t think we had anything for them. Then I got passed Root on a restart in one and two. He checked up and I got by him. I knew Rouse was running the middle and I didn’t want to go low, so I went to the top and it paid off,” Ferguson said with an excited laugh.

“It’s the Fall Nationals! It’s a DIRTcar Sportsman Modified Series race! It’s an awesome way to cap off the year.”

Second place runner and Western Region Champion Brad Rouse never had much luck at Brockville and is coming off a particularly difficult NAPA Super DIRT Week at Oswego as well as the satellite shows.

Rouse thanked his crew for their tremendous efforts in getting the No. 18R back on track.

“My crew busted their butts to get me out this week after a rough week at Oswego.”

After a strong season out West and in the Fall Championship Series, Rouse finished the year fifth in Series points.

“It’s the last race of the year here so I’d like to have won it. But we don’t usually run well here so running with Kevin Root and being up front was awesome.” 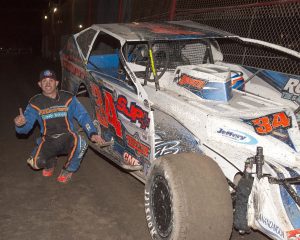 Kevin Root is now the fifth driver in history to go back-to-back in DIRTcar Sportsman Modified Series Championships. Root capped the Series points races with a strong podium finish after battling hard with Rouse for the lead.

“We’ve been really good out of the box all year. Very consistent. We were able to win the Land of Legends Raceway Track Championship, we won the DIRTcar Sportsman Modified Series Central Region, and now the overall Series Championship,” said Root.

“I can’t thank everyone enough who helps me out. It’s my dream to run a race car and do what we do.”

Matt Janczuk’s NAPA Super DIRT Week XLVIII had the highest highs and the lowest lows as the Sportsman pilot went from trying to fit a destroyed race car back in the hauler to dancing on the roof in Victory Lane with a borrowed car.

Janczuk was forced to transfer through the Last Chance Showdown and he made the best of it picking up a fourth-place finish after starting twenty-first making him the Hard Charger of the race.

The recipient of the random Hoosier Racing Tire Free was Cedric Gauvereau who finished seventh in the 30-car field.

Next up the is a non-point race at The Dirt Track at Charlotte for the Driven Racing Oil World Short Track Championship October 31 to November 2. We hope to see everyone there.