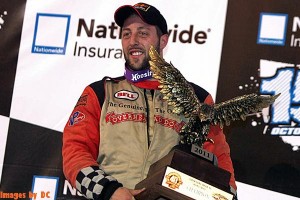 Williams, 21, of Pittsgrove, N.J., ended two years of torture at Super DIRT Week, driving to the biggest victory of his young career in the caution-plagued 30-mile Championship event.

In two previous Super DIRT Week Sportsman starts, Williams had found speed in qualifying but never the finish line in the feature. He won the DIRTcar Sportsman Futures feature and started from the outside pole in the in 2009, but he was eliminated quickly in a massive opening-lap crash. Last year he set fast time and was running third in the headliner when a sheared left-front hub forced him into the inside berm and knocked him out of the race.

Williams, who set fast time for the second consecutive year to earn the pole position starting spot for Saturday’s 30-lapper, might have thought he was in for another crushing defeat when outside-polesitter Cody McPherson of St. Catharines, Ont., and Bobby Hackel IV of Rensselaer, N.Y., used the outside lane to shuffle Williams back to third at the initial start. But Syracuse luck would be on the side of Williams for a change; a tangle brought the caution flag out before the lap could be completed, putting Williams back into the lead.

“We’ve been fast the past two years here but never have any luck,” said Williams, who drives a car owned by Sal DeBruno of Vineland, N.J. “Today we finally had some luck with that first-lap caution. Seeing those guys pass me on the outside on the initial start showed me how good the outside was.”

Williams utilized that outside groove for the rest of the race, pacing the field and he fended off relentless attacks from Hackel and Tim Sears Jr. of Clay, N.Y.

Despite an onslaught of caution flags that slowed the race’s pace, Williams led every lap to pocket a cool $4,000 top prize.

“I’ve dreamt of winning this race since I first came here,” described an ecstatic Williams. “We finally pulled through today. This is just awesome.”

The victory was the DIRTcar Sportsman Series win of Williams’s career.

“The caution flags really scared me,” said Williams. “Whenever you’re here you know you’re running against the best of the best. They really made me earn it today.”

Finishing second was the 17-year old Hackel, who also picked up Rookie of the Race honors.

“This is just such an awesome event,” said Hackel, a fourth-generation racer. “Everyone worked so hard on getting us here and I’m really happy it all paid off.”

With his third place finish, Sears extended his points lead over Josh Van Brocklin of Watertown, N.Y., who struggled throughout the event after losing his primary motor on Friday.

“We haven’t run well here in the past so we’ll take a third. It was a really good points day for us,” Sears said. “We should be in good shape for Brockville (Ontario Speedway) next week.”

Next for the DIRTcar Sportsman Series is a visit to Brockville Ontario Speedway during the Fall Nationals on Oct. 16. The division’s 2011 champion will be crowned after the event.