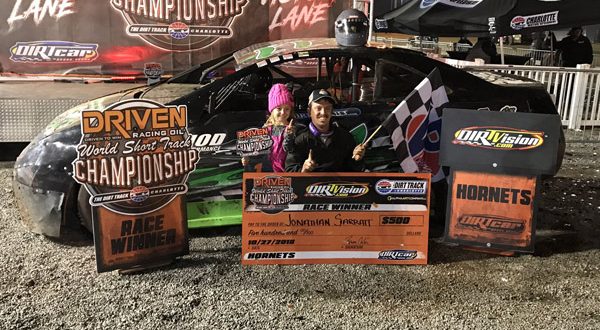 DIRTvision FWD/Hornets Swarm Over The Dirt Track at Charlotte 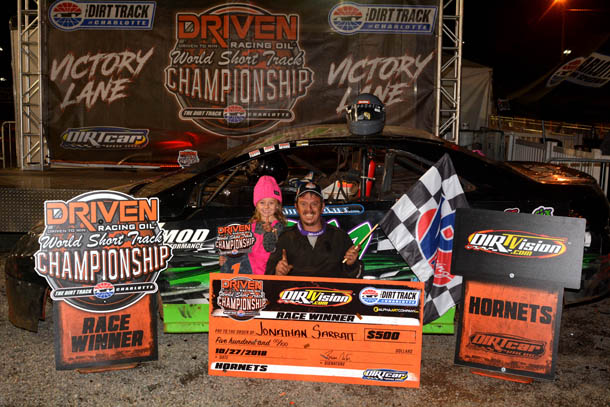 The DIRTvision FWD/Hornets showed up in droves and swarmed The Dirt Track at Charlotte for the Driven Racing Oil World Short Track Championship. Driver Jonathan Sarrat won the first and fourth Feature races, while Eddie McGrew and Robert Arch aced Features two and three. The Hornets thrilled the crowd with two, three, and four-wide racing all across the .400-mile Carolina clay racing surface.

Jonathan Sarratt won two 15-lap Features: ““We’ve won a lot of races and ran in a lot of lapped traffic. We just figured out how to get through there without running over anybody or taking anybody out on purpose.” Sarratt was happy to bask in the glow of the Driven Racing Oil World Short Track Championship Victory Lane lights. “I just want to thank K-Mod, Shelby Towing, all my family and all my friends, and the good Lord above to let us race here this weekend and more importantly Charlotte Motor Speedway.”

Sarratt made went for two wins last year but came up just short. “It means a lot. We came here last year and tried and tried. We finished second the first night and third the second night. It means a lot to us.”

DIRTvision FWD/Hornet Feature two was the most hotly contested Feature of the four. Eddie McGrew and Jay Johnson battled lap after lap for the win, right to the checkered flag. “This is 2 years in a row. Me and Jay Johnson ran door-to-door. Every time we run here and runs me clean. Little bit of rubbing but that’s what the fans pay for, to see us rub and race.”

McGrew’s trip to Victory Lane at The Dirt Track at Charlotte is one he’ll never forget: “This is the absolute biggest day of my life. I got my whole family, my wife, my crew chief, my car owner, all my people right here.”

Winner of DIRTvision FWD/Hornet Feature number four was asphalt Late Model spotter Robert Arch. His victory howl was heard far and wide in the Driven Racing Oil World Short Track Championship Victory lane. “It’s always awesome being able to drive. I enjoy spotting for all the asphalt stuff but when I get to come and race dirt, it’s so much fun. I got in the truck this morning at 6:00 AM with my buddy, he’s all I got that I could con into coming with me and when he got into the truck I said, “I’ll be happy if we run top ten.” Everything worked in our favor and then we sat on the pole and won the race! I just won at Charlotte! That’s awesome! It’s one of the best things I’ve ever done as far as a driver,” Arch said.

Robert Arch wasn’t just racing for himself this weekend. His thoughts were with a friend facing the challenge of her life. “Everyone saw the pink car. It’s for a friend of mine. She got diagnosed with breast cancer. I put this pink wrap on it. We kept fighting all day to get here and I hope she keeps fighting and she beats it too.” 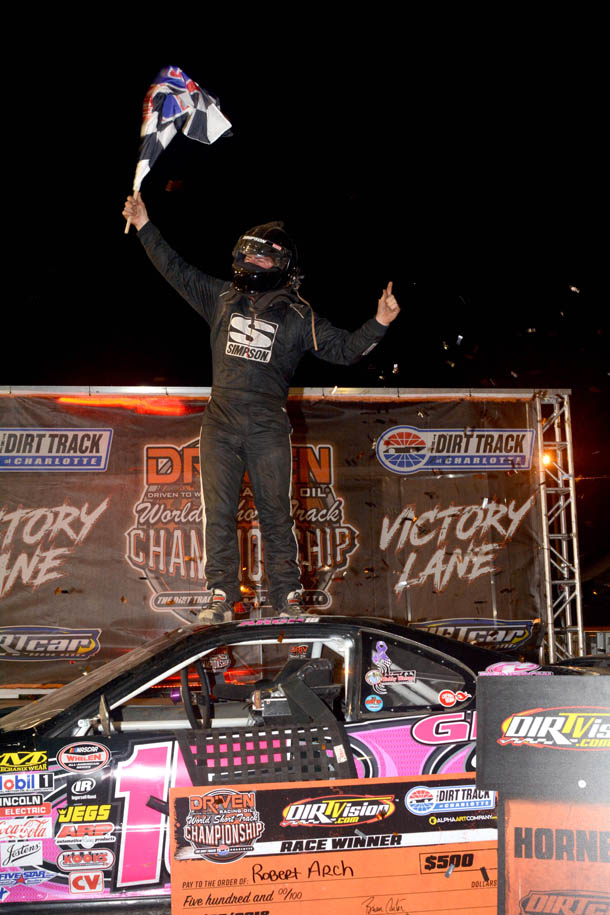 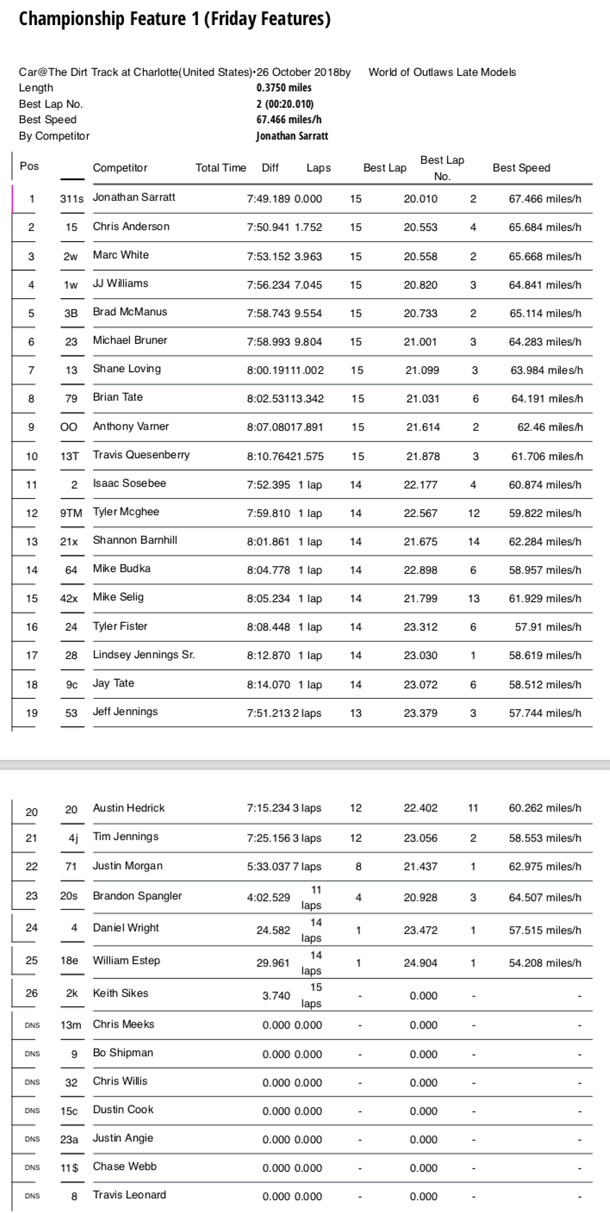 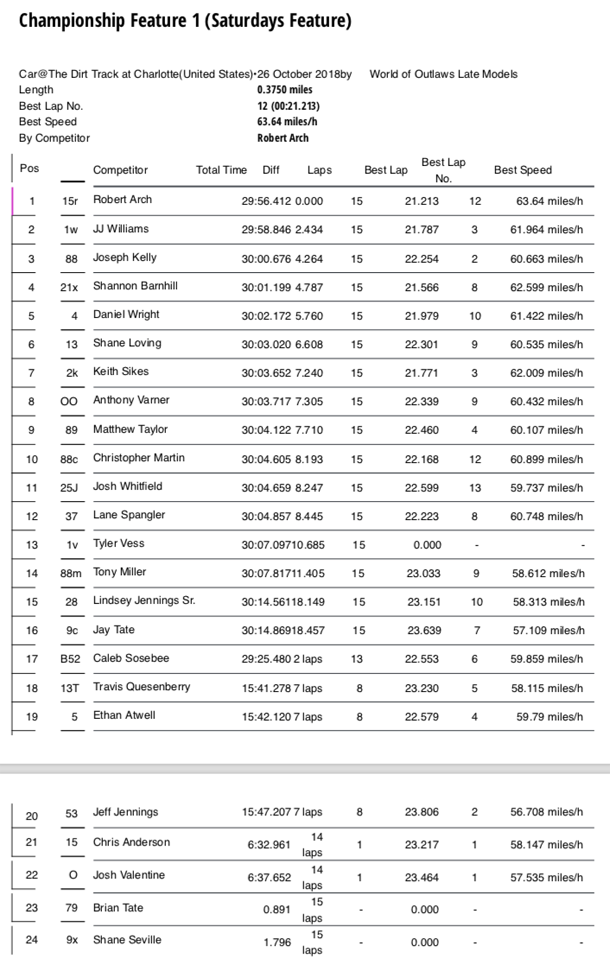 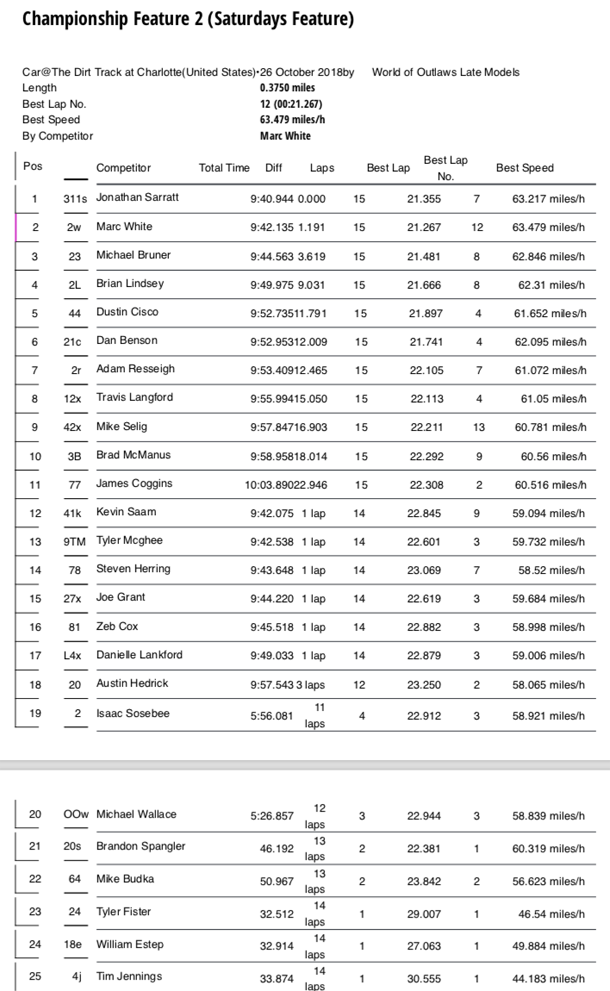